The movie, The Best Exotic Marigold Hotel,  is described as being about this: "British retirees travel to India to take up residence in what they believe is a newly restored hotel. Less luxurious than advertised, the Marigold Hotel nevertheless slowly begins to charm in unexpected ways." 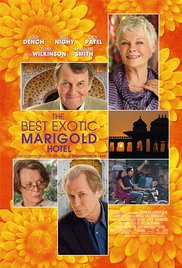 To me, the movie is about people who are my age – 60-plus – who have had to find new ways of carrying on with their lives. Some have suffered loss of a spouse, as I have. Others have had situations happen to them which have forced them to consider where they will live and how they will live comfortably. Some are simply looking to keep on living, with gusto.

The movie spoke to me on many levels. I loved the characters. They're real - sharp-witted, somewhat cranky, oddball, honest, brave, intelligent, lovable, or some combination of those traits. I loved the main actors – who doesn't love Judi Dench, Maggie Smith, and Bill Nighy?

But most of all, I appreciated the wisdom in the writing. I won't spoil the storyline for you, but kudos to Deborah Moggach, who wrote the novel (I must buy the book now!), and Ol Parker, who wrote the screenplay. Well done.

I accidentally watched “The Second Best Exotic Marigold Hotel” last week and I enjoyed it a lot. Then my children, who are often wiser than I about these things, informed me that the first one was very good as well.

So I spent more than two very enjoyable hours last night ... err... early this morning, since those are the hours one keeps after the death of a spouse ... watching and loving every minute of the first Best Exotic Marigold Hotel.

It led me to have a good night’s sleep for only the second time in the almost four weeks since my husband, Al, died.

The movie gave me a few smiles, some clever dialogue, and some strong, relatable characters with real-life problems and solutions. Most importantly, the movie gave me a sense of peace and more courage to carry on. It helped reinforce the knowledge that there is more for me around the corner. I will heal eventually. I will never be the same. I will always carry Al with me in my heart and in everything I do, but I will be able to do new things, have new experiences, and feel happiness again – eventually. Hopefully.

I am sad to tell you that our beloved Al Driver passed away from colon cancer on Monday, January 4, 2016, at about 10 p.m. at the Regina Wascana Grace Hospice. I was with him at the time, as were several nurses. He passed peacefully. The previous few days had been particularly difficult for him and us, so his passing was a blessing of sorts.

An obituary will appear in the Regina Leader-Post (via Speers Cremation and Funeral Services) within the next few days. (Obituary link) A service celebrating Al’s life (primarily organized by Al before his passing) will be held on Saturday, January 23, at 2 p.m., at Westminster United Church, 3025-13th Ave, Regina, SK. At Al’s request, please wear bright colours to celebrate the laughter and love that he shared with the world.

Flowers gratefully declined. Anyone wishing to make a donation in memory of Al may do so to Heritage United Church, 1050 N. Arnason St, Regina, SK S4X 4K9.

Thank you so much for your love and care of our family during these past four and a half months. Cancer can be cruel and we felt you holding us up during those times on this journey. Please continue to hold our family and extended family in your thoughts and prayers in the days ahead.

The final word goes to Al, who chose this poem for his memorial card:
Death is nothing at all.
It does not count.
I have only slipped away into the next room.
Everything remains as it was.
The old life we lived so fondly together is untouched, unchanged.
Whatever we were to each other, that we are still.
Call me by the old familiar name.
Speak of me in the easy way which you always used.
Put no sorrow in your tone.
Laugh as we always laughed at the little jokes that we enjoyed together.