The Introvert In Me

A friend drew my attention to this wonderful blog called Things You Should Know About Introverts.

It cracked me up.

And it explained a lot about me. Mostly.

For years, I harboured the notion that my natural curiosity and journalism training were the reasons that I prefer to stay in the background and observe.

It was only a few years ago that another friend described himself as an introvert. I laughed. That didn't make sense to me. This man talks to a crowd regularly as part of his job. I couldn't understand how he would think he is an introvert.

Then he informed me that I, too, am an introvert. "It's not about how you act. It's about where you get your energy from," he told me.

Turns out I'm an introvert because that label defines how I get energized, not how I behave.

I sometimes like silence punctuated with my favourite music. No talking.

I need to recharge alone.

I can speak to a crowd and I can also talk to people and sell books all day at a trade show, but I need a nap afterwards - or at least a good long time of just sitting alone to decompress.

I have to force myself to hang around after an event to visit with folks.

And I am okay with people cancelling plans on me, but it doesn't happen that often because (1) I work from a home-based office, so there aren't that many parties going on around here; and (2) I've figured out how to accept invitations only for things I really want to attend. (You can do that when you're older and more established in your career.)

I am a writer. A creative person. There is always something going on in my head that keeps my wheels turning. I wouldn't exactly call my inner thoughts 'epic' - at least not all the time - but I do have some pretty good ideas just itching to get out and these are enough to keep me occupied most of the hours of every day.

I know I have a lot of company when it comes to introverts who are writers or involved in creative industries such as publishing. We folks get energized by standing back, watching the world, forming our opinions, presenting our views or expressions of creativity, then moving on to something else.

We're okay with being alone, most of the time. Except when we've finally come up with that snappy reply to that smart-aleck statement or question. That's about the only time we wish we were still hanging around in that crowd of people.

Posted by Deana Driver at 8:23 PM No comments:

So there we were - on Day Four of our visit to St. John's, Newfoundland - standing in the foyer of a quaint restaurant called Classic Café East, not far from the bottom of Signal Hill. 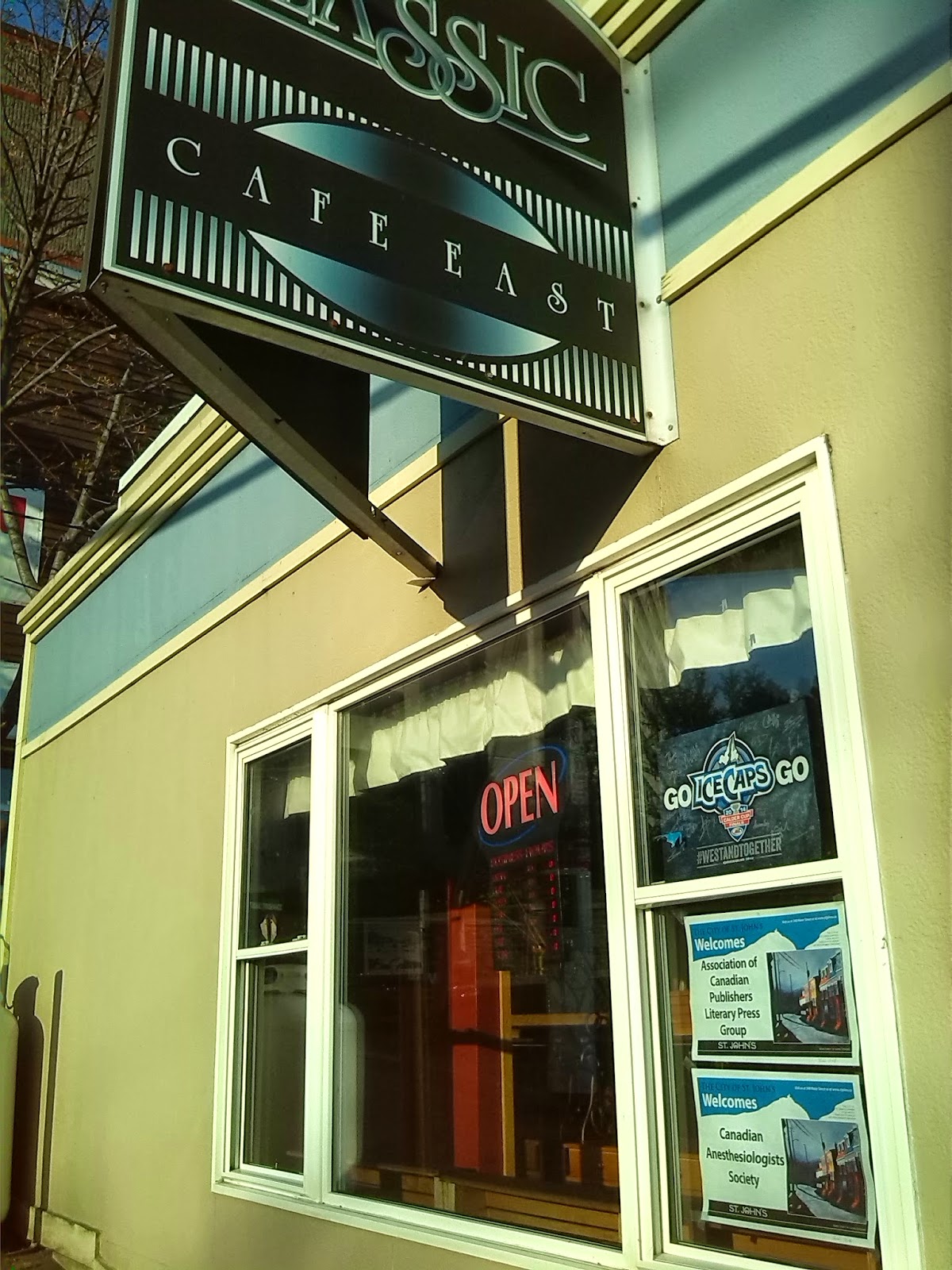 Al and I were looking at the menu, deciding whether we'd go into the restaurant to have some supper or not, when a man stopped in front of us, stuck his head into our line of vision and said, "You won't find better food for a better price anywhere in St. John's!"

"Alright, then," I said. "You've sold us. We're comin' in!"  (Al and I had already seen some items on the menu for each of us, but his friendliness helped seal the deal.)

The waitress, meanwhile, was standing at the counter a few steps away, and started teasing the man. "What are you saying, John? You bothering these people?"

And then to continue the teasing, I added, "He might be your husband for all we know - saying such nice things."

At which point, the waitress - as she was seating us - yelled across several other tables to the back of the restaurant, where John had gone to sit: "Did you hear what she said, John? She said we could be married!"

Oh, geez. What have I done?

I was getting a bit flustered. The Newfies had turned the game on me.

Oh, my. This was more than I had anticipated.

(Note to self: Don't joke with a Newfie unless you're ready for a quick comeback.)

It all worked out well. We had a few more giggles with the folks in the restaurant, looked at the menu, accepted menu advice from the waitress, and placed our order. 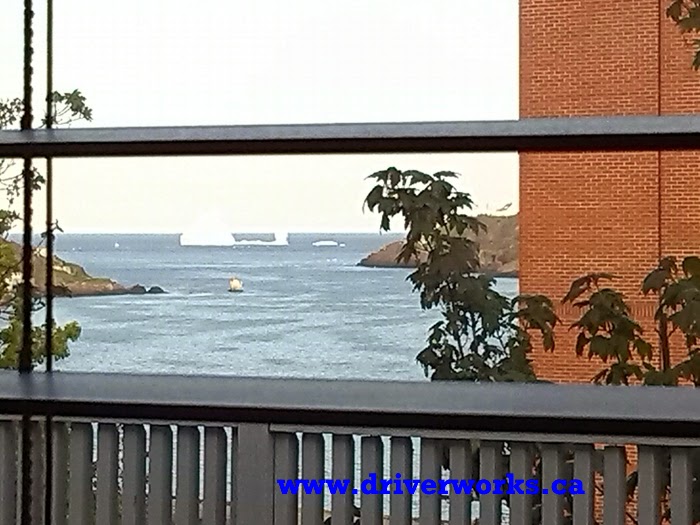 As we waited for our food, we enjoyed the view of the entrance to St. John's Harbour, which we could see from the restaurant's windows and patio. There were icebergs out there, and we Prairie folk loved looking at them.

We weren't too daring the first time we ate at Classic Cafe East, but we went back a few times during our stay. We enjoyed some great Newfoundland-flavoured foods including seafood chowder with huge chunks of salmon in it, seafood au gratin (below left), and touton (below right), which is a deep-fried piece of bread dough that tastes like a donut/french toast combination. The locals eat touton with molasses. We don't care for the taste of molasses, so we used syrup. Pretty darn tasty. 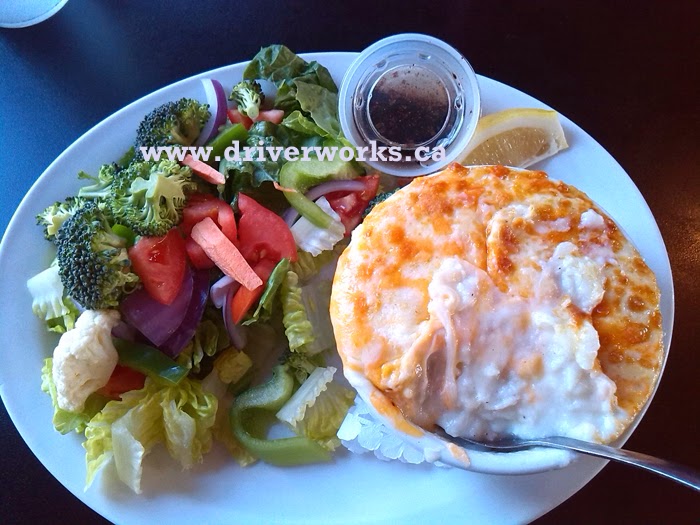 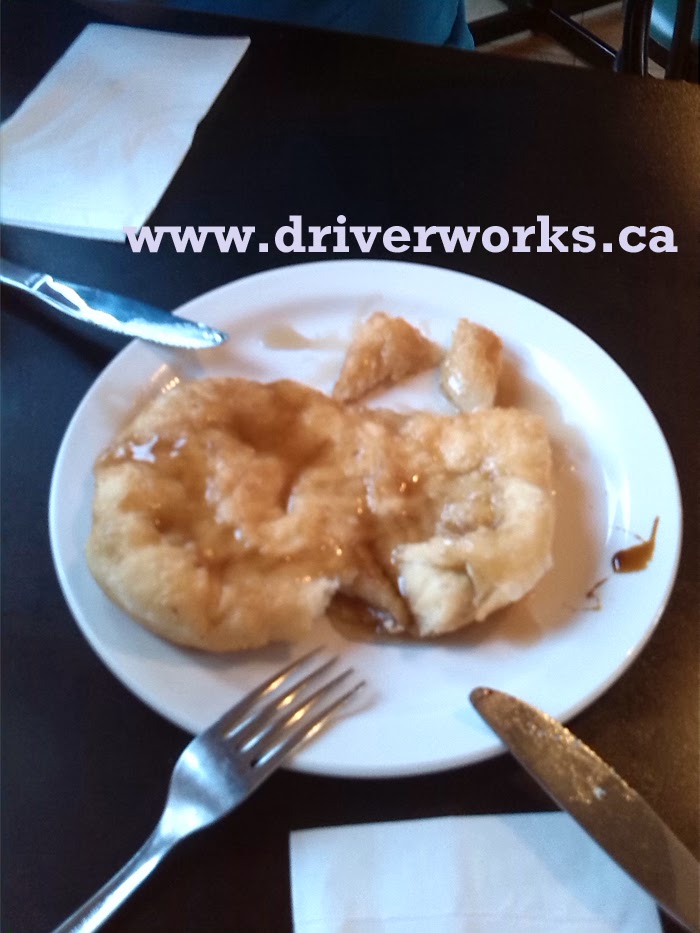 We didn't try jig's dinner or cod tongues. They didn't appeal to us, but other people seem to like them.

On our third visit to the cafe, John was there again. This time, his actual wife, Helen, was there with him. They invited us to sit with them for lunch, and we enjoyed conversation which included their recommendations of sites we should visit in the area.

We had not booked a rental car before we got to St. John's. We incorrectly assumed we could rent one on the island, but every agency there was out of cars for the next few days, so we were getting around by taxi or by walking, we told them.

This prompted John to ask, "Are you up for a bit of a walk? I could drive you over to the lighthouse and you could walk back." 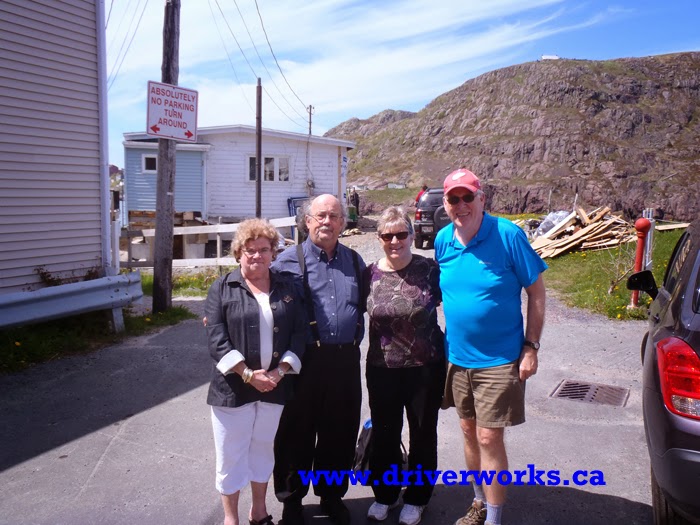 Here we are with our new Newfoundland friends, Helen and John Greenland, as they dropped us off just down the hill from the lighthouse at Fort Amherst, across the harbour from Signal Hill (a portion of which can be seen behind us). 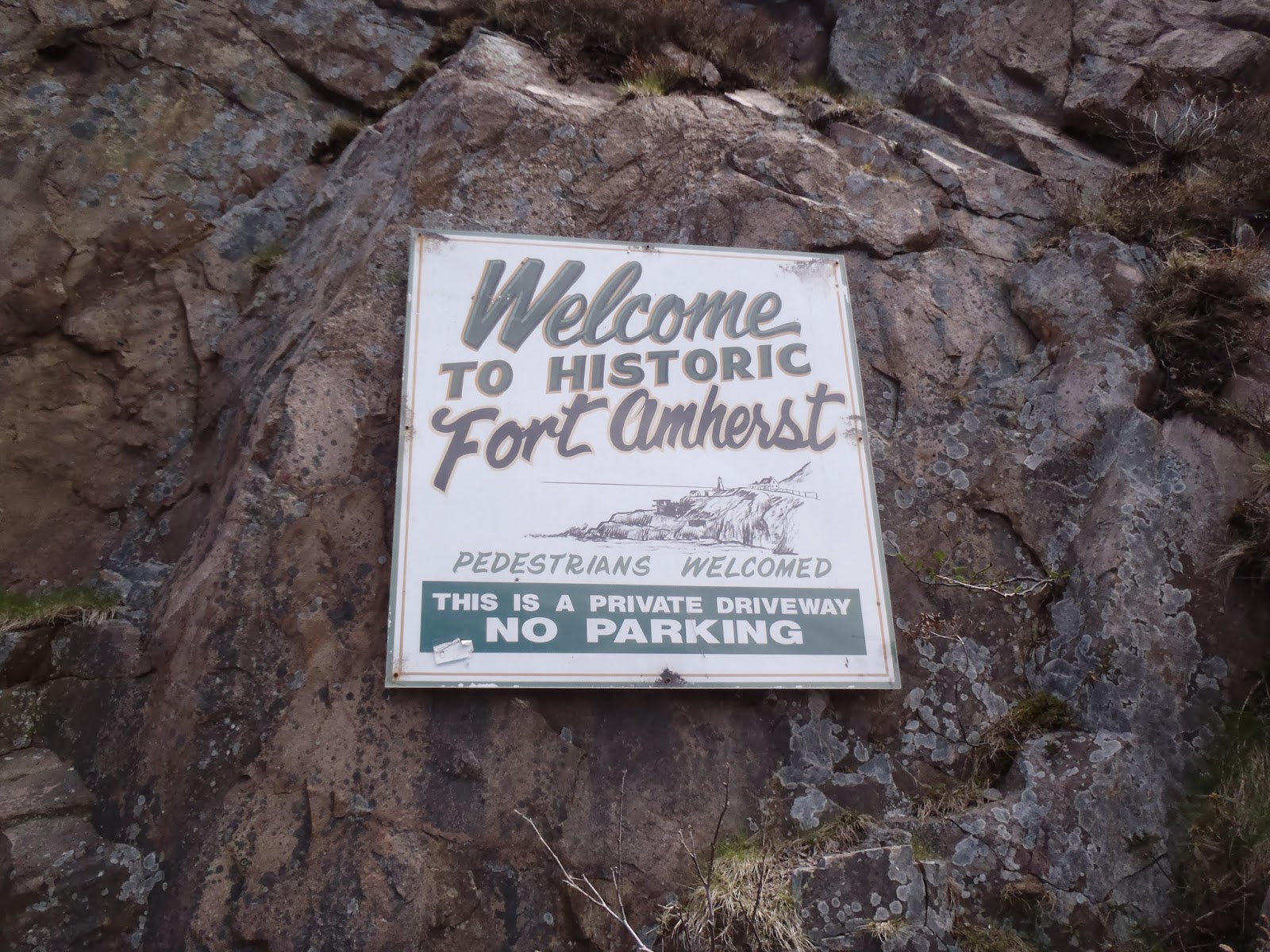 There were numerous homes along the rocks leading up to the lighthouse (below). We were intrigued, and wondered how these Easterners manoeuvred up and down those roads in the wintertime. 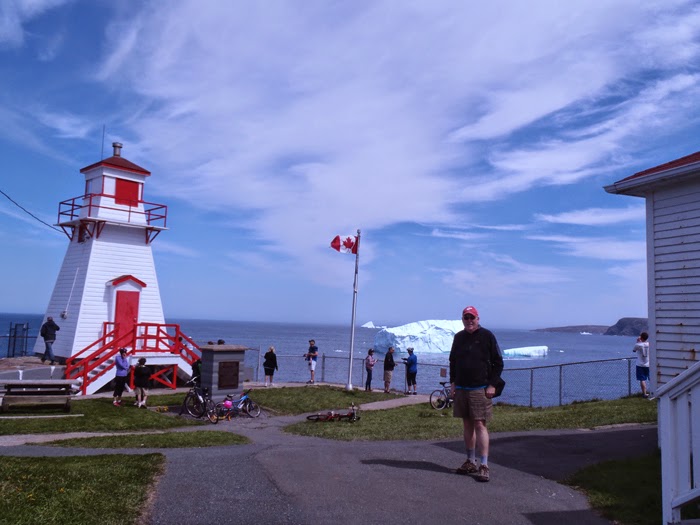 We had a nice view of some icebergs and Cape Spear (on the right), from the lighthouse area. 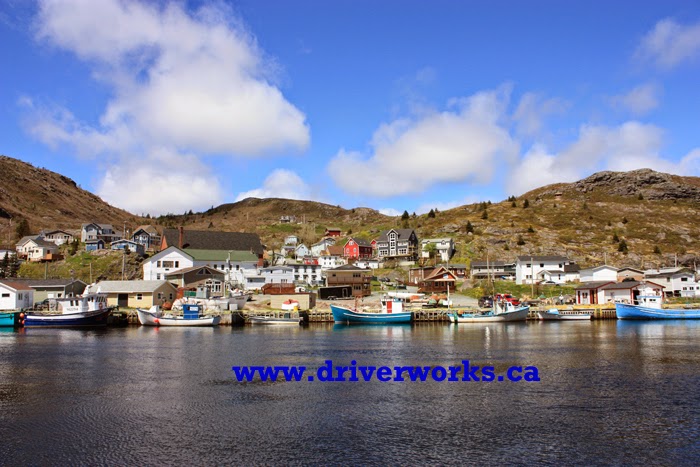 We also enjoyed the scenery on what would become a longer-than-we-anticipated walk back to our hotel. 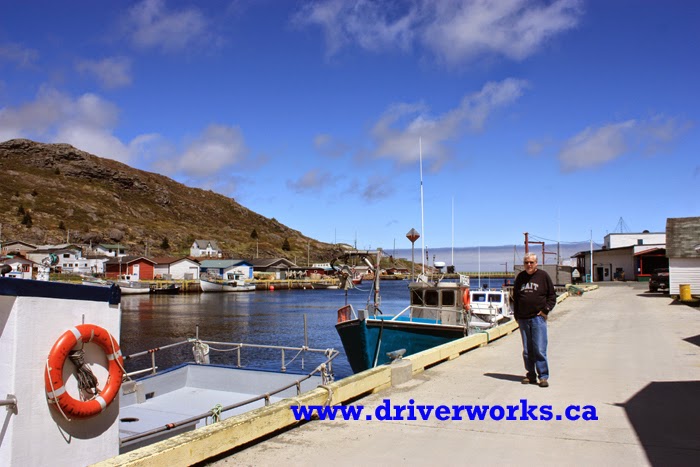 The houses and boats on both sides of the harbour lend themselves to a typical Newfoundland scene on a beautiful sunny June day. 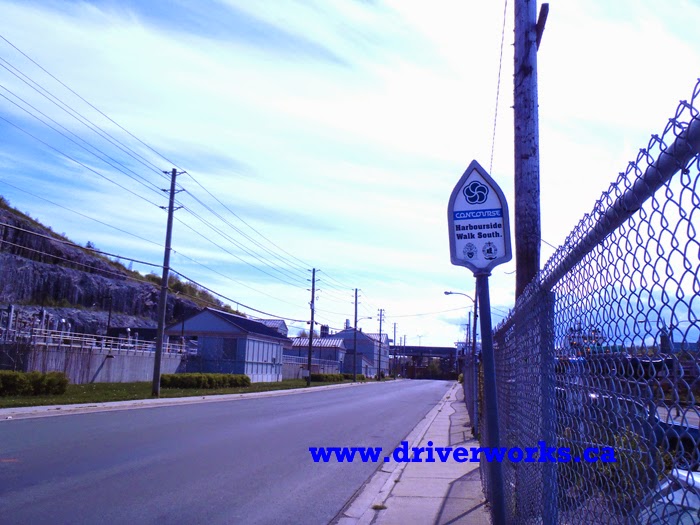 About 30 minutes into our walk, we came upon a sign that announced we were on "Harbourside Walk South'.
Although a little tired, we were thankful to be taking this leisurely stroll along the harbour because we saw so many sights we are sure we would have missed if we had been driving. 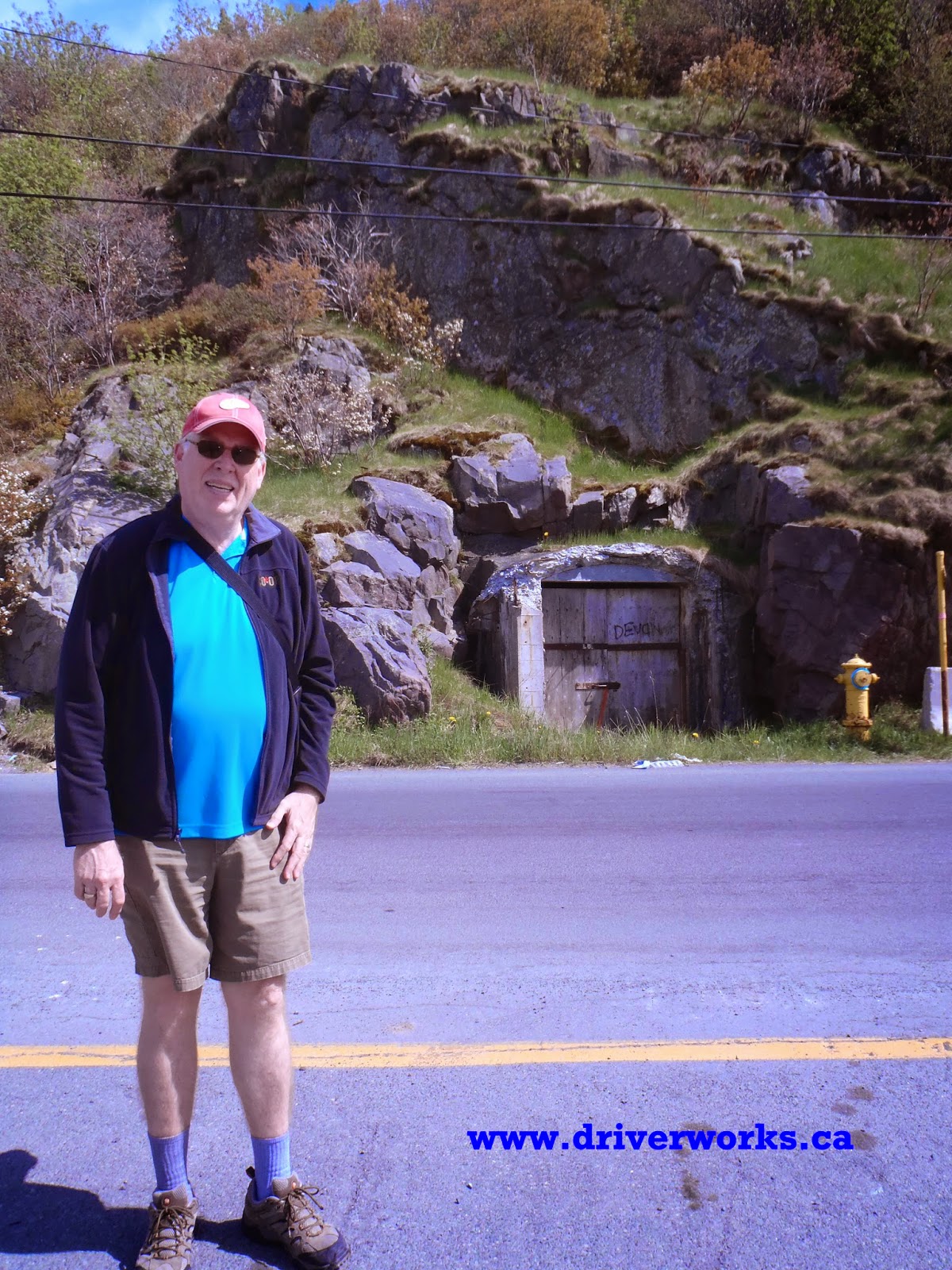 The Canadian Navy used to store ammunition and other supplies in holes they made into the rocks along the harbour. Amazing. 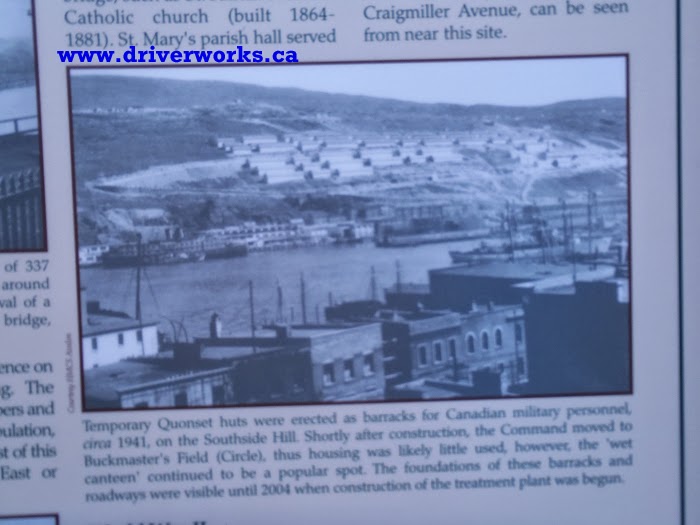 This photo from a display at the harbour shows the temporary quonset huts the Canadian military erected in 1941 on the Southside Hill. They weren't used much, but the sheer number of them took my breath away. 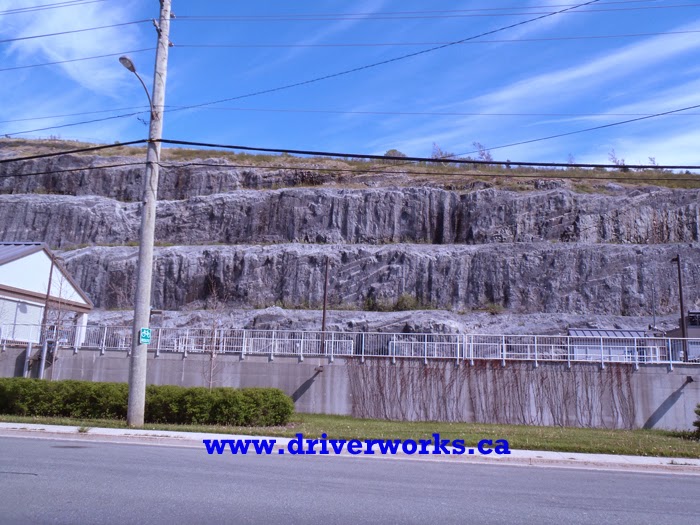 The modern-day treatment plant was built on that spot in 2004.

We walked for more than one hour to get back to downtown St. John's, stopping at the Railroad Museum for a drink of water. We hadn't planned on the hike, so we hadn't packed anything with us, and we were impressed with the friendly young summer staff of the museum, who went out of their way to help these old(er), parched visitors.

After almost two hours, we had walked around almost the entire harbour. We were just a few blocks  from the cafe where we started when we came across this humbling, beautiful memorial to Canadian Terry Fox, who lost his leg to bone cancer and vowed to run across Canada to raise funds for cancer research. 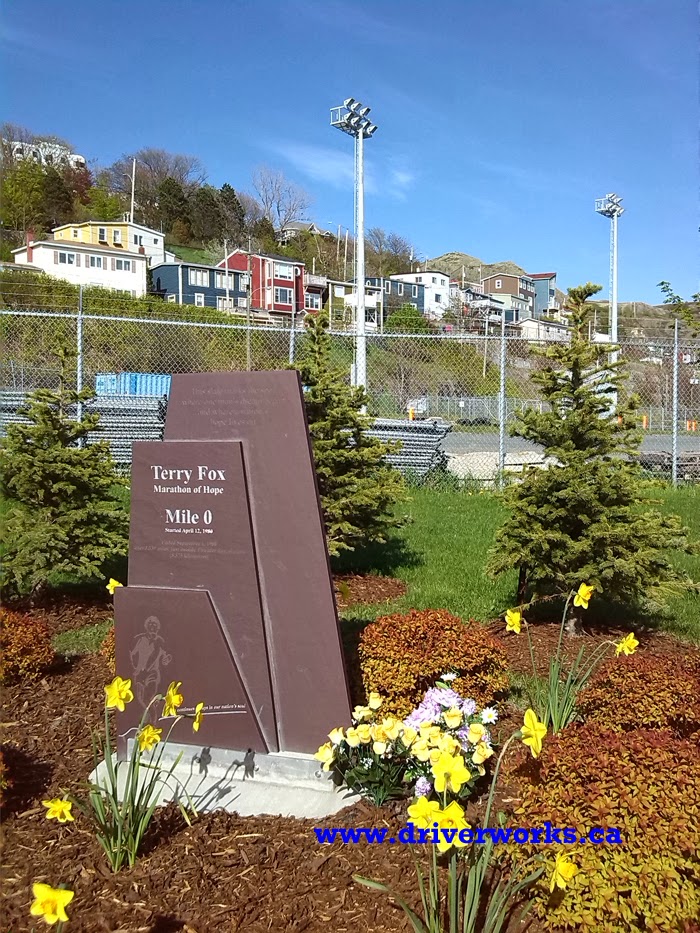 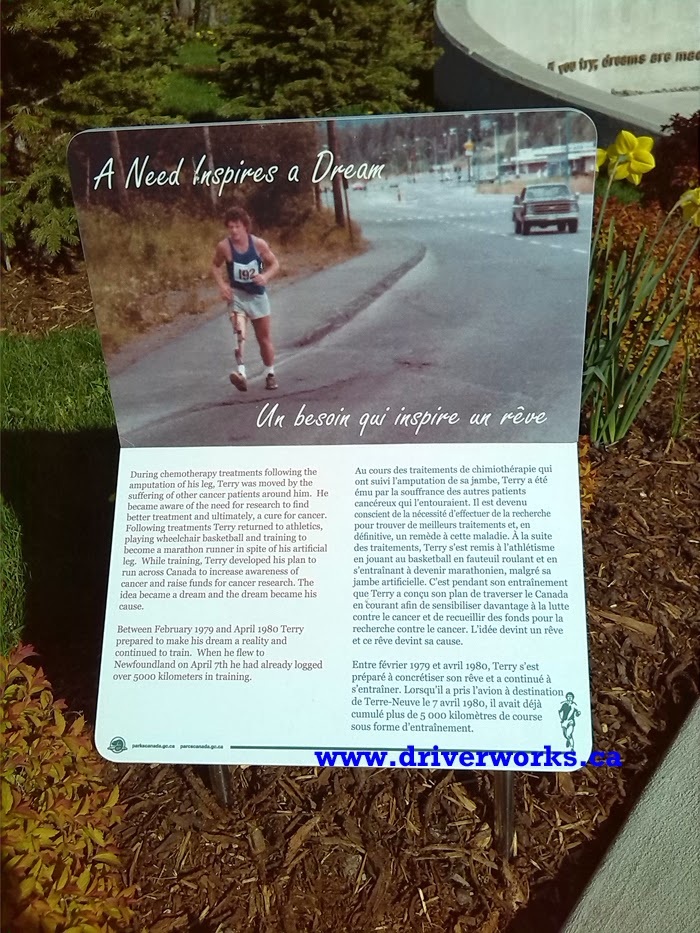 The details of Terry's life and his Marathon of Hope were honoured in several spots around this park.

The larger-than-life statue of Terry Fox was inspiring. 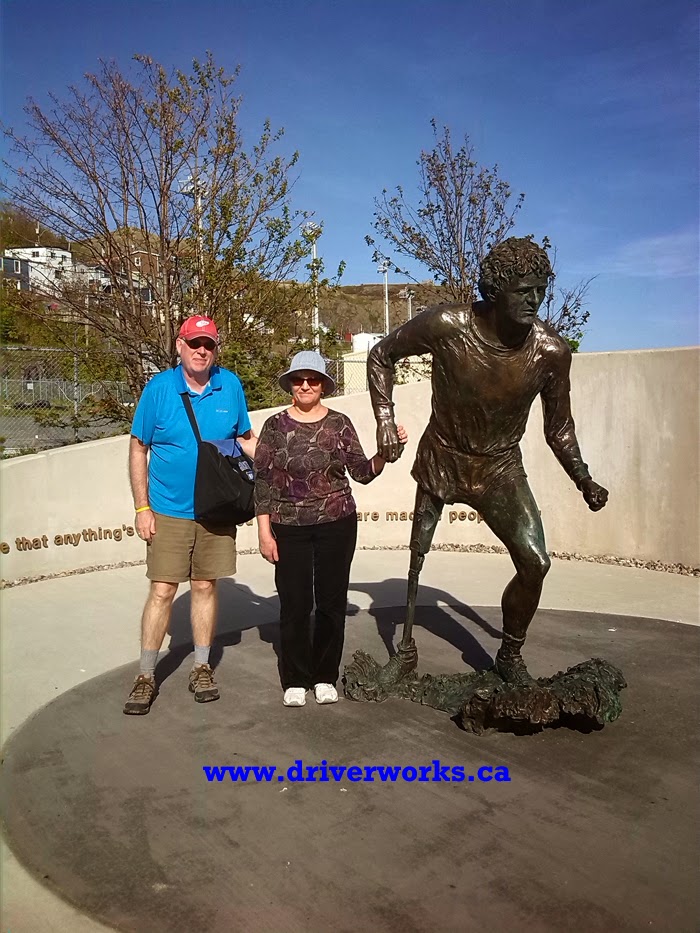 You can blame it on me just finishing up a two-hour walk, or the fact that my mother died of pancreatic and liver cancer in 2011, or that I am daily reminded of the strong eight-time cancer survivor Dionne Warner and so many others who fight against this ugly disease - but for whatever reasons, this statue got to me. I said a prayer for all who are affected by cancer, and I cried.

Four days later, after enjoying more of beautiful St. John's, Newfoundland and its surrounding area, I left a copy of my book The Sailor and the Christmas Trees at the restaurant for John and Helen Greenland. I wanted to thank John and Helen for their hospitality and show them a little bit more about the work of these 'mainlanders' whom they had befriended. 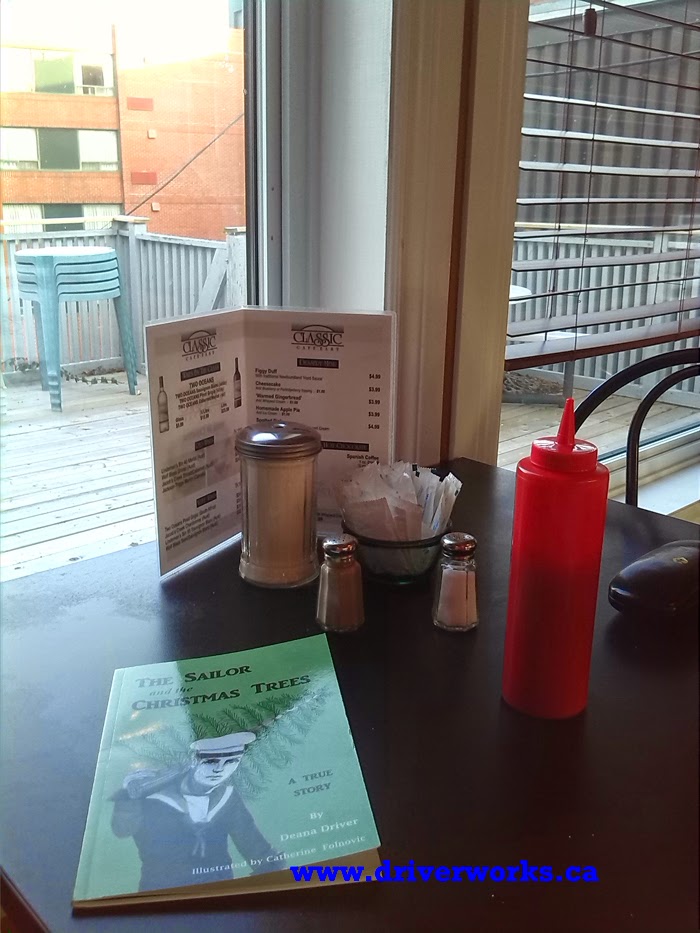 That main event in this true story began in St. John's Harbour in November 1945, and we were thrilled to have seen the harbour and so much more during our stay and during our intriguing walk.

We received an email from John and Helen after we returned home to Regina. They apologized for suggesting the extra-lengthy 'return walk from the Southside'.

No need to apologize, John. We saw a lot, learned a lot, and will cherish those memories forever.

As an aside, we were pleased to take copies of The Sailor and the Christmas Trees to the gift shop at The Rooms, an astounding building housing a multi-floor museum, archives and more in St. John's. The gift shop now sells copies of this fascinating true story, in the place where the story began. We are pleased. We hope you like it, too. 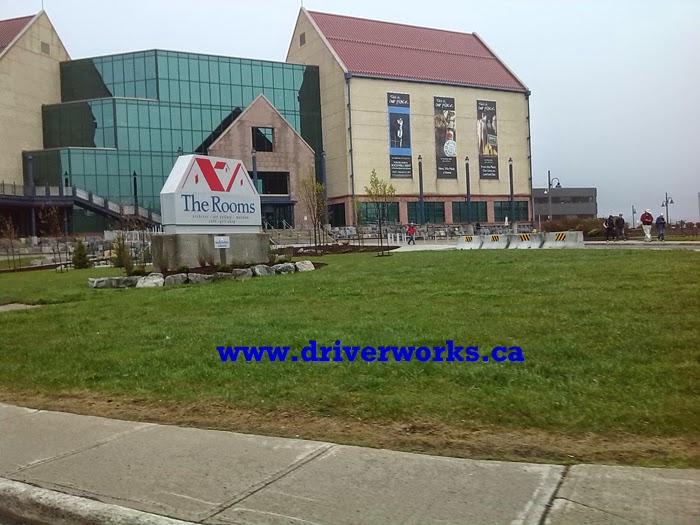 Posted by Deana Driver at 6:23 PM No comments: