My eldest daughter, Lisa Driver, as you may know, is an award-winning author, a spiritual healer, angel reader, life coach, and entrepreneur who owns Flight of the Phoenix Spiritual Healing.

This is Lisa's award-winning book:


I am an award-winning journalist, author, editor, and book publisher, and I am also an entrepreneur who founded DriverWorks Ink publishing in 2008.

This is one of my most popular books:

For months now, Lisa and I have been thinking about jointly leading a workshop for writers about the basics of writing and sharing a good story - whether it be their memoirs, a novel, or non-fiction about someone else.

Lisa would talk about the process of writing her book and what she learned that she can share with others, as well as what she knows from her background in communications.

And I would talk about the process of writing from my perspective as a long-time journalist, author of five non-fiction books, and a book publisher. (I have a little more experience in this writing and publishing stuff, but not necessarily more wisdom on all topics.)

So Lisa and I have set a date for this event to happen: 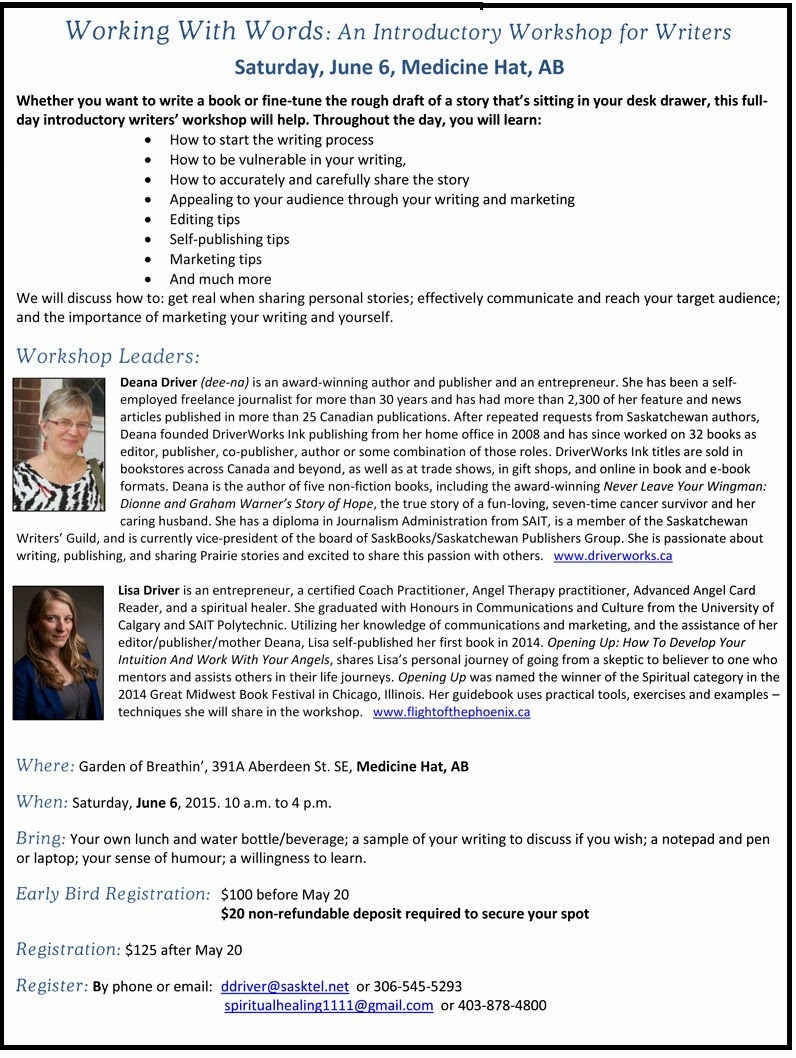 Please save the date, contact me if you need more information or wish to register. We hope to see you there.

Also, if you are interested in inviting me to lead a workshop or talk to a group in your area, let me know.

Posted by Deana Driver at 11:51 AM No comments:

What's in a Name? Authors Deana and Cornelia discuss Sabinka

I recently talked with Cornelia Bilinsky, one of the many wonderful people who submitted stories for our upcoming Cream Money book, due for release in late May. Cornelia grew up on a farm in Manitoba and now lives in Ontario. She is the author of several children's books, published by Pauline Books and Media, run by The Daughters of St. Paul in Boston. (I am constantly learning and meeting the nicest people in my line of work as a Canadian writer, editor and publisher.)

Our conversation began with me thanking Cornelia for submitting her memories of growing up on her family's farm. Then I let her know the details of when the book will be released - late May or early June.
I also asked her for clarification on how to acknowledge her contribution. Does she use the name Cornelia - which is how she signed her email - or Connie, which is what shows up in her email address?

This led to an exchange of further emails, including her giving me permission to share our conversation:
Cornelia:
Thank you, Deana, for sharing this news. I am pleased my submission will be included in the book and glad that donations will be made to a very worthy cause!
By the way, I've enjoyed reading a few of your blog posts!
Cornelia

Thank you for your comments, Cornelia – or do you go by Connie?
The stats tell me that there are people who are reading the blog posts, but I rarely hear from readers about them. It’s nice to hear from you that you are one of them.

Well, there's another story. My actual name is Cornelia. It was an unusual name in our Ukrainian community of Ethelbert, Manitoba. Some of my schoolmates in the one-room elementary school I attended had trouble pronouncing it. I remember resenting their mispronunciations. In my last year of high school, my closest friends nicknamed me "Connie" and the name stuck. Friends and family still call me Connie (and you may, too). However, I have learned to appreciate my real name and have always used it in all official correspondence and documents and, of course, as the author name in my books and other writings. After all, it is the name my mother gave me.
Connie (Cornelia)

Me:
Oh, now there is an idea for another blog post. I have always had trouble with people mispronouncing my name. That's why I finally added a pronunciation in my work emails.

Deana Driver (dee-na)
DriverWorks Ink
Proud Prairie Publishers
We also had trouble deciding what name we should call my mom for most of our adult lives. Her original Polish name (Sabina) was changed (to Sabinka) when she arrived in Canada. At university, she was given a nickname (Binkie), which she responded to for all of her adult life, but actually disliked. In her 80s, Mom finally told us what she really wanted to be called (Agnes, which is her middle name).
If I do decide to write a blog about this, can I please quote from your note about learning to appreciate your real name?


Cornelia:
What a poignant story about your mom! I think this kind of thing happened to many people who immigrated to Canada, and their children as well. My husband's name is Bohdan, but when he was in Grade One, the teacher decided he would be Bobby.
Your mom's experience illustrates keenly how a name is the key to self-identity. I'm in the process of reading The Book of Negroes. One of the things that really touches me is how the main character (a slave girl, captured in Africa at age 11) longs to hear someone call her by her real name, because it awakens in her the realization of who she really is. But, of course, to the slave traders, plantation owners and others, she is only a commodity, and they care nothing for her name.
Yes, you may quote me if you like and you may use the name my mother gave me.
Cornelia

Me:
Thank you.
The Book of Negroes just may be the best book I've ever read. I loved it. Enjoy.

My conversation with Cornelia helped me realize that others might care to hear about the origin of my own unique name. I teased my mom for years about why she named me Deana. (I was pretty sure my dad had nothing to do with the naming process, as his was more the stereotypical male role in the family and my mom had been a teacher and was very creative.) All of my siblings were given names that are easy to spell, write, and say - Karen, Barbara, Alan, Leanne - while I was given 'Deana'. I am the second-oldest, so birth order was no reason that I could see for that switch-up, although I teased Mom that maybe she had been given too many drugs during my birth.

My mom often ignored my pleas for an answer to this question. One time a few years ago, when I asked about my name's origin, she told me, "I was going to call you Myris."
"My what?" I asked.
"M-a-y-r-i-s," she spelled out the word for the dumbfounded me.
"Umm ... Deana's good, Mom. Thanks."

I didn't know if Mom was joking or not. She had a wonderful sense of humour and often made stuff up, encouraging us to do our own research and come to our own conclusions. She died from pancreatic and liver cancer in July 2011, and left me wondering about my name to this day.

I had always thought my name was a compilation of those given to two of my mom's sisters. Put 'Dora' and 'Jeannie' together and you get 'Deana'. That made sense to me. But that was not correct either, I was told.

Another story Mom told me was the most believable of all her explanations. In the 1950s, she listened to a soap opera on the radio. It was called Ma Perkins and one of the many characters was Bernadeana - they called her 'Deana' for short, Mom said. I searched the Internet for hours one day to try to confirm this story. I finally found one mention of a Bernadeana as a Ma Perkins character. I cannot seem to find that reference again, but that was good enough for me to go with this story as the most plausible explanation.

There were 68 different characters over the 27-year run of 'Ma Perkins'. One of those appears to have been Bernadeana - although I'm sure Mom told me that Deana was 'the heroine' and not a bit player.

As a young journalist in the 1980s, I gave up trying to correct people who mispronounced my first name, especially if I was planning on interviewing them for only one feature story. Finally, my husband Al recommended that I need to correct everyone. "If you don't correct them, they will call you Dee-an-na your whole life." He was right, of course, and I have since learned to politely correct people.

Mom once asked me why I was so curious about my first name. "What do people call you?"

"Harumph," was the sound I heard from Mom.

When I married Al Driver in 1976 and changed my last name from the Ukrainian hard-to-pronounce 'Pacholok' (with a silent 'c') to Driver, I thought that would make my name so much easier for others to say correctly.

The first time I was called by my married name, I was introduced as 'Deanna Driven.' Oh, brother.

Posted by Deana Driver at 11:58 AM No comments: