On February 6th, we had the privilege of attending a Regina Pats Western Hockey League game to sit alongside the good folks of Children's Wish Foundation, Saskatchewan branch, on Children's Wish Night.

Author Dave Driver, who also happens to be our son, brought copies of his funny children's book SuperMom and the Big Baby, illustrated by Guy Laird. Dave is a mortgage broker who wrote this funny story as a gift to his wife Kelli. The phrases that SuperMom speaks in the book are phrases that Kelli spoke while sleeping. The book has been praised by teachers, parents, and children ages two to nine in particular.

We offered a special deal to anyone wishing to buy the book that night. Usually, we sell the book for $13.95 and donate $1 from each book to Children's Wish Foundation. (We donate to numerous charities from sales of some of our books. The list is at the bottom of our Home page.) Last night, we sold the book for $10 and gave HALF of that money to Children's Wish as our donation towards their good work.

Here's a photo journal of that night's fun event: 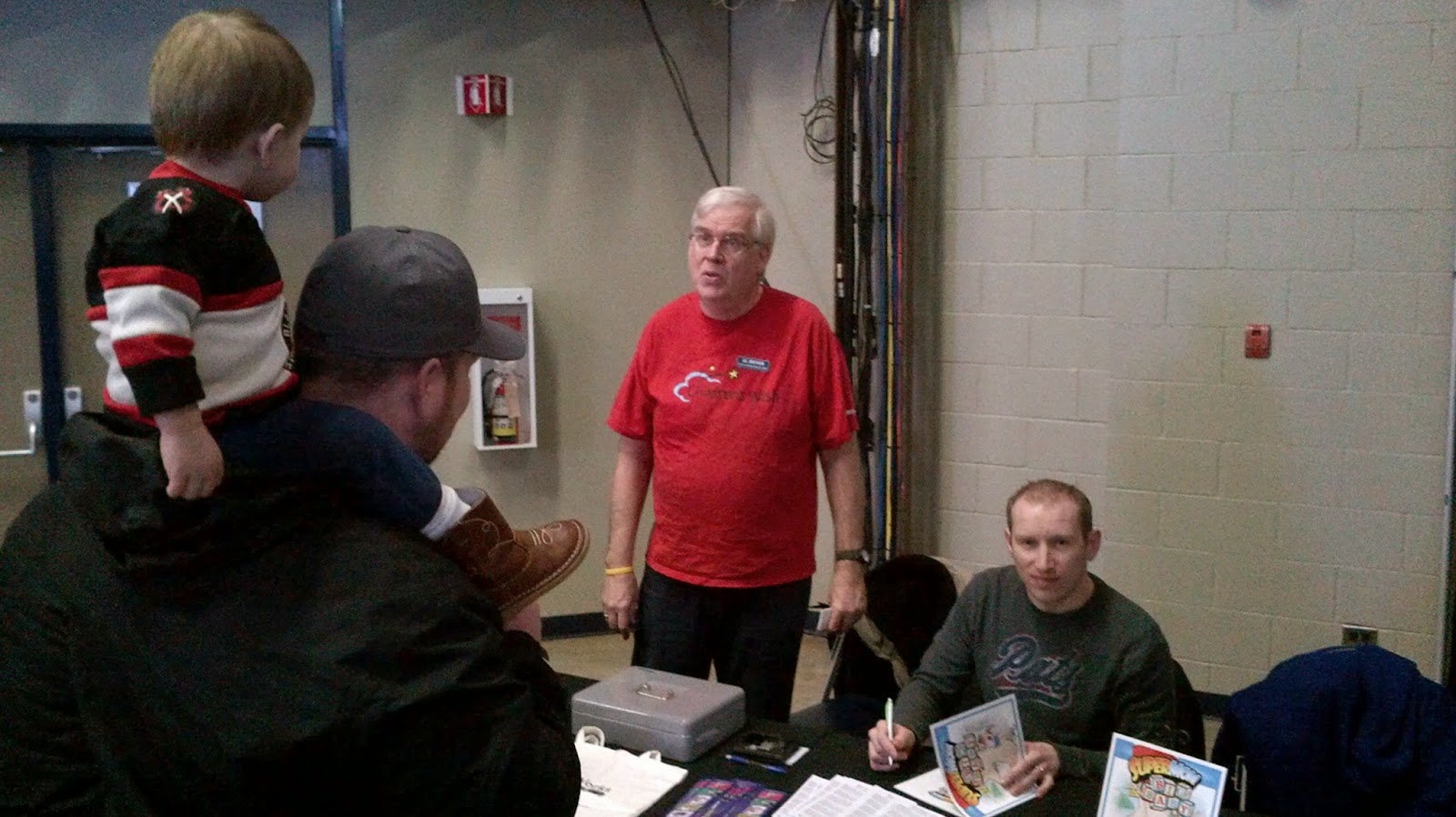 Dave posed for a picture while signing a book for this little guy before the game. Meanwhile, Al is busy visiting with the little dude. His 'grandpa' impulses kick in and he starts the teasing and visiting every time he sees a child. 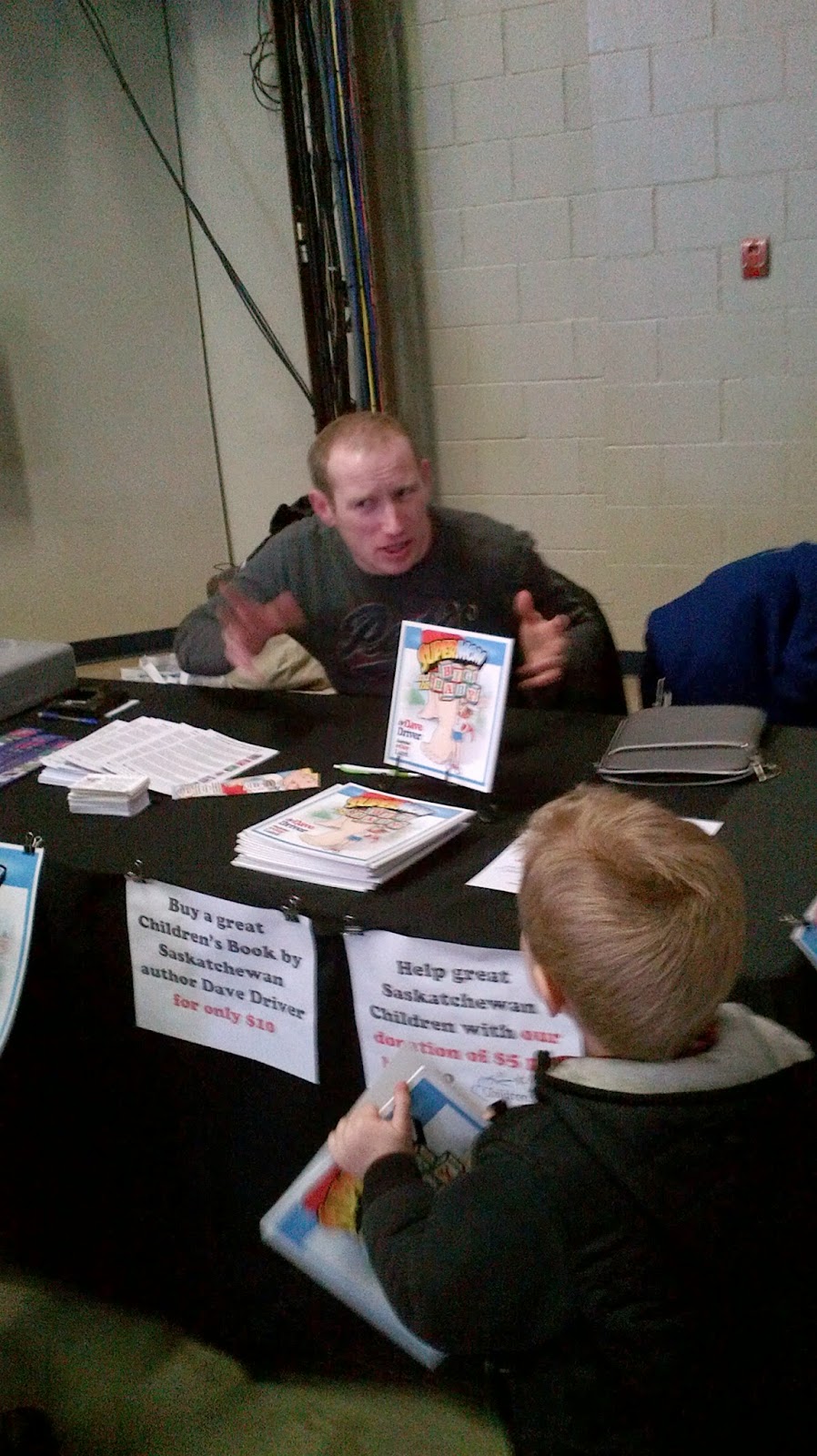 Then it was Dave's turn to visit. 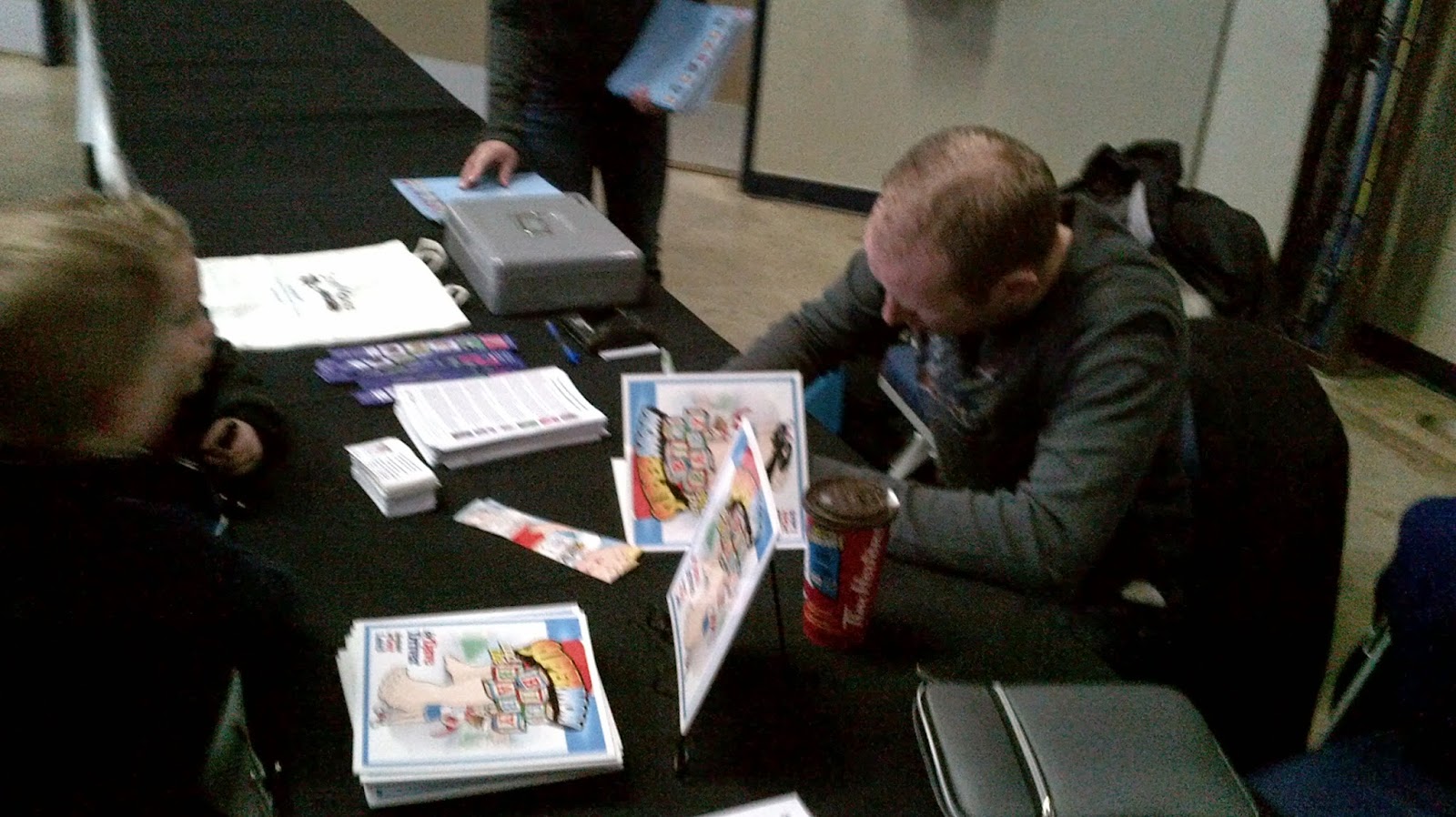 He signed a book for this young man... 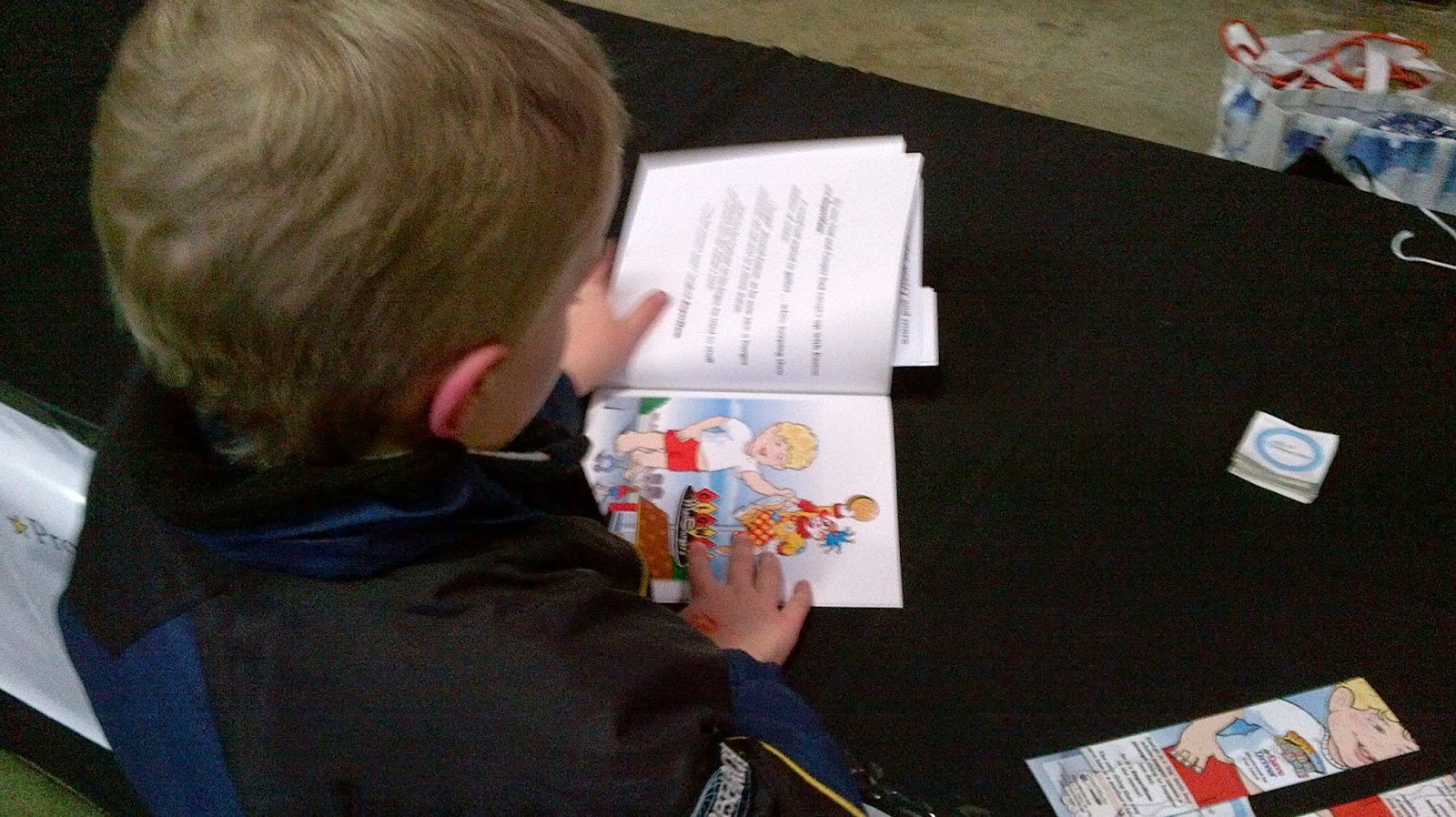 ...who couldn't wait to look at his new book. 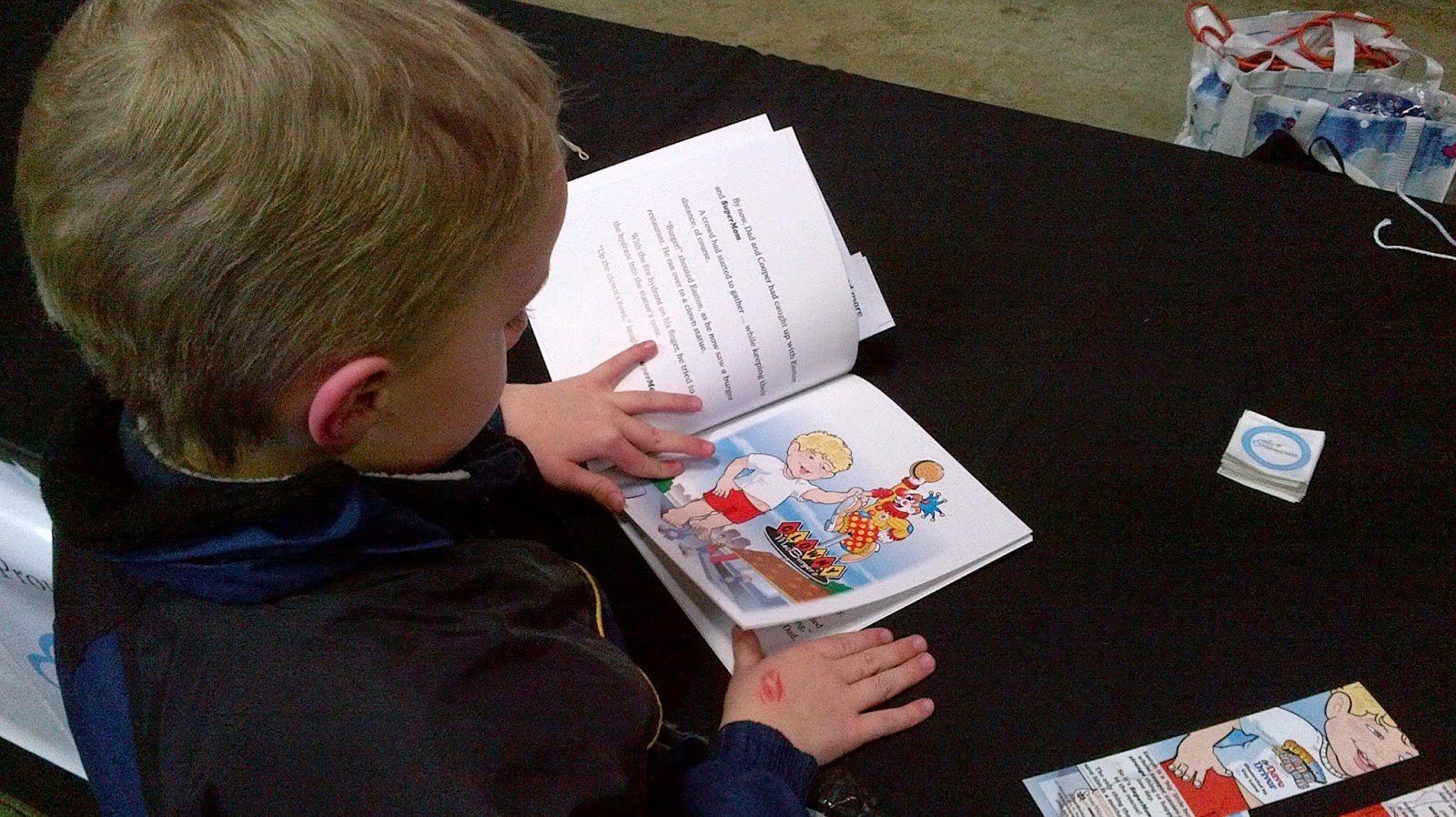 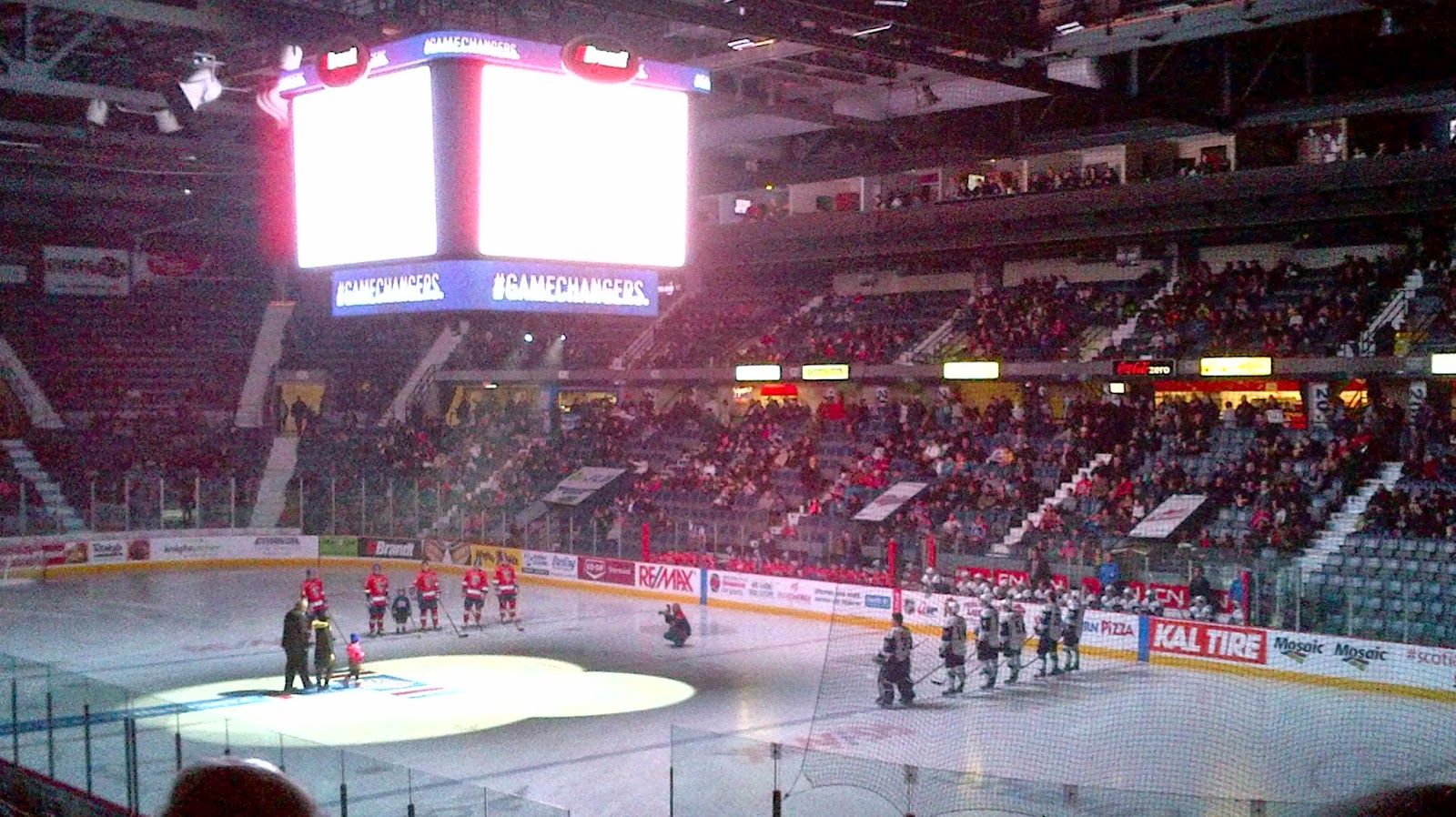 A Children's Wish Child was introduced to drop the puck at the beginning of the hockey game. 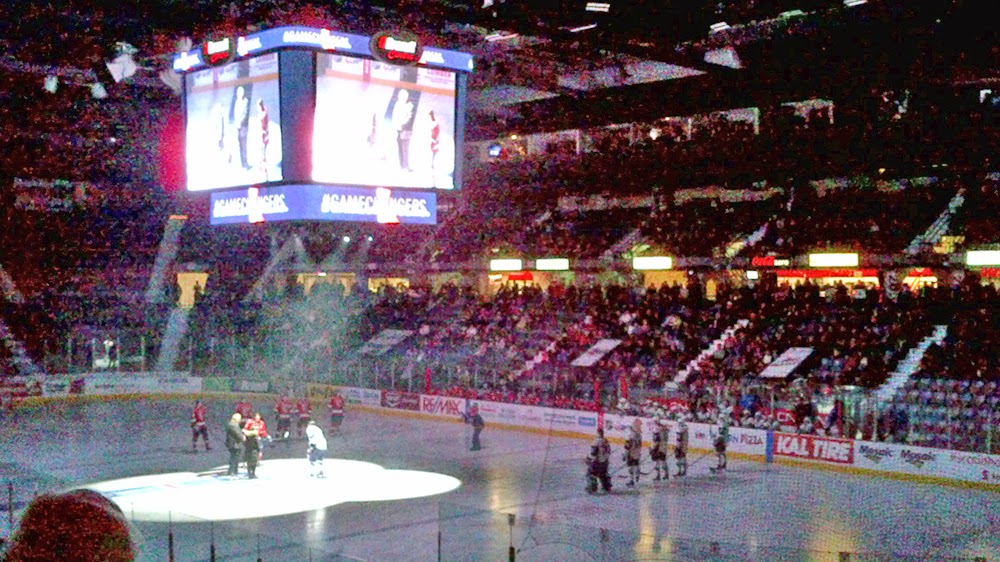 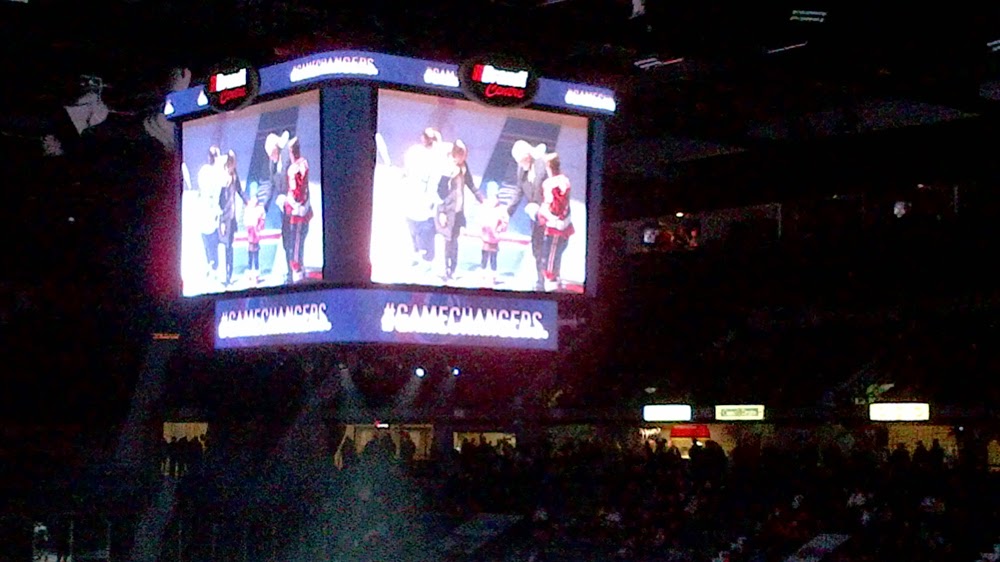 We were impressed by the new $3.7-million scoreboard and screen at Brandt Centre, home of the Regina Pats junior hockey team. Wow! It's like watching TV in high-definition and the clips between plays add so much more entertainment to a night out at the hockey game.
I've never seen a 'Kiss Cam' or those psychedelic 'Clap Your Hands' colours on screen at a Pats game before. 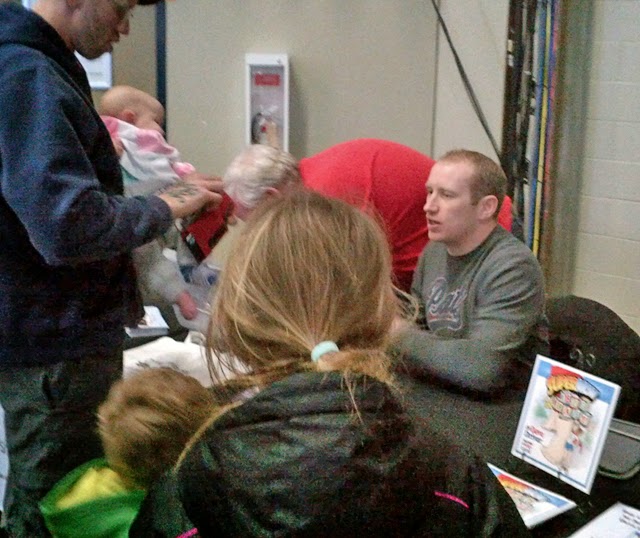 This family stopped by and the dad asked what we were doing at our display. When we told him we were selling our great children's book and giving half the proceeds to Children's Wish Foundation, the little boy (about age six or seven) told us: "I've read that book."
I was a little taken aback and asked him. "You've read this book?"
"Yes," he said.
I looked at his mom and told her that her son said he's read this book. "Oh, maybe he read it at school," she said.
The boy looked at me and announced," It's in my backpack."
"Your backpack at home?" his mom asked.
The boy nodded.
I leaned down to the boy's level and pointed at Dave. I told the boy, "This man wrote this book. Isn't that cool?"
Without missing a beat, the boy replied, "I know. I saw his picture in the book."
Dad asked, "Do you like this book?"
The boy nodded.
"Would you like to buy a book so you can read it to your brother and sisters?"
"Yes."
So they purchased their own copy of the book, and we all smiled. For quite a while. 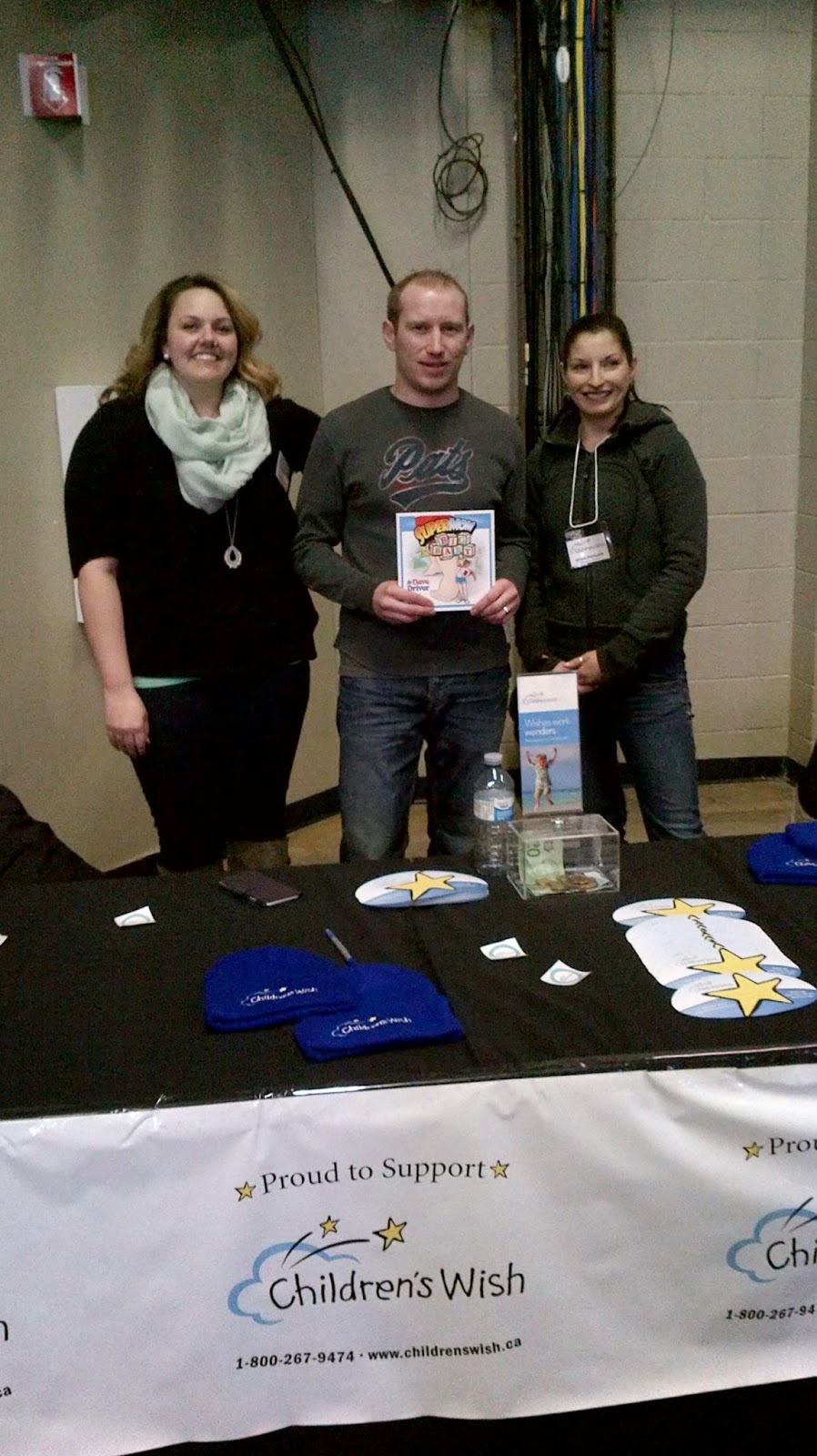 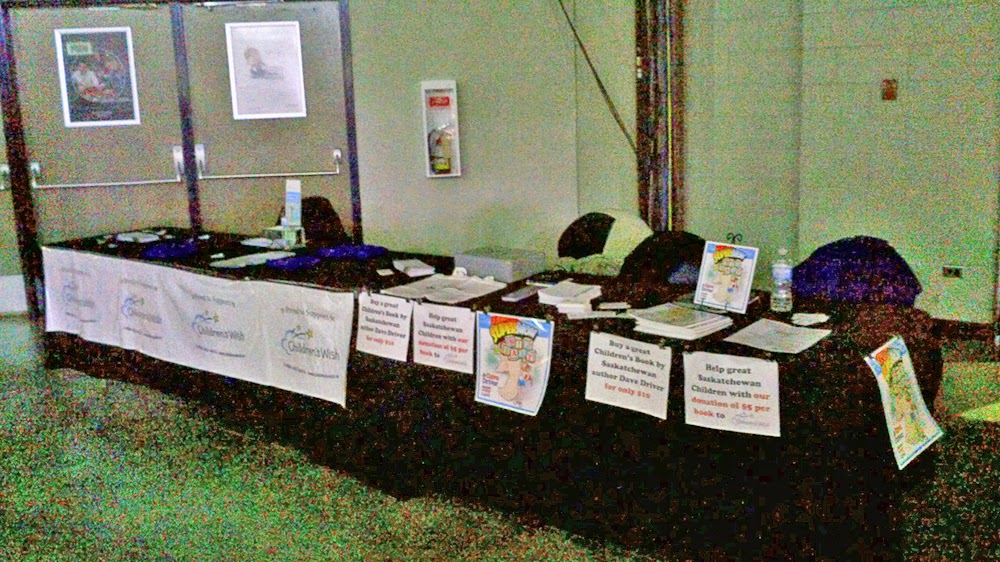 We had fun working alongside them and talking about their great charity. 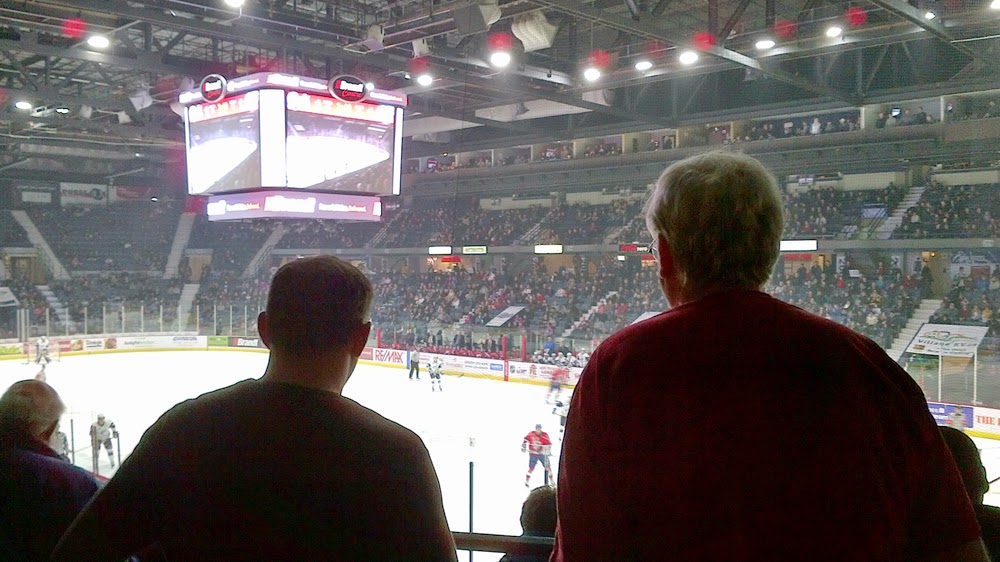 When the overhead lights were down and the game was on, Dave and Al enjoyed watching the Regina Pats and Saskatoon Blades on the ice. 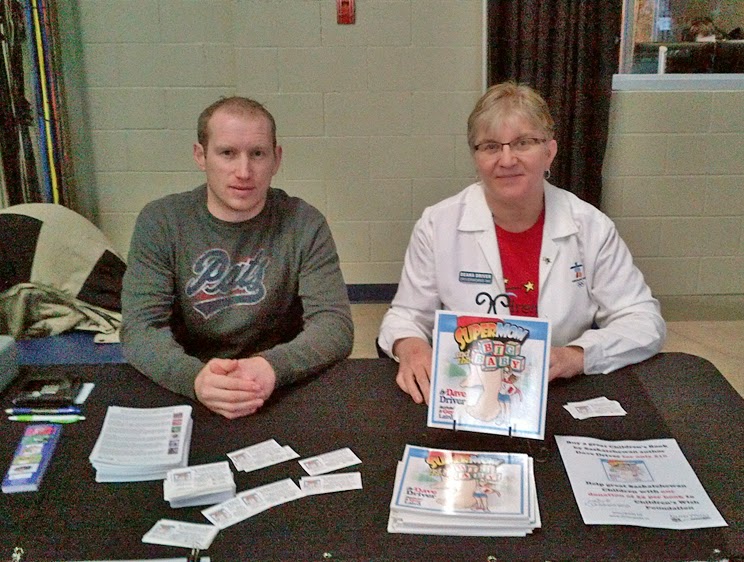 I asked Al to take a photo of me with Dave, to prove I was there. (The photographer is rarely in any photos - with the exception of today's selfies trend.) 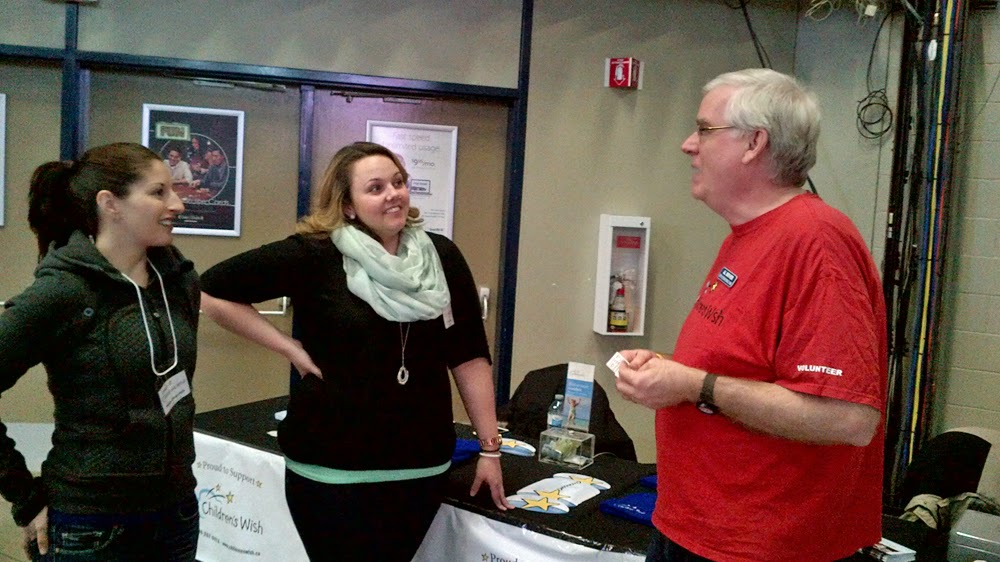 While Al was busy chatting with Jillian and Kristen... 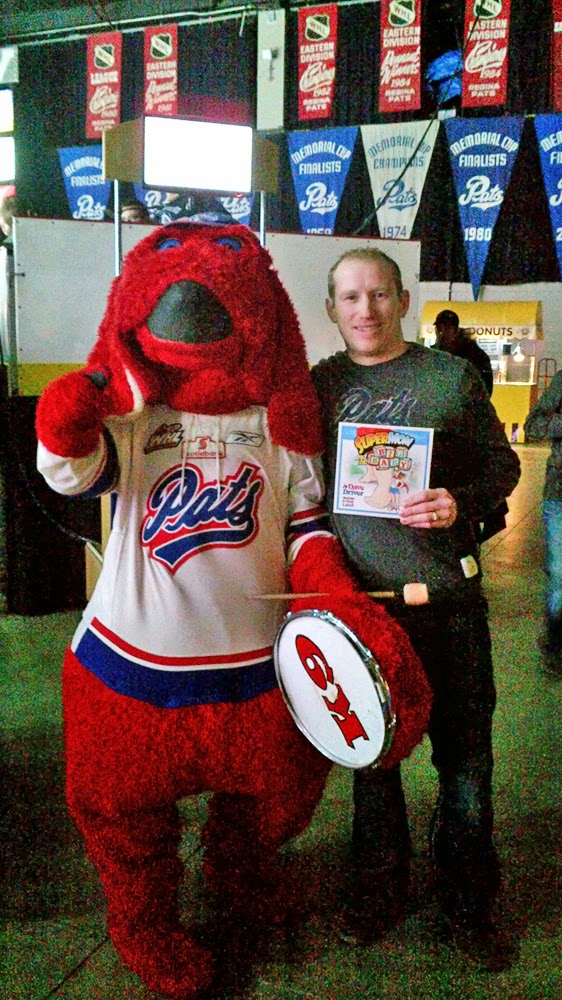 ... Dave was waiting patiently for K9, the Regina Pats mascot, to pose with him and the SuperMom and the Big Baby book.

It was a fun night in Regina, Saskatchewan, made even better when a gentleman came along and made a substantial donation to Children's Wish Foundation. He had a Wish Child several years ago, and they went on a vacation through Children's Wish. His selfless act made our night.

We'll be doing this again next month, on March 17th in Moose Jaw, at 7 p.m. in the new Mosaic Place, when the Moose Jaw Warriors play the Swift Current Broncos. We'll see you there!

A Conversation With My Mother – For World Cancer Day

Yesterday afternoon, I had the urge to phone my mother and talk to her.
Unfortunately, that couldn’t happen physically because my mom died on July 9, 2011, three months after being diagnosed with inoperable pancreatic and liver cancer.
Her death cut me to the core. I thought she’d live for another 10 years, like her mom, who died at age 94.
I didn’t realize how much I would miss my mom until after she died. I suppose that’s normal, but I don't like it. Her death has not stopped me from talking to her, however. I have conversations with her all the time – in my mind, on some higher level than I ever experienced prior to her death. She is a deep part of who I am, so it makes sense that she will always be with me in one way or another.
Today is World Cancer Day.
In honour of all those who are fighting this terrible disease, and those who have lost their fight or lost others to cancer, I am taking a giant step outside my comfort zone and sharing with you my most recent conversation with my mom.
This is what we talked about yesterday:

Hi, Mom. How are you doing?
Great. Really great.
I miss you.
I know you do, but it’s okay. Things are beautiful here and you are doing fine. You’re a good writer and a good person. Live your life and help others. That’s what it’s all about.
Thanks, Mom. What do you want me to do?
Tell them there is life after death. Tell them there is hope. Tell them Dionne’s story – over and over again. She helped me. She helped you cope with my death. Tell them all. Hope is important.
I’m trying, Mom. The journalist in me doesn’t often let the marketing/public relations person take over.
That’s okay. Be you. You are perfect.

Thanks, Mom. You always did know how to keep me grounded. Hey, wait a minute. That ‘you are perfect’ part doesn’t sound like the real you. You’re the one who told Auntie Janet not to read one of the books I published because she wouldn’t like it. While I was standing right there!
(A smile.) Well, it’s true. She wouldn’t have liked it. So there.
Ah, I can see your one eyebrow lifting right now. And your smile. I love that smile. More of a smirk, I guess. Thanks for that, by the way. It keeps people around me smiling a lot. Okay, Mom, I’ve cried enough tears for now. I’ll talk to you later. Have a good day.
I will. I always do.
I love you.
I love you, too. Be strong.

So now I guess I have to follow my mom’s advice and tell you about Dionne Warner. She’s amazing. She’s battling her eighth cancer diagnosis right now, with grace and courage and tons of humour. She was fighting her fifth, sixth, and seventh cancer diagnoses when I met her in 2010 and began writing a book about her and her husband Graham.
The book’s called Never Leave Your Wingman: Dionne and Graham Warner’s Story of Hope, and it’s as much a love story as anything. It’s helped a lot of people, including me (we’ve sold more than 6,000 copies so far). It’s about living life to the fullest, every day, whether you’re sick or not. 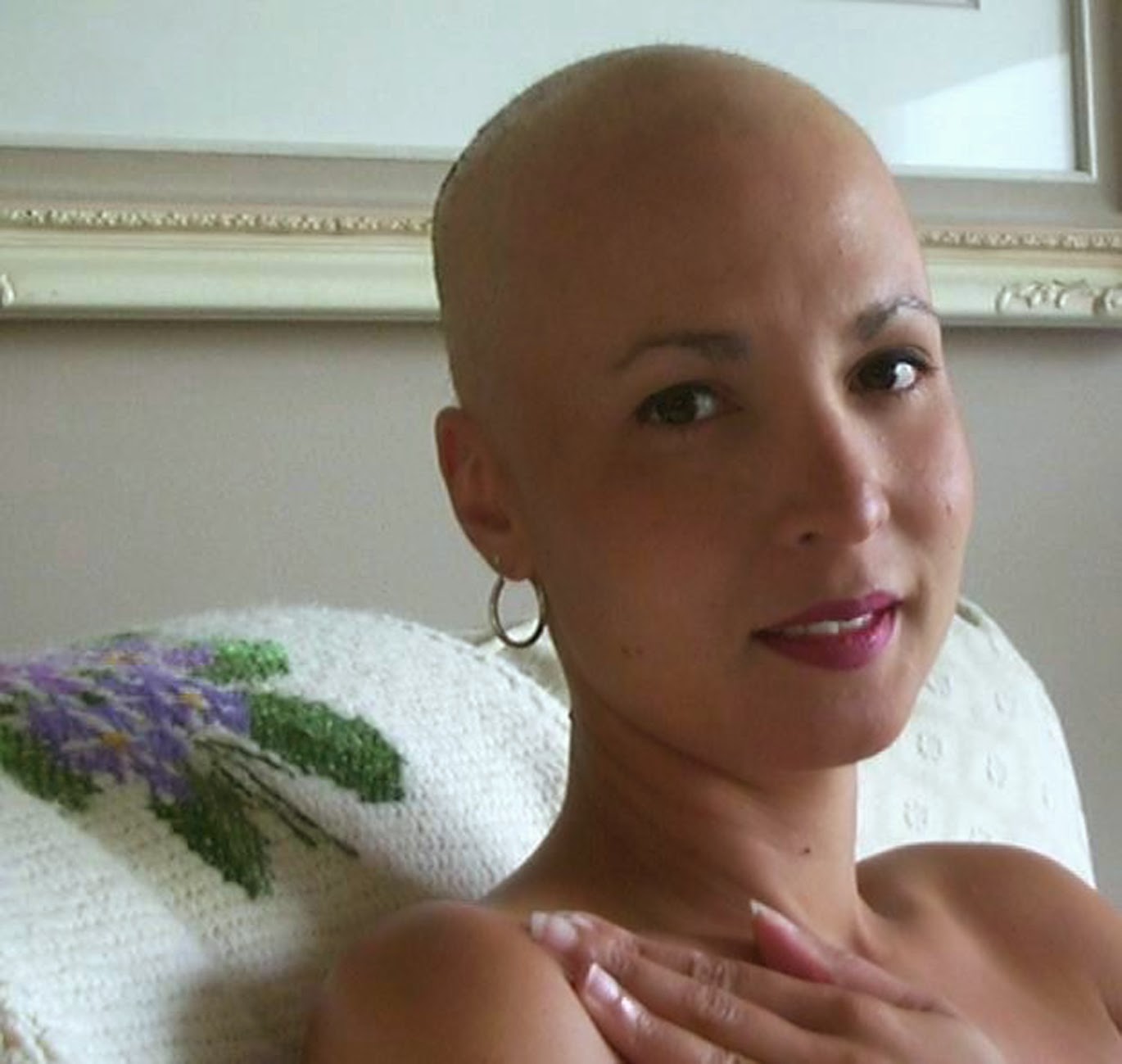 In April 2011, I had two chapters left to write of the book when we got the phone call that Mom had inoperable cancer. I worked on my laptop as we drove to Edmonton, Alberta to visit Mom that Easter weekend, and I looked at photos of Dionne and Graham Warner, dressed in costume and dancing into her chemo treatments in Regina, Saskatchewan. I shared those photos with my mom and my siblings and other family members in that hospital room. The photos made us laugh, gave us some information about cancer treatments, and took a lot of the fear out of cancer for us. We had never faced the disease that up-close-and-personal before.
A few weeks later, Mom phoned me from her home and asked, “Did that Dionne girl ever try
anything green?” 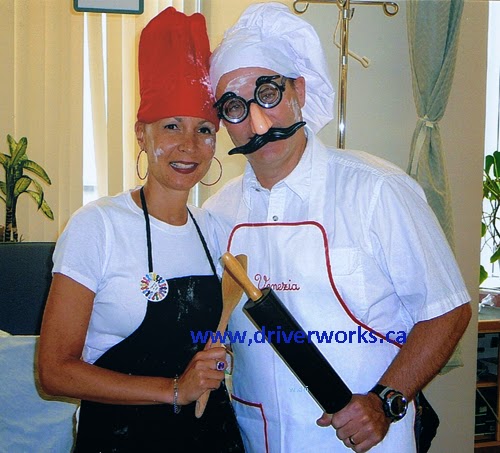 It took me a few minutes to figure out what Mom was asking, but I realized she meant alternative, complementary therapies aside from chemotherapy or radiation. “Yes, Mom. Dionne sees a doctor of natural medicine, which is different from a naturopath or a homeopath, and she takes supplements to help her fight the toxicity of her cancer treatments. She’s also been to Mexico twice for complementary therapies.”

A few weeks later, I found out that Mom was trying some homeopathic therapies. One of my aunts said the possibility of alternative treatments gave my mom some hope and put a smile back on her face and a new spring in her step. Mom started to bounce back mentally and be the same strong woman I’d grown up with.
Mom took that therapy until the day before she died. My youngest sister cared for her in that final week and when we arrived for our final visit with Mom, my tired, frail mom insisted on pulling herself out of bed and walking out to the living room to sit in her recliner. We knew it was draining every ounce of strength she had, but she was determined to make this final visit seem as normal as possible. It was heartbreaking and beautifully strong.
That’s my mom ... tough to the end. And that’s the spirit she wants all of us to live with.
Be strong. Fight to the end. Be good to each other. Help others. It’s what my mom did for all of her 84 years. It’s what Dionne Warner does in her ongoing cancer battles.
Cancer Sucks. But we don’t have to take it lying down.
Let’s Fight! 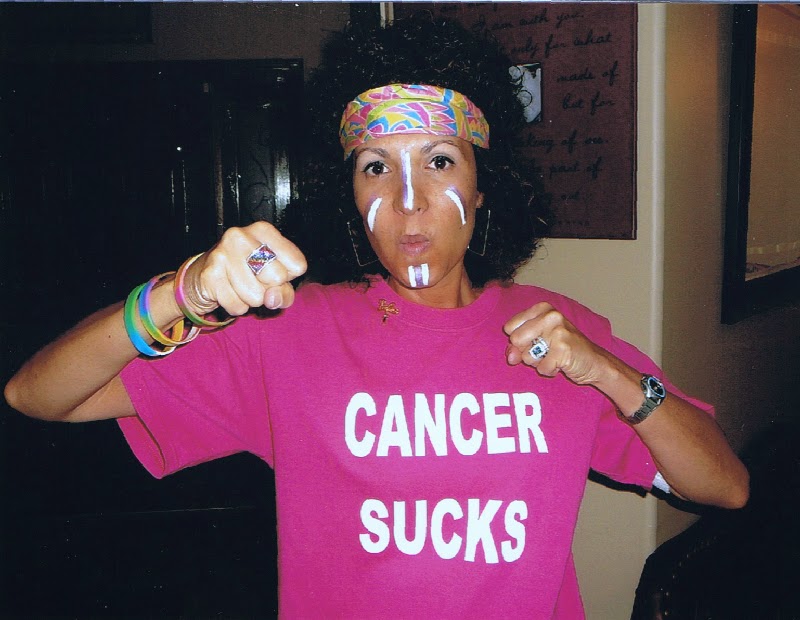 Posted by Deana Driver at 2:47 PM No comments: