Our 40th Wedding Anniversary - From A Hospice Bed

Today is our 40th wedding anniversary. Strangely, we are celebrating that today for the first time in 40 years.

We've never celebrated on December 29th before, but this year is different. This year, my husband is dying from cancer and it is important that we take every moment possible to celebrate whatever we can in whatever time we have left together. Even though he is lying in a hospice bed, getting weaker every day, we celebrate that we've been married – happily – for 40 years. That is a big accomplishment these days and we’re proud of ourselves.

Al and I met in college in Calgary, Alberta in the fall of 1973 and we became best friends before we began dating in January 1974. Al went home to Regina, Saskatchewan to work at the Regina Leader-Post newspaper for the summer of ’74 and I stayed in Calgary to work at summer jobs. Those were excruciatingly lonely months without him, but he phoned me often, in the middle of the night, using the Regina Leader-Post's long-distance phone plan. (Thank you, former sports editor Bob Hughes for being so kind as to allow these calls between two lovesick youngsters.)

The first thing Al said to me when he returned to Calgary in August 1974, for our second year of journalism school, was, "Will you marry me?"

I eagerly said, “Yes.” I couldn’t imagine a life without him.

We didn't officially get engaged until the following spring, at the top of the Calgary Tower, a few days before our two-year journalism course ended. Al had a job waiting for him in Regina and I only had him, so we agreed that I would move to Saskatchewan. It was an excellent decision on my part.

Our first wedding was a legal ceremony performed by a justice of the peace at the Regina Court House on December 29, 1975. We did it for the money.

One of Al's dad's friends informed us that if we got married before the end of the calendar year, Canadian income tax rules (in those days) would allow Al to claim me as a dependant for the entire year. This meant a significant tax benefit for a young couple who had nothing.

I was working as an invoice typist for a company that sold paper. I lied to my boss and said I had a doctor’s appointment that morning. (I had to lie - I needed them to still give me time off for our "real" wedding a few weeks later.) I left work at 11 a.m. to meet Al, his parents, his sister Linda, and one of our male friends, Terry, at the Regina court house. I didn't have any friends in Regina yet and Al's sister was still underage, so Al's mom signed the marriage documents as my witness. Our friend Terry signed for Al. (Strangely, Terry was an usher at our church wedding and not one of our best men. Our best men were likely both working that day and we must have decided not to bother them with this trivial event since Terry was available during time off from his job.)

The marriage ceremony lasted less than 15 minutes. Al took my wedding ring out of a box and put it on my finger at the appropriate time, as I did with his; we signed the papers; put the rings back in the boxes; took a couple photos; then went for lunch at a nearby pizza restaurant. I couldn't even eat much lunch because it took a long time coming and I would have been too late going back to work.

Al continued to live at his parents' house while I lived in an apartment that became our first home as husband and wife after our "real" wedding weeks later.

On January 17, 1976, we had our church wedding in my hometown of Athabasca, Alberta. We made our vows in front of God, our families, friends, and many people we didn’t even know who were invited by my parents. That’s what good Ukrainian weddings were like in the 1970s.

We have always considered January 17th to be our wedding anniversary. December 29th was quickly forgotten.

It’s unlikely that my beloved Al will be alive on our January 17th, 40th wedding anniversary. His colon cancer has spread to his bowels and he has been unable to eat for most of the last few weeks. It is sad, maddening, distressing, and heartbreaking to watch, but we have had many precious moments these past 12 days since we heard the news of the failed surgery attempt to remove his bowel blockage.

We have said all that we need to say to each other. I have read him dozens of tributes about him written by family, friends, co-workers, school chums, and more. We have seen many wonderful glimpses of his life and his impact on others through their eyes, and it has been good. Very good.

Al is strong mentally, when the painkillers wear off a bit, and he has surprised us many times over these past few days: waking to watch the world junior hockey games (hockey is his favourite sport); asking us to bring him an Orange Crush and then absolutely savouring the taste of it; providing a suggestion on how to further streamline our accounting processes for our book publishing business; telling our children, children-in-law and grandchildren that he loves them; and, as usual, correcting my verbal errors when I say the wrong name as I tell a story, and, I am sure, mentally rolling his eyes when I say dumb things. He has opened his eyes and wished me “Happy Anniversary” twice today, including after I read him what I intended to post on this blog. He is a good man.

And we have laughed. A lot.

Al has been at peace with the notion that he is dying. Everyone dies. It is apparently his time.

He wanted to make it to Christmas, which he did.

He wanted to make it to our anniversary, which he did.

He has lived a good life and, as he told me a few months ago before we knew how mean this cancer would become, “We’ve had a good run.”


Yes, we have, my love. Forty great years. Happy Anniversary. 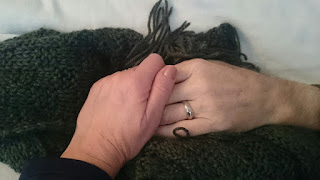 About Cancer, Hope, and Love

Hello, dear friends and supporters of our family and DriverWorks Ink publishing.

I am sorry to say I have some sad news to share with you.

My beloved husband and publishing partner, Al Driver, went into surgery around 9 p.m. on Thursday, December 17th. The purpose of the surgery was to get rid of the blockage in his bowel that has been causing him pain and preventing him from eating since he went to the hospital on Monday, December 7th. Around midnight on Thursday, he went into the recovery room after the surgery.

On Friday, December 18th, the surgeon (who also did Al's first surgery on August 20th and found the Stage IV colon cancer with a spot on his liver) told us that this bowel blockage was caused by multiple tiny tumours that have adhered to Al's bowel and are too small to show up on a CT scan. She could not remove the tumours because they are too attached to Al's bowel and she would have to cut the tumour or his bowel, which are not good options.

The tumours are on the site where the cancer was removed in August. There are also tumours on the lining of his abdomen. There was nothing the surgeon could do from a surgical perspective so, after three hours of exploring and trying to come up with a way to solve the problem, she closed Al up again because nothing more could be done.

The surgeon then spoke to Al's oncologist, and the oncologist said that neither chemotherapy nor radiation therapy are options. So there is nothing more that can be done. Al described it as “our last hope was severed.” Blunt but true.

Since Friday afternoon, our family has been reeling from this news but we are quickly gathering our strength (remembering Dionne Warner's 24-hour rule) to make Al’s last days on this earth as comfortable as possible. He has moved from surgery and oncology into palliative care, which focuses more on the comfort of the patient and quality of life rather than healing and curing.

He is in discomfort physically at times and last night, we were told he only has days left on this earth.

Our hearts are breaking, but we know he will always be with us. God just needs another angel to spread love and hope in the world. Our Al will do that in his fine, deeply compassionate, humour-filled fashion.

Mentally, he is at peace with the situation. Unfortunately, he has had a lot of time to think about this possibility during these past four months of illness. He is hoping to be strong enough to be released from the hospital in the next few days so he is able to spend Christmas at home with our family. We will do everything we can to help him fulfill that goal and any others he has set. He is a strong, brave, wonderful man. We will cherish the moments we have left with him.

It occurred to me this past weekend that Al and I are "story people" so, without Al's knowledge but with the blessing of our children, I invited people to share a favourite story or memory they have of Al and/or what he has meant to them ... so that Al can enjoy these special memories and sentiments while he is alive.

I called this a “submission request,” just as we have done with some of our anthologies. Ha ha! We plan to later compile these memories for our children, grandchildren, and family members yet to come. Everyone is welcome to share a story about Al. You can send your "Submission About Al" to me via the email address on our web page. Thank you in advance.

As has been our desire all along, you are welcome to share this information about Al's health with others so they too can keep Al and our family and friends in their prayers.

We cherish all of you who have supported us, our family, and our publishing business. Thank you.

My Al is a flawed human being, just like the rest of us, but his human frailties are far outweighed by the good he has done and the wisdom, love, caring, and compassion he has extended to others - especially me. That's what has come across loud and clear by all who have responded with a submission so far. It has been very special to read these stories and tributes to Al, enabling him to once more inject his quick wit and to verbally edit the remarks to make the facts fit the situation - as he remembers it! These memories have brought many smiles to him and us, and we have laughed and laughed and laughed these past two days!

Despite these being among the darkest days of our lives, we wish you and your family a happy holiday season.

We plan to enjoy these next few hours, days or whatever time we have with Al. Cancer may take his life,  but there is so much that it cannot do.


In love and peace,
Deana and family