March 24th is World TB Day - the day to raise public awareness about tuberculosis and the fact this disease is still a threat in many countries of the world. According to the World Health Organization, tuberculosis (TB) is one of the world's top infectious killers.

The theme for World TB Day 2015 is 'Reach, Treat, Cure Everyone', to draw attention to the estimated 3 million people worldwide with TB who are not treated and cured. The Lung Association of Canada notes that in Canada, we have many world-class researchers working to find ways to treat and cure this disease. I am thankful for that.

In our immediate family, we have been affected by numerous health conditions affecting the lungs, including a TB scare faced by my mother-in-law, who was a nurse for all of her work life. My husband, Al, was hospitalized many times during his first few years of life because of severe asthma. As a child, he was so ill that he asked his mother if he could go back underneath the oxygen tent in his hospital room - so he could breathe better. I developed allergies and asthma as an adult - which are still a struggle for me - and both of our daughters have had difficulties with asthma over the years.

The scariest times were those which took any of us to the hospital. Being unable to breathe properly is frightening, and we would not wish that on anyone.

Last October, our eldest daughter, Lisa Driver, posted a message on her Facebook page in which she shared a music video that has a truly inspiring story attached to it. This is what Lisa posted:

I was going to share this song anyways, because I love its message of living each day to the fullest.
Then I watched the video and was truly touched by the dedication of the song to those with Cystic Fibrosis. When I was three, I had such severe asthma the doctors were worried it was CF. I haven't thought of that a lot and until this moment, didn't realize how close I came to a terminal diagnosis. I am so grateful for my health and this life.
This video is worth the watch. Lisa


Al took our little Lisa to the hospital that day when she was struggling to breathe. He vividly recalls that moment when the doctor said that Lisa might have cystic fibrosis. It still shakes him to the core. We are so thankful that CF did not become a reality for her.

For months now, we have been working on producing a book called 'Cream Money - Stories of Prairie People', which will feature short stories told by people in Saskatchewan, Manitoba and Alberta, who grew up during a time when farmers collected and sold cream to subsidize their family's income. I am one of those Prairie people from that era. Part of my family's story will be in this book, which we plan to release in the next few months.

Our publishing company, DriverWorks Ink, has donated to various charities for years, from the proceeds of many of our books. Last fall, we were been mulling over the idea of whether to donate from Cream Money or not. Publishing is a tough business in which "every penny counts," as an industry person recently advised us at a Saskatchewan Publishers Group /SaskBooks conference. Still, we are Christian people and we give in gratitude for the gifts we have received. So money is nice, but sharing it is nicer.

After seeing Lisa's post and that incredible video last fall, we decided that we would give an annual donation from our Cream Money book sales to The Lung Association of Saskatchewan.

We look forward to releasing our Cream Money book in the next while (in which the cream can image below will play a central role), and to helping further raise awareness about lung diseases and find cures and treatments for diseases like TB, asthma, and many more. 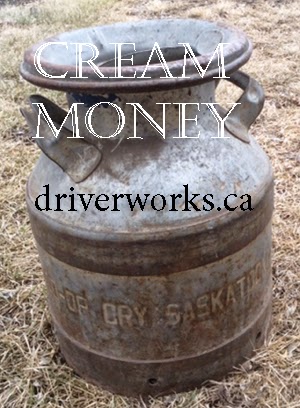 We are in the final stages of editing the 30-plus stories that have been contributed to our Cream Money book. If you or someone you know still has a story to share about those days on the farm, please contact me by March 31 so we can make room for your submission.

Posted by Deana Driver at 3:11 PM No comments:

You Deserve The Best - The Perks of Being a Wallflower

I watched the movie The Perks of Being a Wallflower the other night. It had been on my 'movies to watch' list for quite some time, and the fact that one of the executive producers is a family friend was another reason I wanted to watch this film.

James/Jim Powers, who produced the movie with the film's writer Stephen Chbosky, is the oldest son of Ken and MaryBelle Powers, who have been dear friends of ours for many years. Ken is a retired United Church minister and he was the first full-time minister of Heritage United Church, the church I attend in Regina, Saskatchewan, Canada. I give Ken the credit (and sometimes the blame) for pushing me out of my comfort zone and helping me further discover my abilities as a writer, but mostly he pushed me into having the courage to stand in front of a crowd and read scripture. This was the first step on the long road leading to me becoming the confident public speaker I am today. It's easier to stand up and speak in public when you are surrounded by loving, supportive people.

But back to the movie. I loved it. The movie is described as a story about an introvert freshman who is taken under the wings of two seniors who welcome him to the real world. Without saying too much about the plot, the script was well-written, thought-provoking, and surprising. The characters were strong, sound, and complex. The acting was superb. The main characters played by Logan Lerman, Emma Watson, and Ezra Miller stayed with me long after the movie was over and I found myself reliving parts of the movie and pondering many of the lessons within.

There were two phrases (of many quotes from the movie available here) that have stuck with me. They are so strong in my consciousness that they inspired me to write this blog and put the quotes together with photos I have taken. 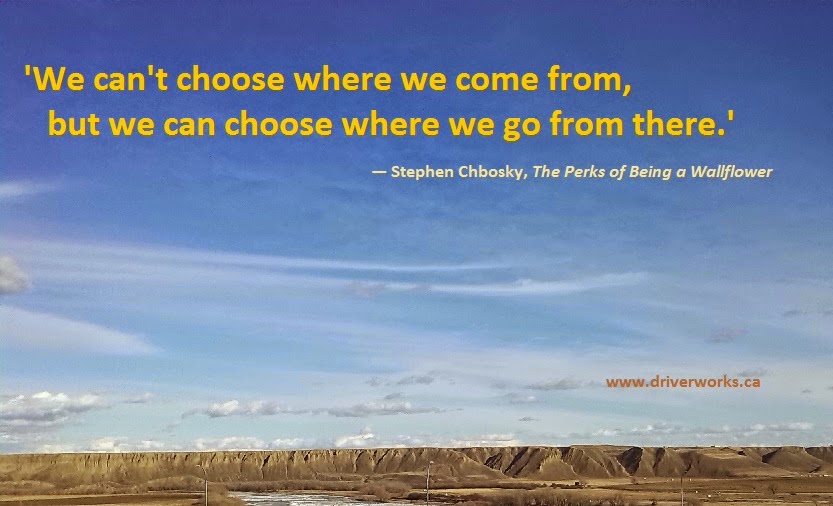 As a journalist and as a human being, I have seen so many cases of the past inappropriately defining the future for some people. I hope for a world where the past only helps and doesn't hurt us.

This second phrase was used twice in the movie and it made its point with me both times, as I watched the actors, and as I thought of people I have met and whom I have read about who somehow do not believe themselves worthy. 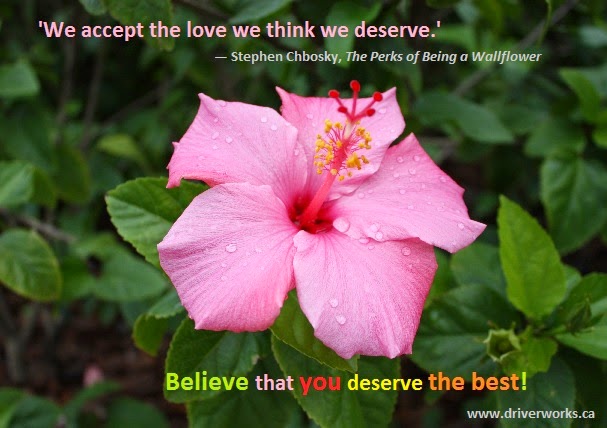 Posted by Deana Driver at 3:57 PM No comments: