Living with Cancer and Gratitude

It has been more than two months since I last posted on this blog. August 13th to be exact. The reason for that is very simple. And completely overwhelming.

On August 20, my husband/soulmate/publishing partner, Al Driver, was admitted to hospital with a severe abdominal pain that turned out to be Stage IV colon cancer which had spread to a spot on his liver and was in 16 of the 38 lymph nodes the surgeon removed as part of the emergency surgery she performed that night. Al now has an ileostomy, and the last couple months have been spent in and out of the hospital as we figure out the right "recipe" of medications to keep him hydrated and strong so he can fight his cancer with chemotherapy, which starts next week and will continue for four to six months.

Al is following the inspiring role modeling of our friend, eight-time cancer survivor Dionne Warner, whose story I told in our award-winning, bestselling book Never Leave Your Wingman: Dionne and Graham Warner's Story of Hope. Dionne is an amazing woman who recently celebrated her 50th birthday – 20 years after receiving her first cancer diagnosis! When faced with each of her eight cancer diagnoses, Dionne Warner gives herself 24 hours to say “Why me?” and then she turns it around to “Why not me and what am I going to do about it?” Al immediately adopted that attitude and he is ready to fight, going into his first chemotherapy treatment next week. The latest CT scan shows two small spots on his bowel and one on his liver. His oncologist is hopeful, telling us that if chemo doesn’t take care of them, she will ask a surgeon to take the spots out. We share her optimism and we are thankful to family and friends, and many of our authors and readers who have supported us along the way so far.

We cancelled many of our craft and trade show booths this fall to be together at this time. Much of this information has been posted on our DriverWorks Ink Facebook page. That is where I will occasionally post updates as we walk this path, following Dionne Warner’s optimistic, hope-filled outlook. We have a long road ahead and we thank you all for staying with us and supporting us on this journey.

So it's not likely that I will be posting much on this blog for the next while. It has been a challenge for me to keep up with juggling work commitments and the appointments and other details in our changing personal lives.

Still, we have accomplished a fair bit in this past couple of months and I would like to share some of this excitement with you. 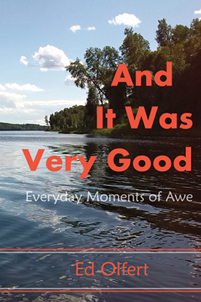 We released one new book - And It Was Very Good: Everyday Moments of Awe by Ed Olfert - in October. Ed Olfert has been a farmer, trucker, welder, and Mennonite pastor. He believes that glimpses of God surround us every day in every moment, and he has written about some of these glimpses, which require a new way of looking that leaves space for awe and mystery. Ed’s short stories – his own uplifting version of “Chicken Soup for the Soul” – have been published in the Prince Albert Daily Herald and are about neighbours and friends, and lives that we might not naturally connect to God, to awe and mystery. Ed's stories will make you think, make you wonder, and make you appreciate the people and the places around you. 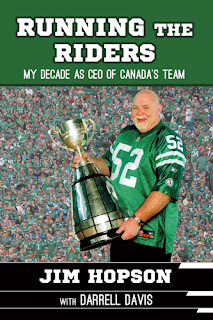 We also have another new book coming out in November. Running the Riders: My Decade as CEO of Canada's Team is written by Jim Hopson with Darrell Davis. In 2004, Jim Hopson was hopeful that the board of directors of the Saskatchewan Roughriders Football Club in the Canadian Football League would hire him as the team's first full-time president and CEO. He believed that the team, with its incredible fan base, could become a successful business that consistently posted strong annual profits while playing in and winning multiple Grey Cups. And it happened. After a decade under Hopson’s leadership (2005 to 2015), the Roughriders became the CFL's strongest franchise, appearing in four Grey Cup games (winning twice) and selling more team merchandise than the other eight CFL franchises combined. They obliterated their debt and posted a record-setting profit of $10.4 million after winning a hometown Grey Cup in 2013, which has been described as the biggest moment in the 105-year-old team’s history. Hopson’s book, with the assistance of Darrell Davis (an author and long-time sports writer and Roughriders beat writer at the Regina Leader-Post), describes Hopson’s business plans, the resistance to change within the organization, the interplay with the fans of Rider Nation, difficult decisions made, and the euphoria of winning two league championships.
An emotional man with a firm disposition, Jim Hopson describes the highs and lows that went along with the job and the path he took, professionally and personally, to the biggest office with the franchise known as "Canada’s Team."

We participated in a few trade and craft shows in October and I was again pleased by the number of people who purchased our new books, including our new nonfiction book of short stories (Cream Money: Stories of Prairie People, compiled and edited by Deana J. Driver) plus our two new fiction books (Pure Baseball: The Carl Jaxsom Legend by Ryan Thaddeus and Catherine of Cannington Manor by Shirley Harris) and our adult coloring book (The Zenimaginarium Garden: A Coloring Book by Saskatchewan artist Jeanne Burbage). This coloring book - the first one published in Canada by a Canadian artist - is so popular that we've already reprinted it and it is being featured in the online Holiday Gift Guide by Canadian Living magazine this fall!

Please continue to enjoy the work of our many Saskatchewan and Prairie authors. I will be working on some new manuscripts of some other authors as time permits. Please keep us in your thoughts and prayers.

I'll return to this blog as time and energy permit.

Posted by Deana Driver at 8:28 AM No comments: