Yesterday was a hot, but productive and fun day for me at the Moose Jaw Air Show. This was the first CFB Moose Jaw air show since 2005. The weather co-operated with a temperature of 26 Celsius, an occasional breeze, and no rain.

My late husband and I and our young children used to attend shows years ago with Al's dad, who loved everything connected with airplanes. (He was one of the first people in Regina, Saskatchewan to fly radio-controlled model planes. The excitement on his face and his vast knowledge of planes added tremendously to the experience.)

I attended yesterday's show with my son Dave, daughter-in-law Kelli, and their three young sons - who were part intrigued, part excited, part bored, but mostly hot during the five-hour show. (That's a long time for anyone to be in the scorching heat, even with loads of sunscreen and short breaks in the shade of umbrellas or displays.) 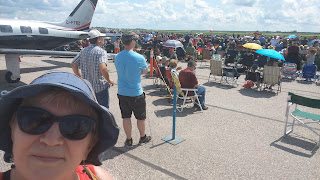 Air Show organizers had expected a crowd of 10,000 but had to turn people away after they reached 25,000 guests! I'd call that a huge success. 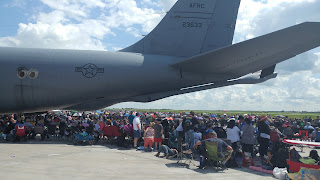 Some of those in attendance had obviously done this before. They found shelter from the sun under the wings of some of the aircraft on display. (Note to self: Do this next time.)

I was anxious to attend this year's show for three reasons - because of the memories attached to my husband and father-in-law, because I enjoyed the shows so much in the past, and because I was hoping to connect with people who could help me with my next book.

I'm co-writing (with contributors) a series of books called Flight: Stories of Canadian Aviation. The first book in the series will be released this fall. I spent more than an hour walking around the displays and tarmac area, talking with pilots and other interesting folks. I handed out the postcard below and asked them to consider submitting aviation short stories for the series or contacting me so I could interview them and write their stories. (You are welcome to share the information and your own story. You can also pre-order Volume 1 on my website.) 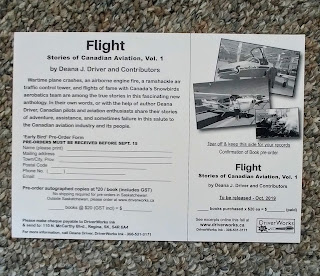 My young grandsons had not seen me working before. They were excited to hear that I had success in finding some potential stories. The 11-year-old was especially curious about who I'd spoken to (rescue crew, helicopter pilots, air museum and history buffs, flight school folks, emergency crew). He shared in my excitement about these new potential leads and also asked me what I knew about the planes flying overhead - not much, but I shared whatever details I remembered of some of the acts I'd seen and enjoyed before.


The fighter jets make the most noise, of course. They capture everyone's attention every time.


The RCAF Snowbirds aerobatic demonstration team's performance has always been my favourite. The plane below was on display during the show. 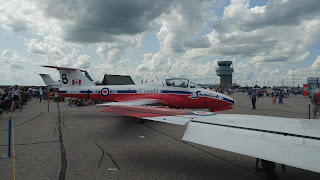 Near the end of the show, as we headed back to the vehicle to avoid the claustrophobia of walking in a big crowd, I snapped this photo of the RCAF Snowbirds crew heading to their planes to begin their act. I've interviewed a couple of the Snowbirds personnel for Volume 1 of my book, so now I'm even more interested in their work than before. 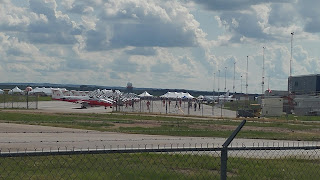 From our spot in the parking lot, we watched the Snowbirds taxi onto the runway: 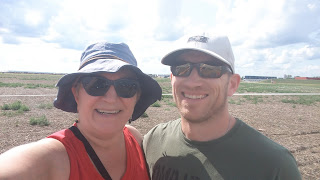 Our grins say it all. My son and I think these pilots are AWESOME!

I loved seeing the planes' shadows in the clouds.


And that's it from the Moose Jaw Air Show 2019. I can't wait to hear from some of the fine folks I met at this show. Stay tuned this fall for the release of Flight: Stories of Canadian Aviation, Vol. 1.

Posted by Deana Driver at 3:18 PM No comments: