Author finds hope in the Questions and Answers of kids

Ed Olfert is a master at sharing hopeful stories. He grew up in Kerrobert, Saskatchewan and found his bride, Holly, near there. They raised their family on their farm while Ed busied himself in a multitude of vocations including mining, working as a welder, driving trucks, doing mechanical work, serving as houseparent in a Christian high school, ministering a Mennonite church, and operating heavy equipment.

In 2015, Ed came to DriverWorks Ink with a collection of hope-filled stories he had written for the Prince Albert Daily Herald. We were honoured to help him publish his inspirational columns, which reflect on his lifelong search for glimpses of God and glimpses of good in everyday life and the people around him. Rather than being preachy, Ed's stories are about family, neighbours, and friends, and include lives that we might not naturally connect to God, to awe and mystery. 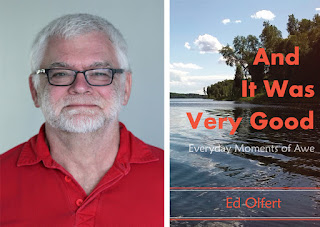 In this time of pandemic, isolation and fear, we need to have hope. We proudly offer one of Ed Olfert’s short stories from his book And It Was Very Good – Everyday Moments of Awe.

This story by Ed Olfert is titled “Hard Questions and Answers”.

"We are in a P.A. carwash when the call comes from our daughter-in-law. Holly’s hand waves suddenly in the window I have just begun to rinse. “We have to go now!”

The rinse will have to wait.

As we head out of town, Holly explains what she was able to understand from the frantic phone call. Our daughter-in-law, her two little boys and her sister, were on their way into town for soccer. On the Muskody Bridge, a motorist appeared to be having problems, and as our daughter-in-law got out to offer assistance, that person plunged over the edge. Our daughter-in-law was part of the attempted rescue effort. Now, she must stay to report in more detail to police. Can we pick up the boys?

When we arrive, the bridge deck is crawling with emergency folks and vehicles. We find our family wedged between two police cars. Our daughter-in-law gets out when she sees us. Hugs are exchanged, tears are shed. Holly opens the back door. Six-year-old Jordan and three-year-old Josh look up at us. Holly asks if they want to come with us. Jordan, who is shaking uncontrollably, whose eyes are huge, simply nods. Josh announces, “I need to bring my toolkit!”

Josh gets out, lugging his tools. He follows me around to the driver’s side of our truck. Holly scoops up Jordan, deposits him in the back seat, takes off her coat and covers him.

The fifteen-minute ride to their house is mostly done in silence, except for Josh’s periodic wondering, “Will the firemen be able to find her?” Jordan’s eyes remain wide. I reach back, put my hand on his knee.

At the boys’ home, Jordan climbs onto the couch. Holly finds a blanket to cover him. His eyes are dark, troubled, confused. Josh, meanwhile, has a need to play aggressively for a time. A dinosaur toy is produced; it is switched on, and as it wobbles noisily across the floor, Josh knocks it over, sets it up, knocks it over again. When he runs off to find another toy to crash, Holly picks up the dinosaur, which is still writhing noisily on the floor. She asks Jordan, “How do I turn this thing off?” A six-year-old’s smirk appears on his face, “You have to push the button on the poop!”

The boys need to talk, not a lot, but need to talk about the bridge experience. Josh repeats several times, “I’m scared, I’m scared of what happened!” He is obviously struggling to find words to express feelings of confusion. Jordan, meanwhile, has less to say – he will internalize this – but he says, quietly, “This has been a horrible day.” He alternates between youthful teasing and giggling and struggling with weighty stuff. “Maybe she was on drugs.” When Josh again wonders, “Do you think the firemen could find her?”

We sit with the boys for several hours. It feels like Holy time, a time to create a space for these two boys to express, to wonder, to grieve, to struggle to find words to approach this new reality. When you are three or six, it is almost impossible to use language to make sense of this, to touch despair, hopelessness. That is true for parents and grandparents as well, and we sit together in this space where these hard topics might be approached ever so tentatively. Trust seems an important starting point. In this sense, the boys have been     well prepared. This is not a time for answers, beyond the undergirding assurance of safety, continuity, love.

That night, the boys sleep well.

As I pondered and prayed through this experience in the past days, I realized that the paths of the young boys’ struggle to sort out deep spiritual complications in life are closely connected to my own. Truly hard issues are not resolved, in my experience, by someone approaching with a truckload of answers. Rather, it is in the identifying of the questions and in the permission to sit with those questions, to live in that tension, to hold that tension loosely. At some point, the deepest questions will change, probably without clearly defined answers, and hints of growth, understanding, wisdom will be left in palms that are held open.

It is an honour to be present, to be invited into that struggle, particularly so when it is written on the clean, innocent slates of young children, struggling to understand, struggling to live with integrity."

Read a review of the book.

Please contact DriverWorks Ink for permission to reprint any of this article.

Posted by DriverWorks Ink at 8:33 PM No comments: