Three of our books published by DriverWorks Ink in Regina, Saskatchewan, Canada have won Next Generation Indie Book Awards! 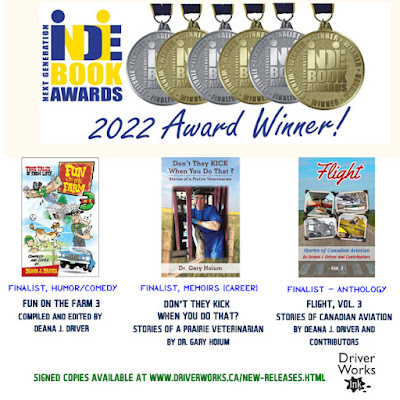 Fun On The Farm 3 - True Tales of Farm Life, compiled and edited by Deana J. Driver, was a finalist in humor/ comedy.

The book shares more funny stories of growing up on, working on, visiting and/or living on a farm. Twenty Prairie writers including author/ publisher Deana J. Driver tell their tales of annoying cattle, overly curious farm kids, stubborn pigs, confusing technology, and more. This is the third and final volume of the popular Fun On The Farm series and has been described as "even funnier than the first two!"

(A donation form books sold is being made to the Lung Association of Saskatchewan in honour of the Driver family's history of respiratory illnesses.) 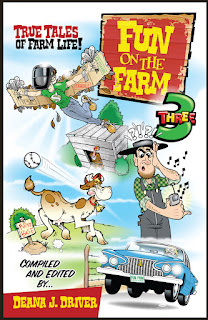 Flight - Stories of Canadian Aviation, Vol. 3, by Deana J. Driver and Contributors, was a finalist in anthology.

We've been told it's a great addition to the Flight series. "What wonderful reading – astonished at the work you did in putting the book together!" 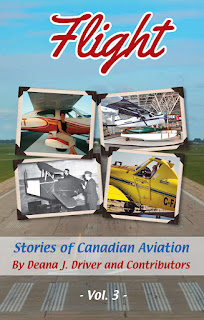 Don't They Kick When You Do That - Stories of a Prairie Veterinarian by Dr. Gary Hoium was a finalist in career/ memoir.

If you like the James Herriot series All Creatures Great and Small, you'll enjoy Dr. Gary Hoium's amusing stories of his adventures, experiences, and interactions as a mixed-animal veterinarian in Weyburn, Saskatchewan. Gary's style of writing is humorous, heartwarming, and illuminating - with fascinating insights into the people and animals he worked with during his 40 years as a veterinarian. Tales of cattle, squirrels, hogs, dogs, cats, sheep, and the men and women who love them are wrapped up in Don't They Kick When You Do That? "This witty vet is highly entertaining," said a reviewer.

(A donation from books sold is being made to the Saskatchewan Cancer Foundation in memory of Gary's sister Lois.) Thank you to Next Generation Indie Book Awards for these honours!

Posted by DriverWorks Ink at 11:33 AM No comments: