On February 4, Al and I were honoured to once again hang out with the inspiring eight-time cancer survivor Dionne Warner and her wingman/husband Graham. This time, we were at a fundraising event in Regina, Saskatchewan for Prairie Women On Snowmobiles. These 10 warm-hearted Saskatchewan women were in the midst of their eight-day journey through Saskatchewan to raise money for breast cancer research.

We were pleased to attend the fundraiser and support these women on their quest. We were also pleased they had invited our favourite multiple-cancer survivor to be the guest speaker for their event in Regina. Dionne is the subject of our award-winning best-selling book Never Leave Your Wingman, by the way.

Here is a photo essay of that evening. Enjoy! 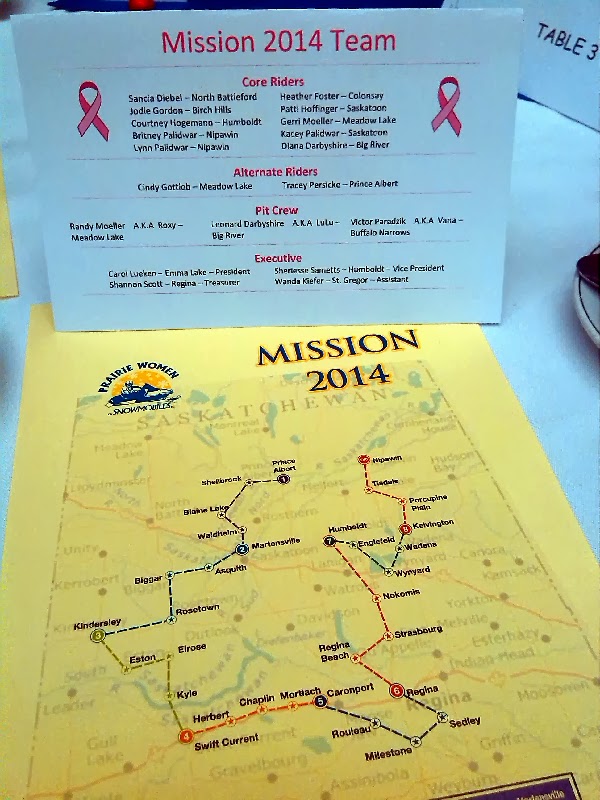 The women who participate in this ride come from different communities in Saskatchewan. Some have joined for the first time this year and others have participated in the ride in other years as well. The 2014 trek had riders from eight different communities. They met in Prince Albert, then took the zig-zag route down south and were heading back up north again, ending their ride in Nipawin. 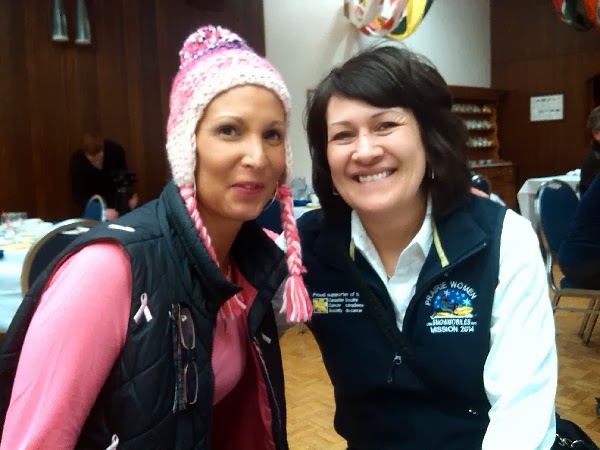 Eight-time cancer survivor had a visit with Gerri Moeller of Meadow Lake, SK, the lead rider for the 2014 trek. 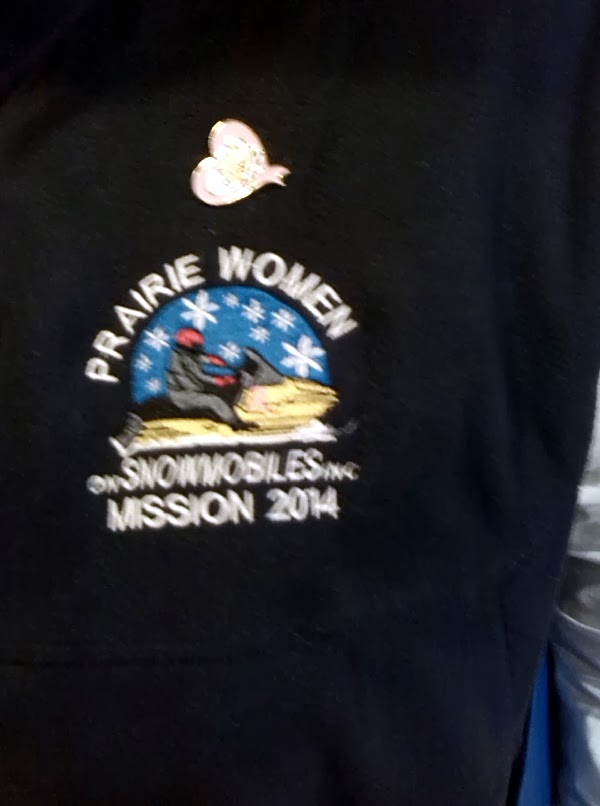 Although a little fuzzy, this photo shows the Prairie Women on Snowmobiles crest, which the riders, pit crew and executive proudly wear on their vests. 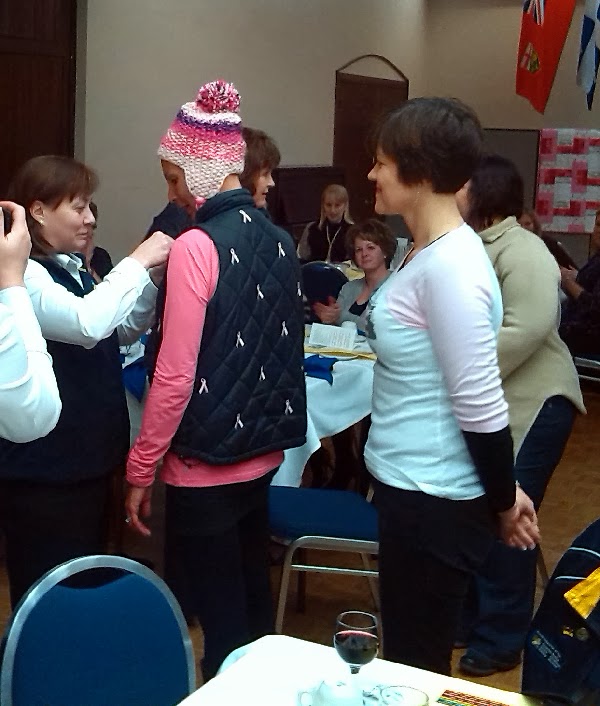 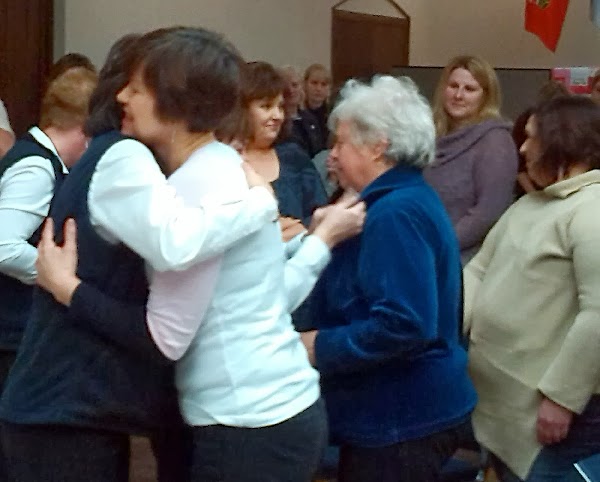 What a nice moment for these courageous survivors! 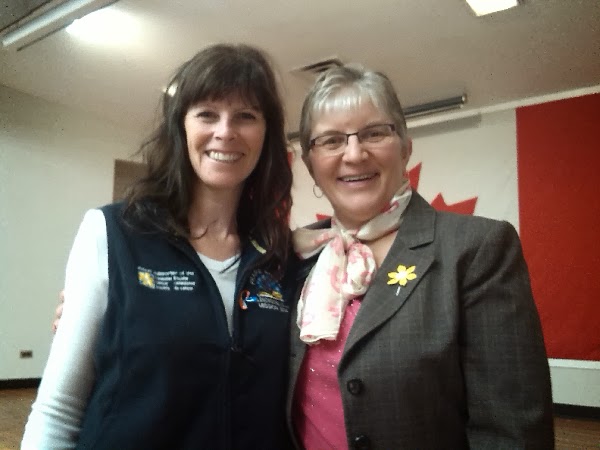 Shortly after arriving at the event, PWOS rider Sancia Diebel of North Battleford came up to us and asked, "What is DriverWorks Ink? It sounds familiar to me and it's driving me crazy!" We laughed and recalled that we met each other at the North Battleford Agri-Mex Home, Trade and Farm Show last year, where we had a booth to sell our books (and we'll be there again from April 3-5 this year).
What makes Sancia special - aside from the facts that she put her life on hold for 10 days to participate in this ride and that she remembered meeting us somewhere before? Sancia is from England and came to Saskatchewan nine years ago, following a 'cowboy' and making her new home in North Battleford. England's loss is definitely our gain. 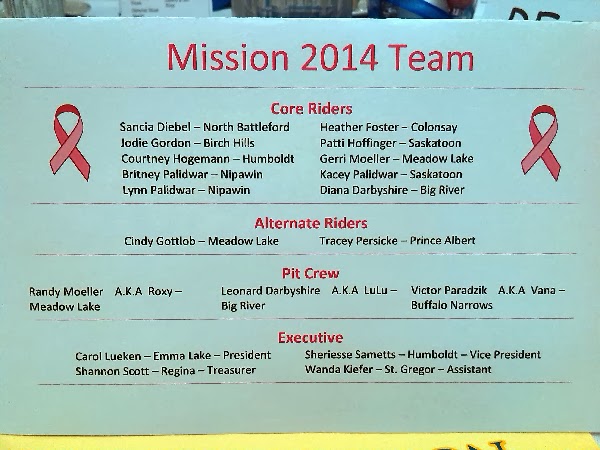 All of the riders introduced themselves and told us why they were participating in the Prairie Women On Snowmobiles 2014 ride. They've lost moms, grandmas, godmoms, sisters, and friends to this disease. It's a cause near to their hearts, and to ours. 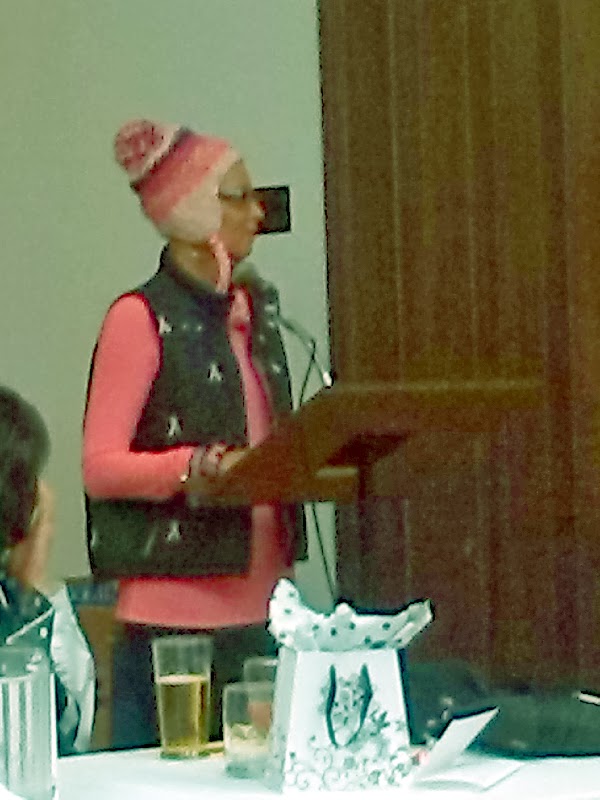 It was time for Dionne Warner to share her story of being diagnosed with breast cancer at age 30, and overcoming not only that but seven diagnoses of other cancers since. 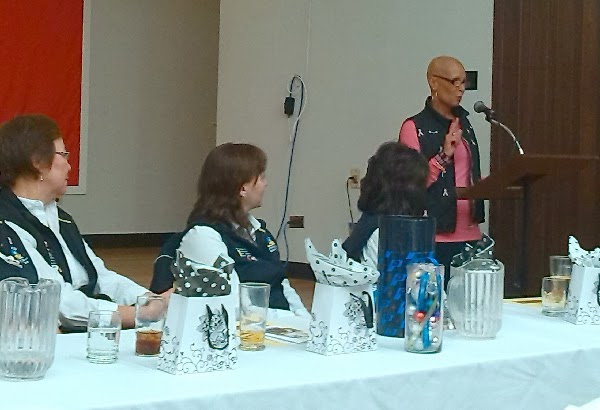 You could have heard a pin drop as Dionne shared her story of courage, love and hope. 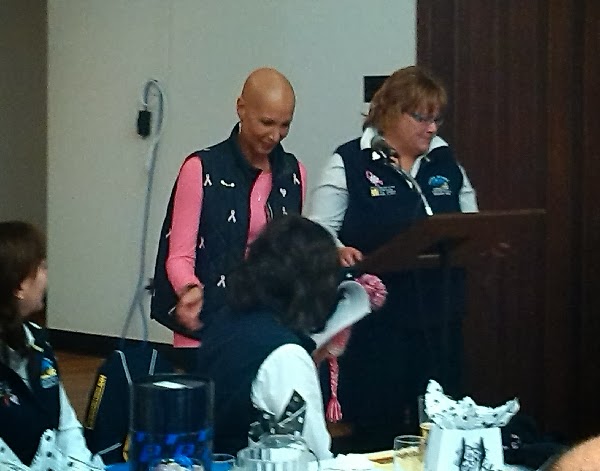 Prairie Women On Snowmobiles' treasurer Shannon Scott thanked Dionne for her words of strength and encouragement. 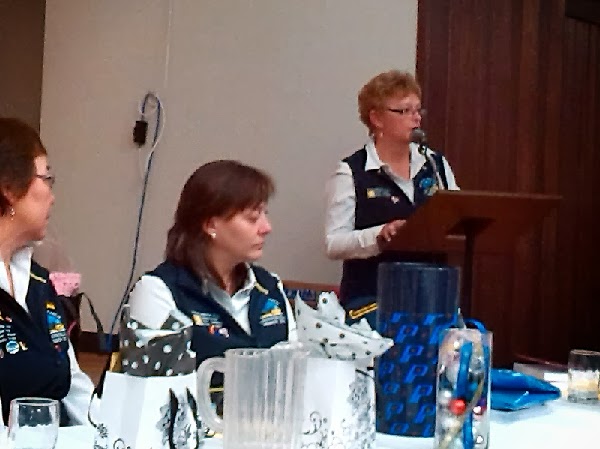 Prairie Women On Snowmobiles' president Carol Lueken shared statistics about the ride, which began in 2000 and has raised more than $2 million for breast cancer research to date! Way to go, ladies! 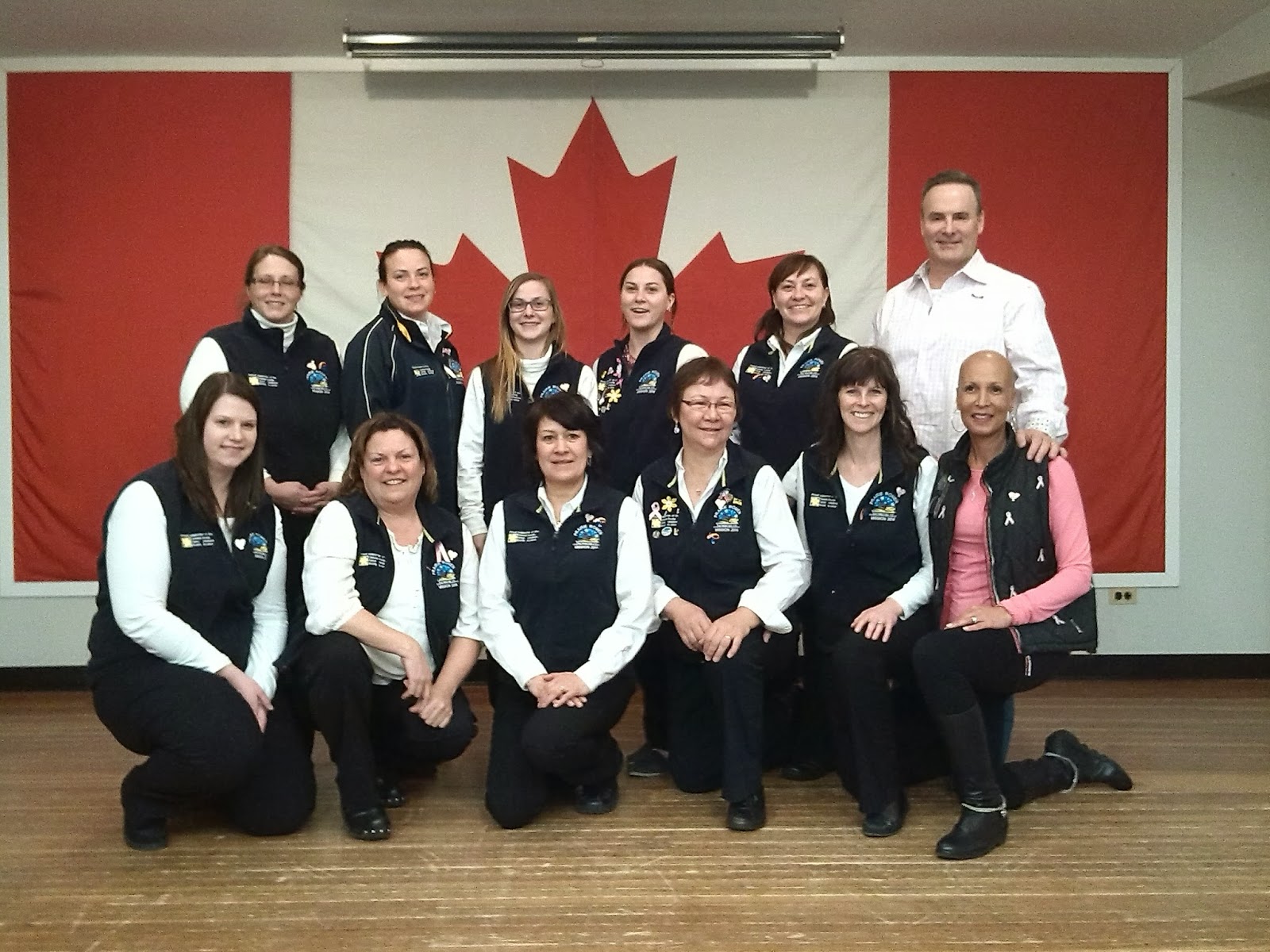 Here are the riders for this year, joined by Dionne and Graham Warner. Graham is the tall guy in the back row. Bet you don't hear that too often, do you, Graham? 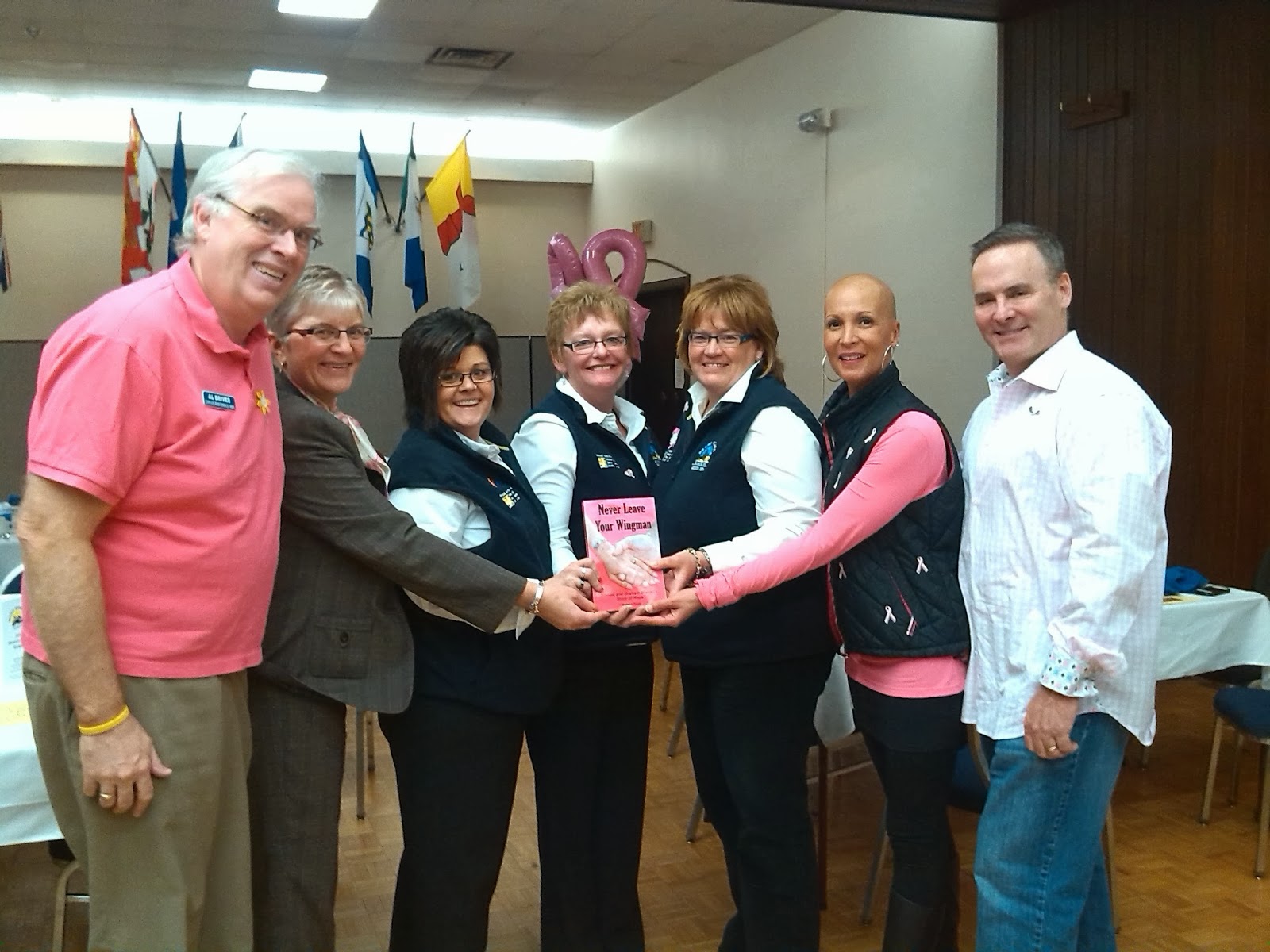 Al and I posed with Dionne and Graham, surrounding the executive of this wonderful organization. (They're holding our Never Leave Your Wingman book. Nice, huh?)
From left to right: Al and I, Wanda Kiefer, Carol Lueken, Shannon Scott, Dionne and Graham Warner.

Thank you for the invitation to this great fundraiser, Prairie Women On Snowmobiles.
Ride on, ladies!

Time to Do Something About Cancer, World!

It's World Cancer Day and, frankly, I wish this day didn't exist.

I wish there was no such thing as cancer and that we didn't all have to even think about it.

But wishes are wishes and this is reality. Cancer exists and we have to join together in this battle to raise awareness, to work on prevention, and to raise funds to beat this evil disease.

People are being diagnosed all the time. Canadian Cancer statistics note that:

• An estimated 187,600 new cases of cancer (excluding about 81,700 non-melanoma skin cancers) and 75,500 deaths will occur in Canada in 2013. • More than half (about 52%) of all new cases will be lung, breast, colorectal and prostate cancers. • Cancer is the leading cause of death in Canada and is responsible for about 30% of all deaths.

• About 2 in 5 Canadians will develop cancer in their lifetimes and 1 in 4 will die of the disease.

But here's some good news:

• 63% of Canadians diagnosed with cancer will survive at least 5 years after their diagnosis. • At the beginning of 2009, there were about 838,724 Canadians living with a cancer that had been diagnosed in the previous 10 years.


And we're making more strides all the time to eradicate this disease or at least reduce it to the level of a disease that isn't so devastating or so deadly.

I enjoyed this article listing 10 Things We Can Do About Cancer, including how to live well, take care of ourselves, take care of others, and support the cause.

My mother died of pancreatic cancer in 2011. We have also lost numerous other family members and friends to this horrid disease. Enough, I say.

Tonight, we're going to a fundraising event to support the Prairie Women on Snowmobiles as they ride through Saskatchewan and raise money for breast cancer research.  Eight-time cancer survivor Dionne Warner, the inspiring subject of my book Never Leave Your Wingman, is speaking at the event. My husband (and book publishing partner) Al and I will be there with Dionne her wingman, her husband Graham, and we will keep on spreading her story of hope and courage in this journey.

Posted by Deana Driver at 3:04 PM No comments: