A Thank-You Note for the Cream Money book 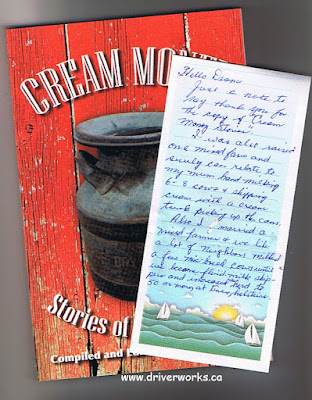 A thank-you note came in the mail the other day, from a woman in Alberta who received our Cream Money book as a gift from a friend.

As this book has already done many times since it was launched on May 23, 2015, Cream Money: Stories of Prairie People prompted this woman to remember her years on the farm and to share them with us:

"I was also raised on a mixed farm and surely can relate to my mum hand-milking 6-8 cows & shipping cream with a cream truck picking up the cream. Also I married a mixed farmer & we, like a lot of neighbours, milked a few mix-breed cows until we became fluid milk shippers and increased the herd to 50 or more, at times, Holsteins.

“After finding it so difficult to hire help for winter chores, we sold the quota before the price rose. Then I went back to shipping cream but had to deliver it to Vermilion, where a cream truck met the few cream-shippers left. After it stopped, we left the calves on the cross-breds we now had and even bought the odd calf to put on the heavier milkers. I milked one, with the first milkers we had used earlier, until March 2014, when the old favourite dried up – just couldn’t sell her so I had her put down mercifully.

“Thank you again. I’ll write a thank-you to (my friend) for thinking of me.”

This lovely thank-you note came with another pleasant surprise – a cheque made out to the Saskatchewan Lung Association,“in appreciation of the work of DriverWorks Ink in publishing Cream Money.”

We were delighted to pass that cheque on to the Lung Association and to express our thanks for her thanks. Win Win Win!

Posted by Deana Driver at 2:30 PM No comments:

A Future Reader Is Why I Write 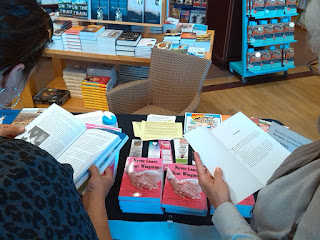 It always blows me away when children recognize the Never Leave Your Wingman book. I am slowly getting used to adults telling me they've read and enjoyed this inspiring book about a seven-time cancer survivor and her wingman husband, but children's comments always surprise me. Pleasantly. 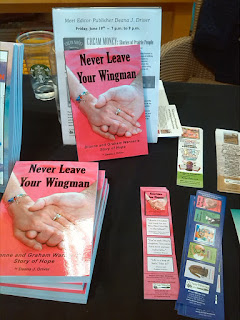 At a recent signing at the Chapters bookstore in Regina, Saskatchewan, a little girl came up to me and said, "I have this book at my school!" She gently touched the book cover as though it was a precious diamond or her favourite toy.

I asked which school she attended. She replied, "Douglas Park."

I asked about her school because I and Dionne Warner, the subject of the book, have each spoken at various schools in Regina and elsewhere. I have not yet presented at that school and I wasn't sure if Dionne had either, but no matter. I was pleased that she expressed interest in the book.

As they were walking away after our chat, the little girl's father commented that his wife has posted on Facebook about the Never Leave Your Wingman book. Again, I was pleasantly surprised but I did not ask any further questions.

I know! That was very difficult for this woman who has spent her entire adult life asking questions of others. But I fought my inquisitive journalist urges and refrained. Instead, as they walked away, I called out to the girl, "Keep reading and learning!"

She called back, "I don't know how to read!" I again was surprised. She was so intelligent and interested. I had not thought about her young age until then.

"I'm sure you'll learn soon and be great at it," I told her.

I turned back to my table of books and said to myself, "And that is why writers write. For future readers like her." 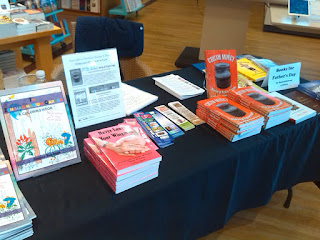 Posted by Deana Driver at 10:35 PM No comments: