Last week, I was privileged to represent the Saskatchewan Publishers Group at the annual general meeting and professional development sessions of the Association of Canadian Publishers (ACP), in St. John's, Newfoundland.

Yep. In ST. JOHN'S, NEWFOUNDLAND! I'll blog about that amazingly scenic place later ... but today's blog is about the Canadian book publishing industry.

So at these meetings, I learned a lot of stuff (and shared some information from Saskatchewan) about what's happening - and not happening, unfortunately - in the Canadian publishing industry these days.

What's happening is a continued optimism from the women and men who put their heart, souls, funds and faith into publishing Canadian-made books on a day-to-day basis.

A public opinion poll shows that four out of five Canadians read regularly. They read based on the author, the title, and then whether the book has been recommended to them. (So THANK YOU to all our customers who follow our DriverWorks Ink authors and recommend our books to other readers!)

What's not happening is the bazillion dollars in income that we all hope and pray will some day be ours as book publishers - or at least enough income to continue to pay the bills as we strive to share the written work that is so important to us, our authors, and our country's culture. Bookstores are closing; the market is tighter than it's ever been; we worry about multinationals purchasing our one remaining national bookstore chain; e-books aren't the panacea that some thought they might be; publishers are aging; and we just can't seem to get schools and libraries to take notice of and purchase our Canadian-authored-and-published books!

Oh - and the public doesn't seem to be aware of Canadian books. Or Canadian publishers.

That made me sad.

Al and I spend a LOT of time on the road, visiting various communities across the Prairie provinces and talking about our DriverWorks Ink books, written by Prairie authors (including me). We can't count the number of times that people have come up to us at a trade show and stated:
So either these potential readers have not been paying attention or we Canadian publishers aren't doing a good enough job of getting the word out there about our work and our authors' work. Or maybe a little of both.

The research shows that "publishers are not a strong part of the Canadian public consciousness," we were told at the ACP meeting. "Readers are more worried about authors being paid."

As an author who has been a 'not-quite-starving but often severely underpaid' freelance journalist for decades, I'm okay with the second part of that information. I'm glad that people who read in Canada are concerned that those who write the words should be paid a fair amount for their work. Canadian publishers are okay with that, too. We value our authors, and we pay them according to industry standards. In most cases, these writers are our friends. In many cases, these writers are us!

As an author AND a publisher, I'm disappointed that readers have not made the connection between those who write the work and the people who put that work into a publishable format for readers to enjoy. We work together with our authors to produce quality books. And I can promise you that in the next while, you're going to hear more from Canadian publishers about our important role in getting Canadian-authored and Canadian-published books into your hands, and some of the challenges we face in achieving that goal.

In Saskatchewan alone, we have more than 50 publishers who are members of the Saskatchewan Publishers Group, aka SaskBooks. DriverWorks Ink is one of those members. We at DriverWorks Ink sell our books on our own website (we have 16 titles at present and will be publishing more this fall), as well as through various physical stores, at trade shows, through the SaskBooks site and more. Search our books online by title or author and seven of our books will pop up with various e-book vendors as well!

At the Association of Canadian Publishers meeting, we heard that there are more than 75,000 Canadian-authored books listed on 49th Shelf, which is a project of the ACP. Some of our DriverWorks Ink books are listed there, and we will be adding more of our titles to that site in the days ahead - so that more Canadian readers can find us. We recently listed our books on Amazon.ca - so there is another place you can find us!

Next time you pick up a book, I encourage you to look a little closer at it. Check the second page - the one with the copyright information on it - and see who wrote the book, who put it together, where it was printed, and all those other fun details that you may never have cared about before.

Most importantly, READ CANADIAN - as the wonderful little lapel pin below says.

And Hug A Canadian Publisher Today.

Lord knows we could use a hug! 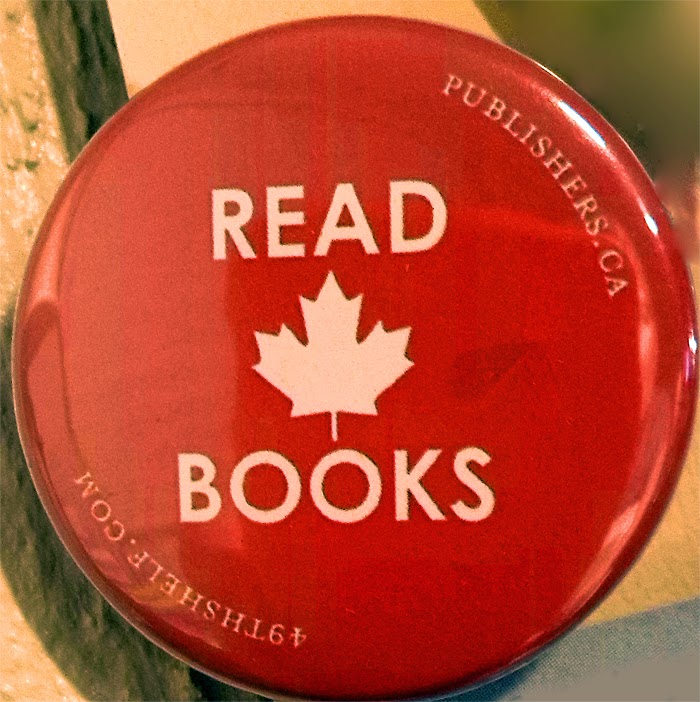 The weather might have been cloudy with the threat of rain, but it was all sunshine-like smiles on the faces of those who pulled a semi-truck and trailer today at Tug For Tatas in Regina, Saskatchewan, Canada - at a cancer awareness fundraiser on National Cancer Survivors Day. 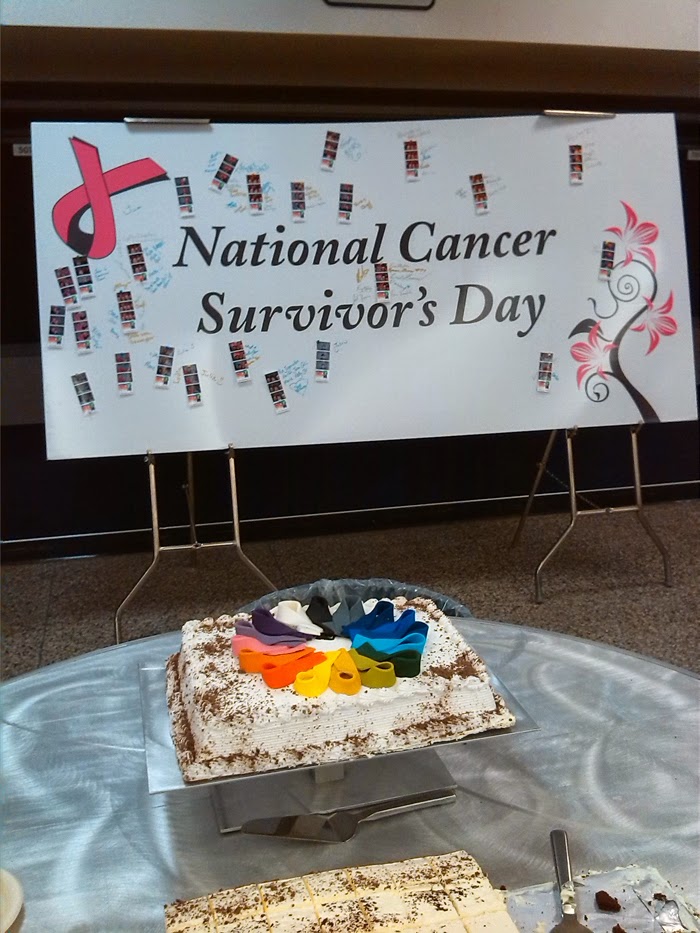 Don't you just love the cake? The ribbons represent the colours of cancer. 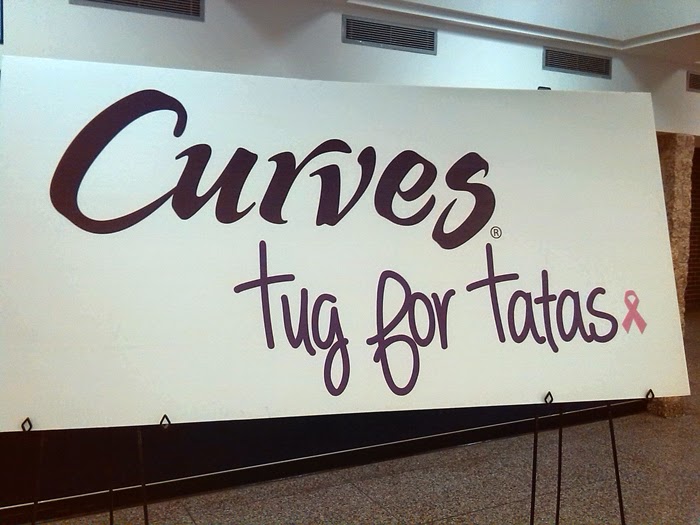 Yes, these are the people who organized this event - to raise funds for Breast Cancer Action Saskatchewan (BCAS).

This was the second Tug For Tatas event they've held, and I was honoured to be invited to both of these fun(d)raisers. As I said in my blog about the 2012 Tug For Tatas, Tug For Tatas is the brainchild of Tracy Thompson, owner/manager of two Curves fitness centres in Regina. Tug For Tatas 2012 invited teams of women to show their strength by pulling (tugging) a semi-truck and trailer 100 yards. Thompson and Sandi Ellert Day, the owner/manager of the other two Curves fitness centres in Regina, enthusiastically worked together on the project. 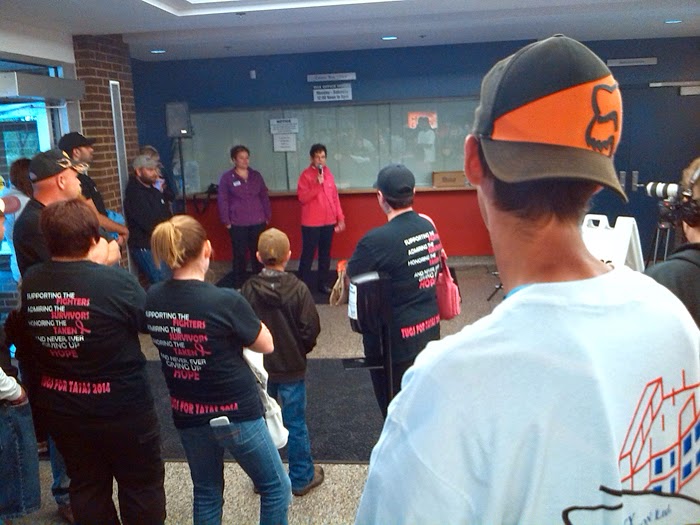 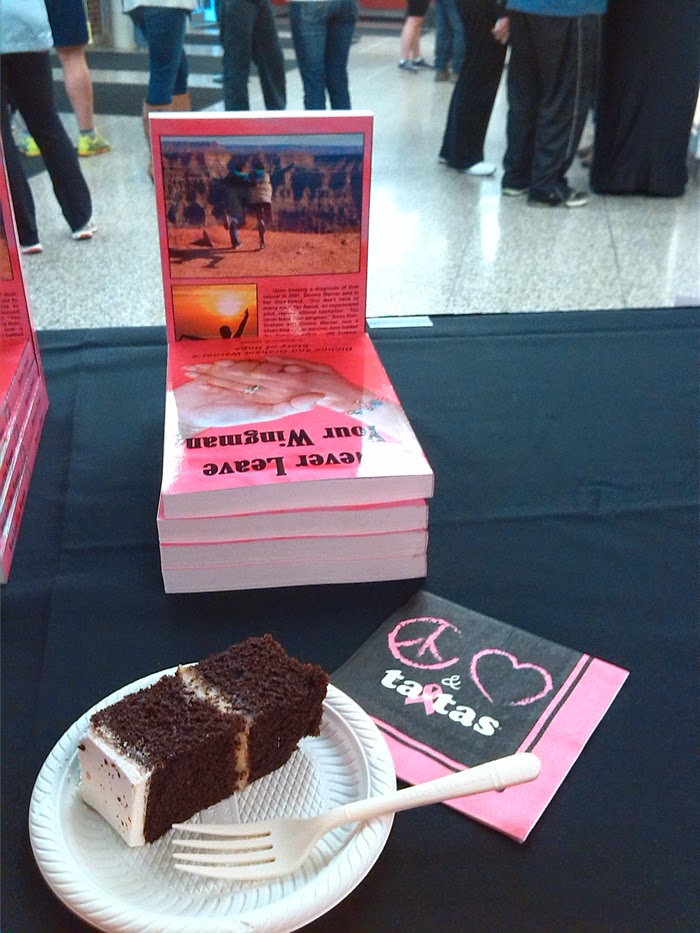 So while the teams were registering, I set up a table to show off our Never Leave Your Wingman book, about our favourite eight-time cancer survivor Dionne Warner ... and I was reminiscing about how the semi-truck driver in 2012 was Graham Warner of Warner Industries (and Dionne's husband and wingman, of course) ...

...when all of a sudden, Graham came around the corner and surprised the heck out of me! I thought he was supposed to be out of town (his plans changed, he said), so I was pleased to see him at this event, once again donating his time and the use of a Warner Industries semi and trailer for the cause. Thank you, Graham!

And then ... I convinced Graham that he and I should take advantage of the photo booth set up for survivors and everyone else who wanted to post their pictures on the National Cancer Survivors Day board (see top photo).

Graham's a good sport - as you will know by reading the Wingman book - so off we went to the photo booth...

And this was the result. 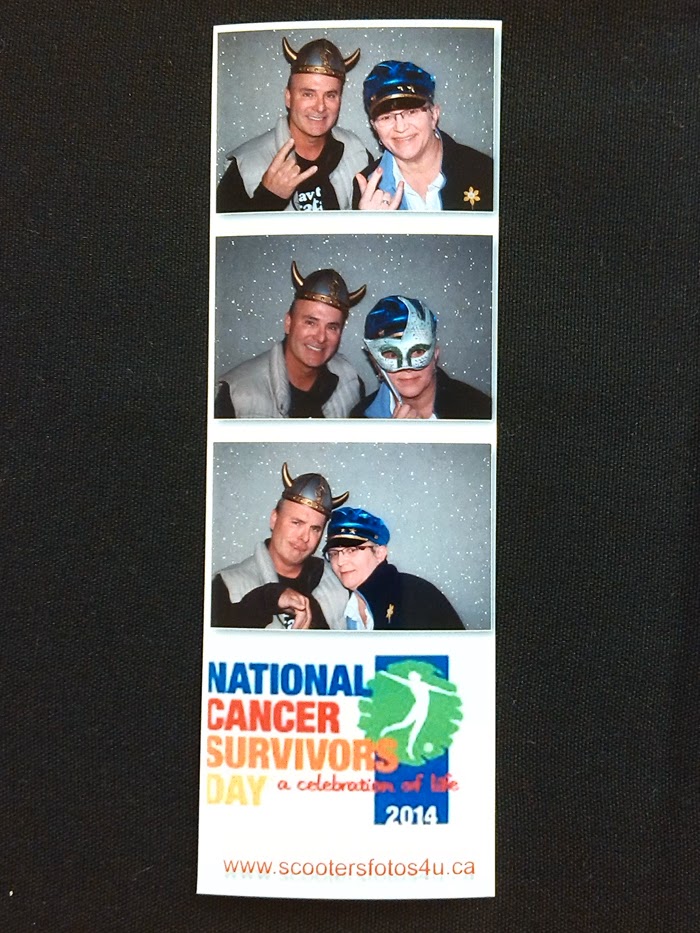 Oh, yes. We grabbed a couple of props for the occasion.
What? Did you think we always wear these hats?
Well, okay. Graham might - when it's time for Dionne's chemo treatment and she tells him what outfit she has lined up for him that day. But that's another story - the Never Leave Your Wingman story, to be exact.

But now back to Tug For Tatas. 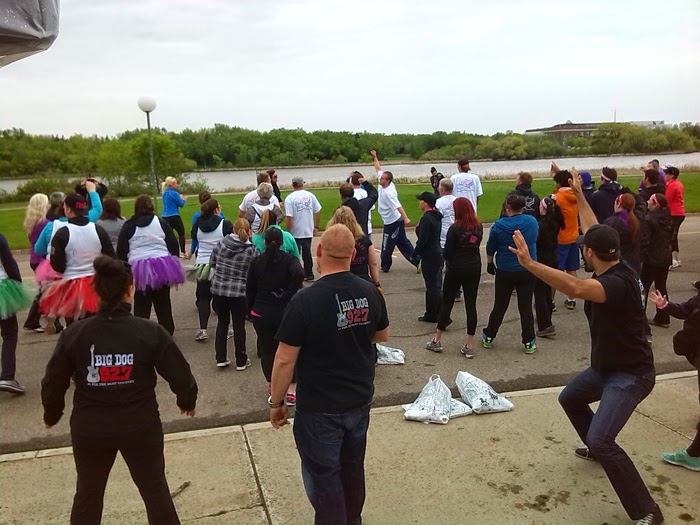 The teams went outside, in front of the Conexus Arts Centre beside Wascana Creek, and warmed up with a little Zumba. 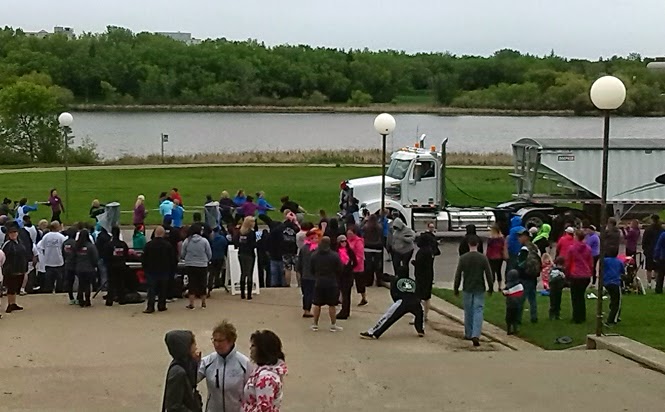 And he did a fine job. See? 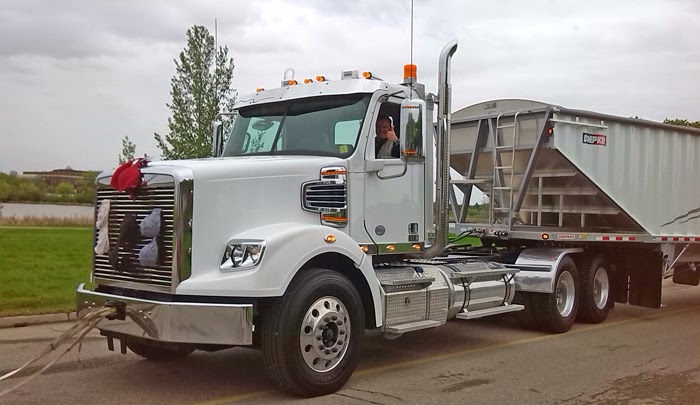 What? You can't see him? 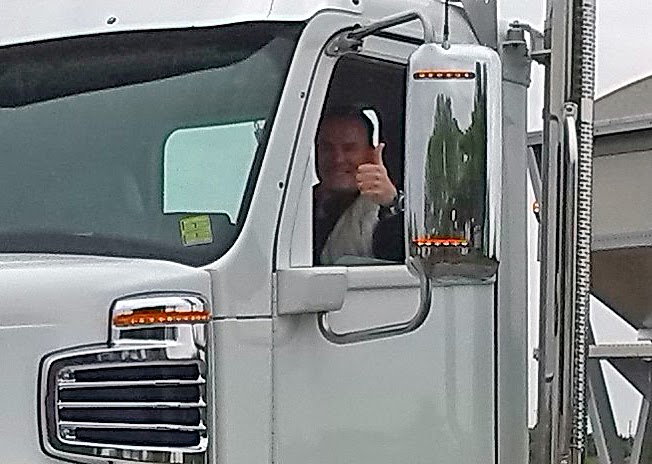 So let's get this party started. 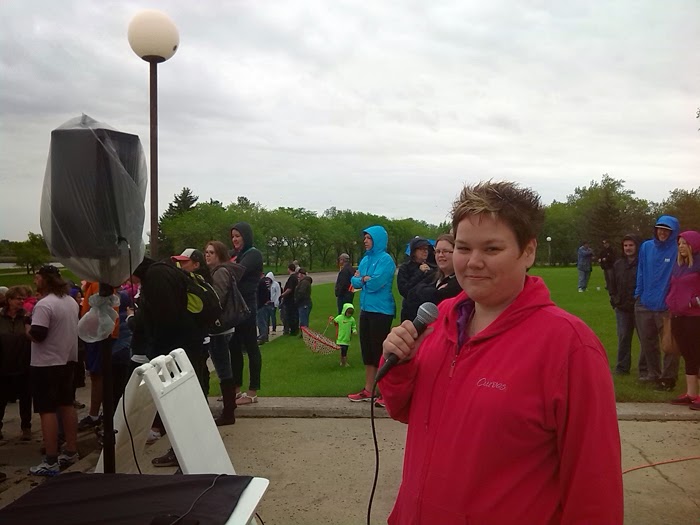 Curves Regina's Tracy Thompson took control of the microphone when Big Dog 92.7 radio staff grabbed the rope and took a turn at the challenge. 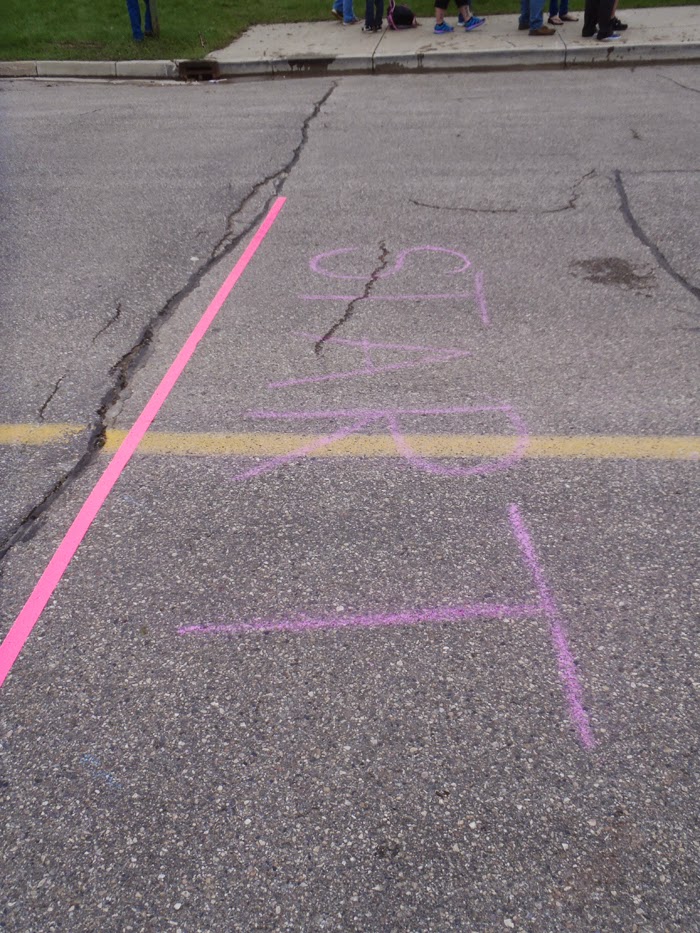 This is where the challenge began. 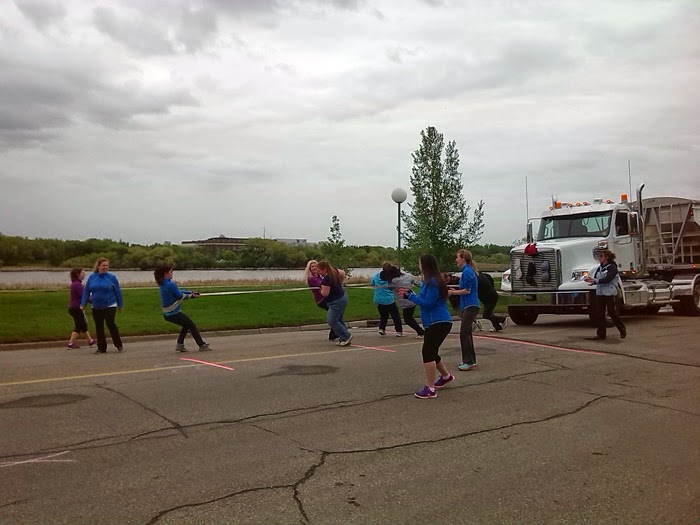 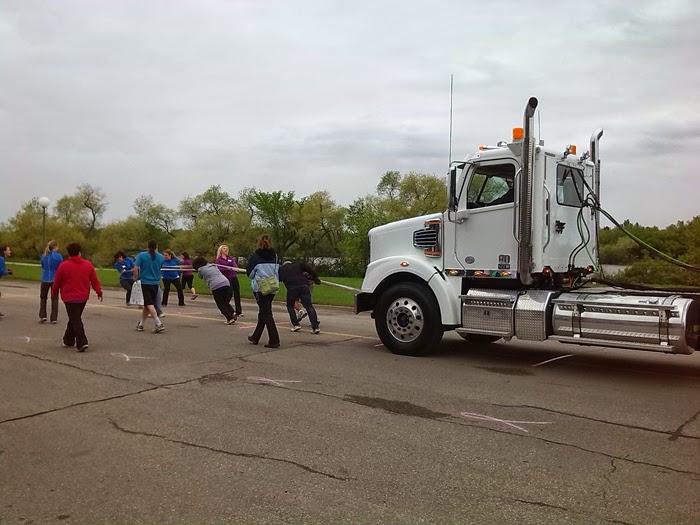 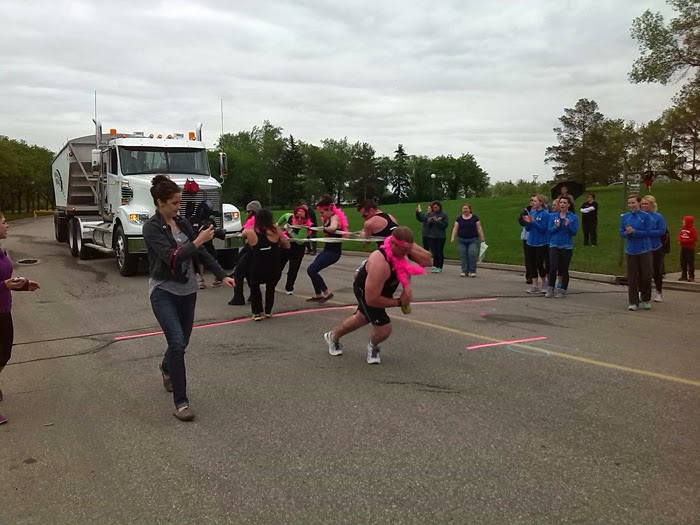 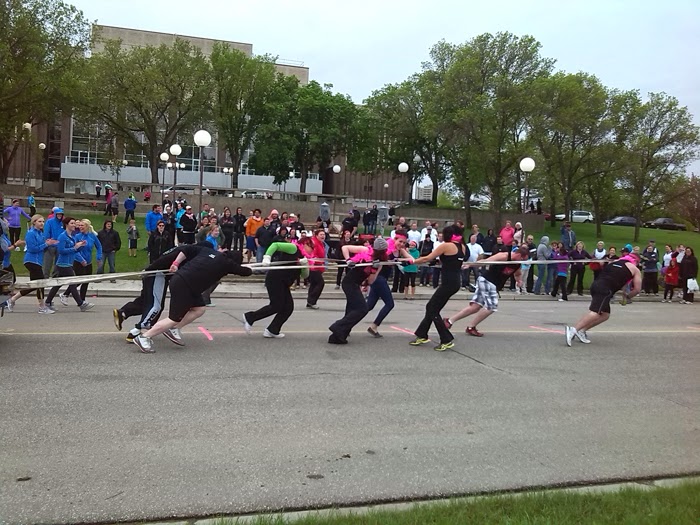 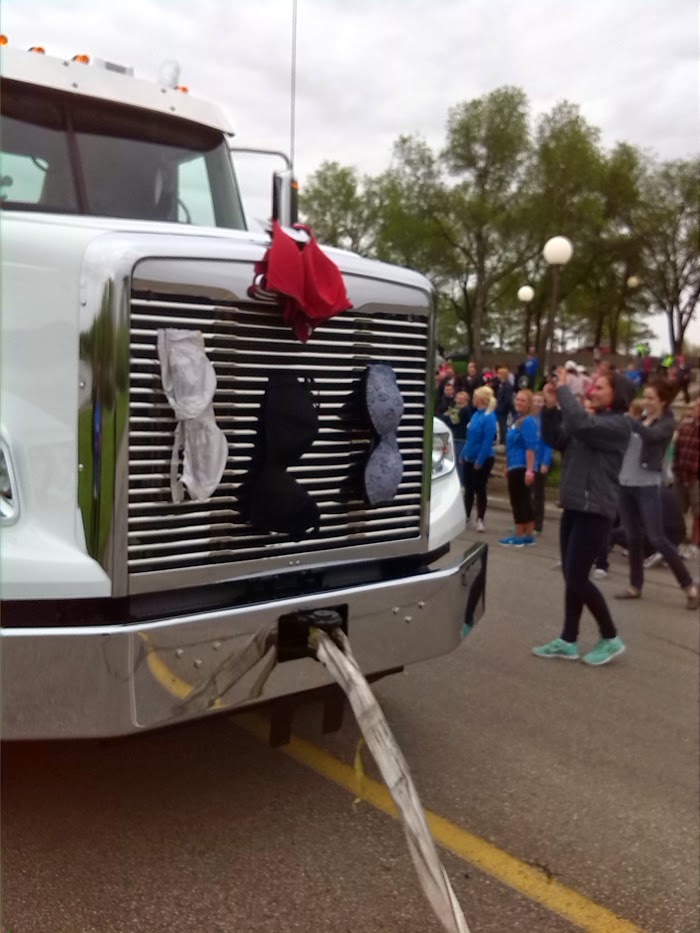 ... while enjoying the 'tatas holders' attached to the front of the semi. 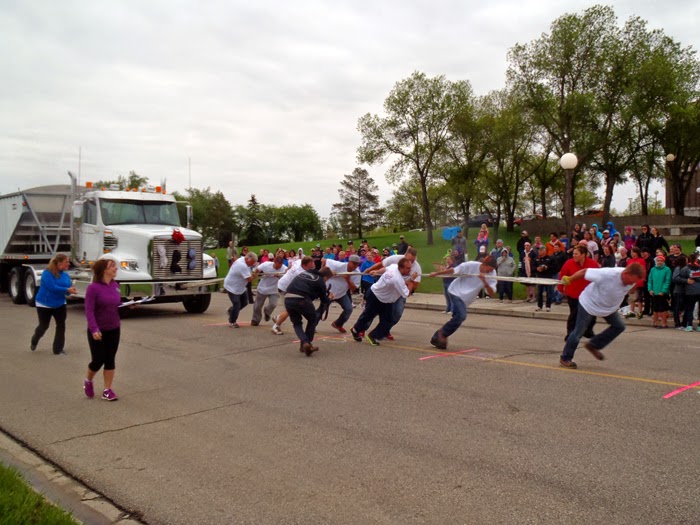 This year, there were co-ed teams, which added a whole new level of pulling to the event. 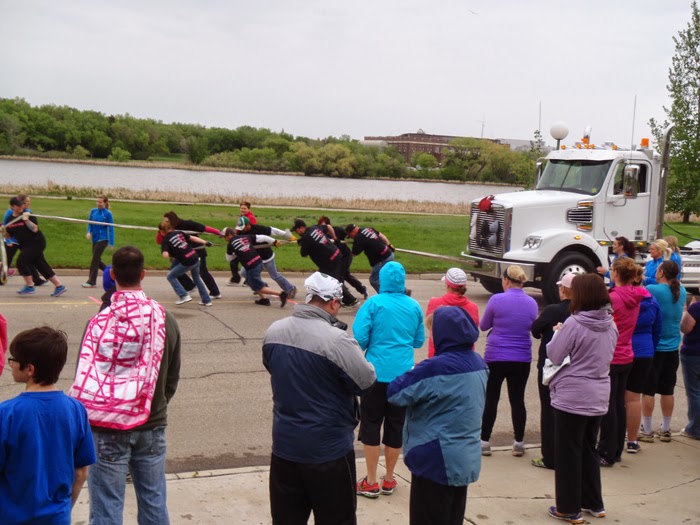 Everyone's affected by this disease, and it was great to see men out there lending their strength and support on Cancer Survivors Day. 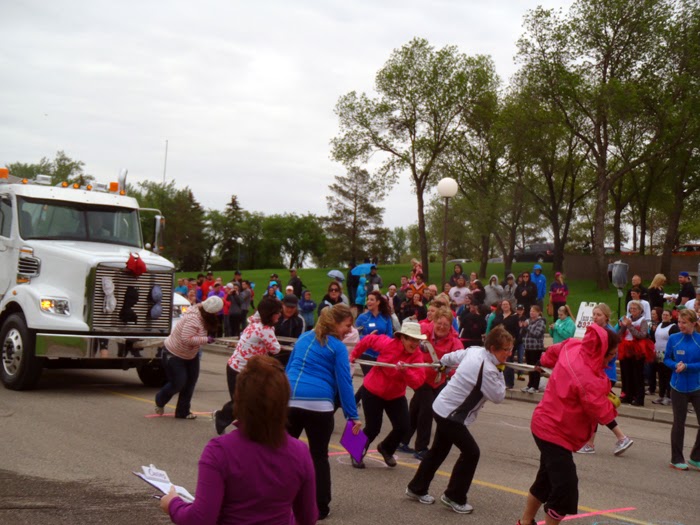 Members of Breast Cancer Action Saskatchewan got in on the fun with their own team. Well done, ladies! 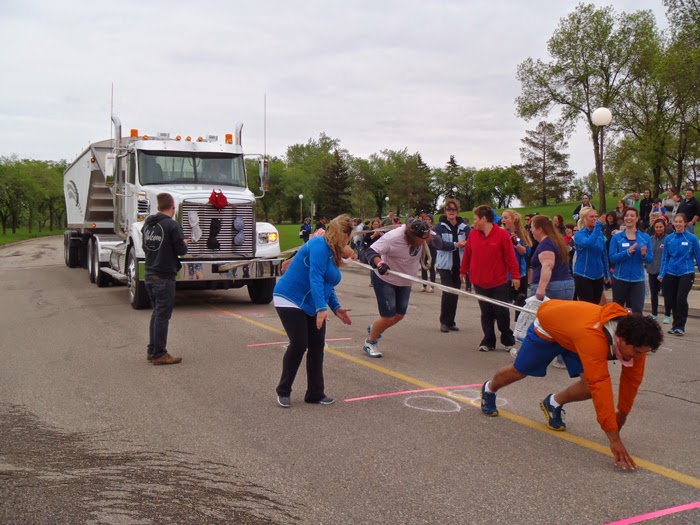 After all the teams had pulled, the call went up to see how 'few' people could pull the semi. This trio of men was up for the challenge. 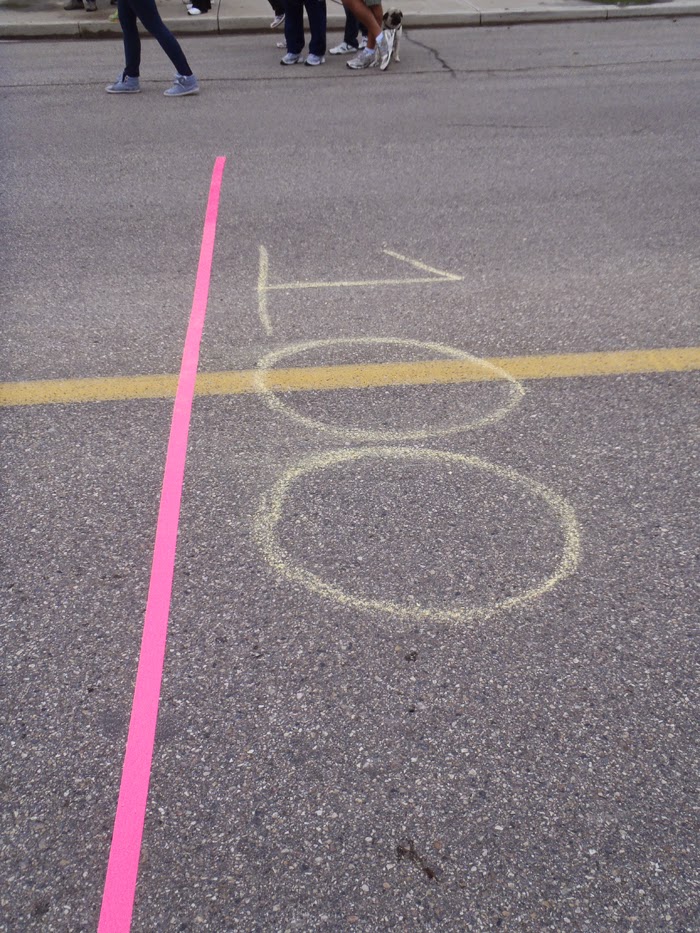 And this was the goal - pulling the semi to the 100-yard marker.
Every team did it! And every team was cheered on as they worked their way toward that finish line.

But wait.
The event was not over.
Members of Regina's finest - female Regina City Police officers - arrived to lend their might to the cause. 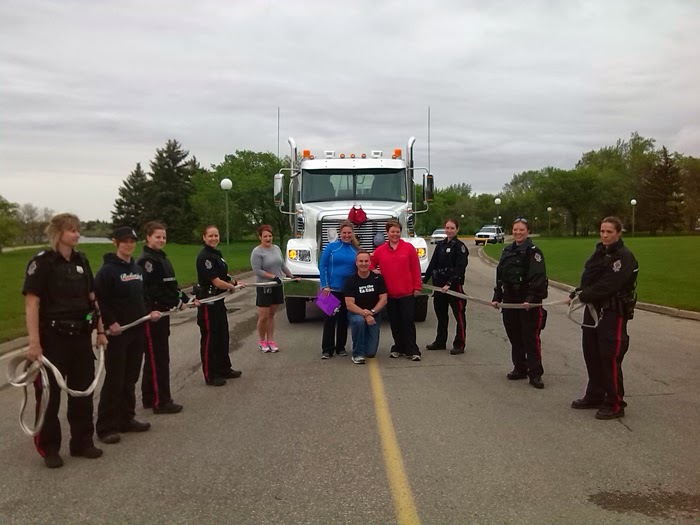 But first, a photo opp for the police women with semi-truck driver (and our favourite wingman) Graham Warner, and Curves Regina's Sandi Ellert Day and Tracy Thompson. 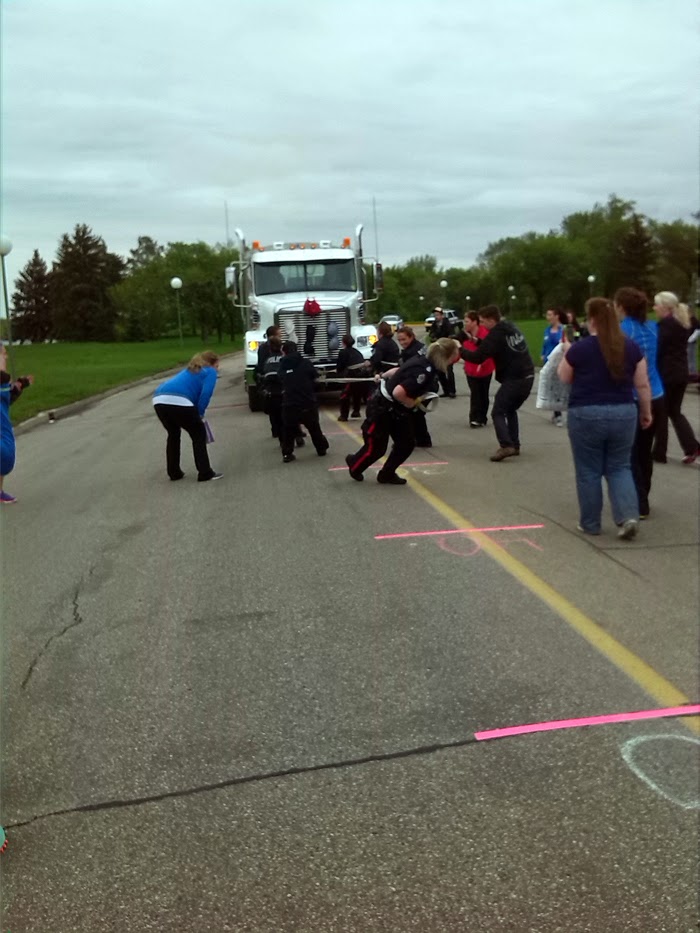 Okay. Now you can pull, ladies! 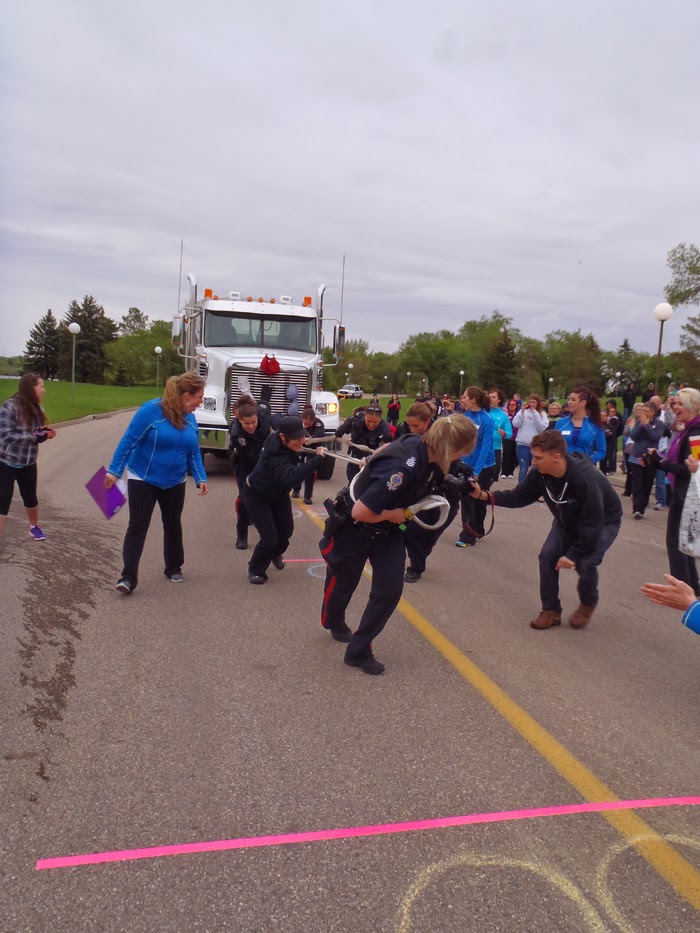 And pull they did! Good job! (They made it look easy.)

And here are the winning teams - with Tracy Thompson and Jill Collins: 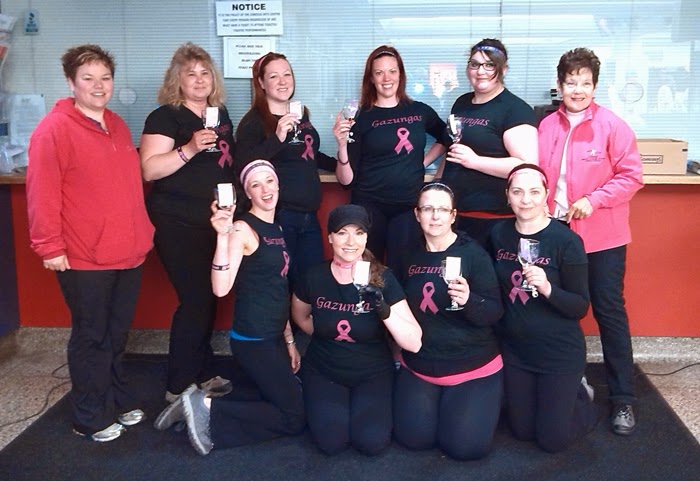 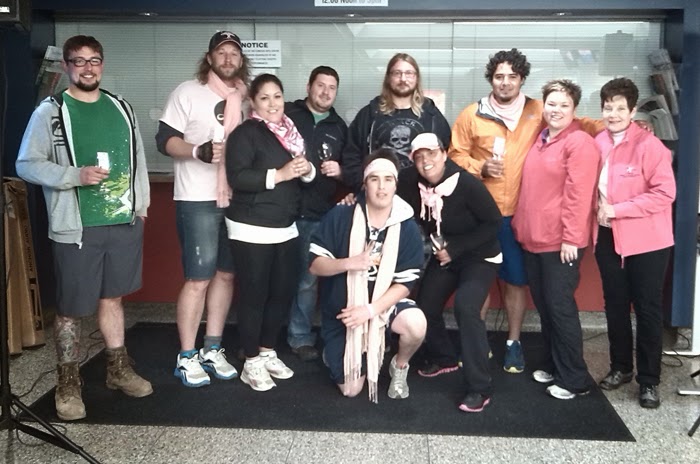 The co-ed team (minus some members who had to leave early). 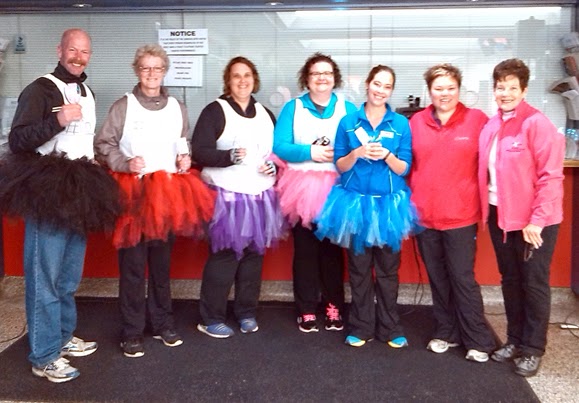 So a good time was had by all.
More cancer awareness happened.
Cancer survivors were celebrated.
Money was raised for a worthy charity.
And finally ... 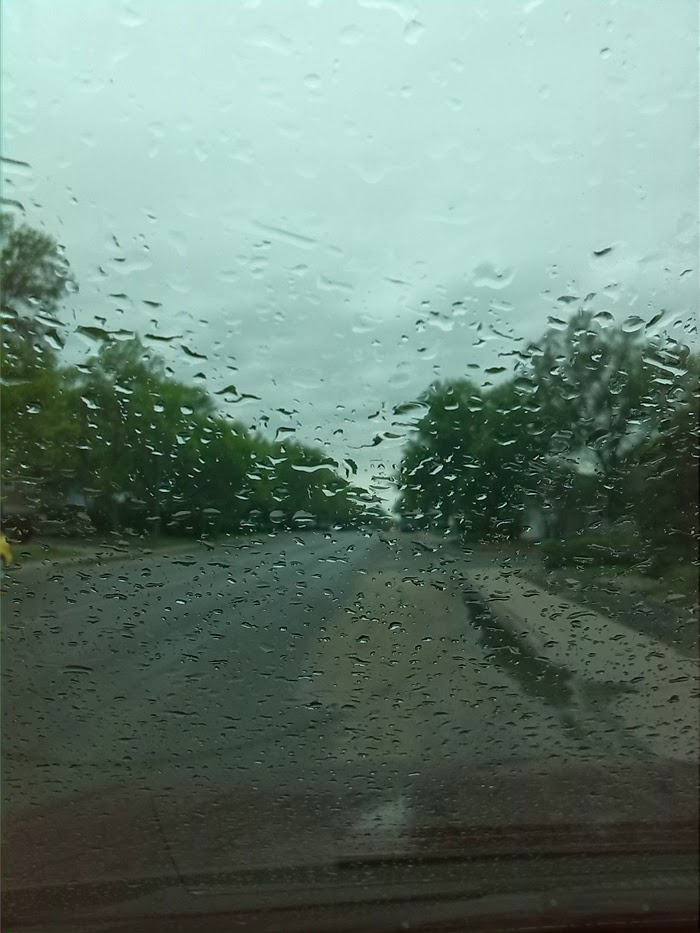 The rain stayed away until everyone was on their way home.

Good job, Tug For Tatas! We'll see you next time!

Posted by Deana Driver at 9:48 PM No comments: