I'm sending some pretty flowers out over the Internet to two people I do not know who helped to make a strange encounter at the shopping mall much more bearable.

Thank you for being so kind.

Here's my side of the story – because every journalist (and semi-retired journalist) knows there is always more than one side to every story.

As I approached my vehicle after coming out of a store, I watched a man in a large SUV truck drive into the spot in front of where I was parked. He came to a stop too late and knocked a shopping cart over onto the front of my vehicle.

When he got out of his Hummer, I calmly said, "Did you know you knocked a shopping cart into my vehicle?"

I was sure that it had not fallen hard enough to cause damage, so I wasn't really concerned, but I was frustrated that he had not seen it over the top of his big vehicle. "You should watch where you are driving next time and be more careful," I added.

He was not impressed. He replied that he did watch where he was driving and then said, "Did I put the shopping cart there?"

Um, what? Shouldn't you be watching for carts and other potential obstacles ... such as, maybe, children ... when you're driving?

Anyway, I replied, calmly, that he had not watched well enough and that he should be more careful.

He was obviously upset with me. He asked if I wanted him to move his vehicle. My answer went unheard because he ignored my reply that it wasn't necessary. He got back into his vehicle and backed it up a foot or more.

During this, I got into my vehicle, as did the woman who was parked beside me. She had seen, heard, and watched the whole thing.

The fellow then got out of his vehicle, looked over at someone that I couldn't see, swore while saying whatever he said that I couldn't quite hear (which I assumed was something negative about me), and carried on into the drugstore.

The woman in her vehicle looked over at me and shrugged her shoulders. We smiled at each other. I mouthed the word, "Special." She nodded and then drove away.

I was grateful for her kindness. We shared a mutual confusion and wonder about what the man was thinking. She understood me.

This rose is for her. 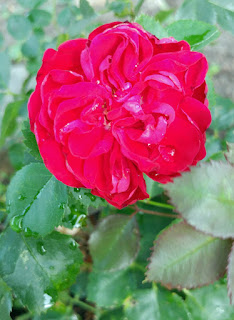 Now here's an interesting twist in the tale...

Just before I started my vehicle to continue on my way, an elderly man walked over, using his cane, and asked me to roll down my window. He then asked if I needed a witness.

He introduced himself as "an old retired police officer" and insisted on checking my vehicle's front to make sure there was no damage. He informed me that even though there was no damage, if he had not been retired, he would have charged this man with "undue care and attention".

I was surprised. I didn't think it was that serious. Just annoying.

And I was grateful that a complete stranger had walked out of his way to offer support like that.

So this rose goes to him. I am thankful for his kindness and offer of assistance after a strange encounter in a parking lot with a man who was having a bad day.

The driver of the Hummer was obviously unhappy before he even got out of his vehicle and was confronted by me. I could see it on his face.

In any case, I had enjoyed a lovely lunch and visit with a dear friend, so that had put me in a positive frame of mind to handle myself with dignity.

Today was a good day for me. On a lesser day, I don't know what I would have done. Maybe just stared and glared and then walked away. Maybe cried, most likely after I quietly got into my vehicle. Maybe nothing, and then been angry and stewed about it for hours. Maybe screamed, although that's not as likely since that isn't my character. I don't know. I just know that I was proud of the way I handled it and pleased with the way two strangers were there for me if I needed them.

It was a reminder also that we don't know another person's story. Even if we've talked with them about what they're thinking and feeling, we don't really know.

We haven't walked in their shoes. Or driven in their Hummers. (Winky face.)

Since we don't know what they're feeling or what they are living with in their everyday lives, we have to try to be kind.

Some days, that is easier than others. We do the best we can.

So this pretty flower is for that guy in the Hummer who was having a bad day. 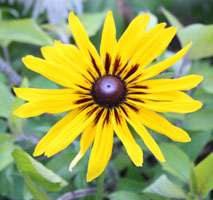 I hope tomorrow is better for him. And for us too.


Let's keep on doing the best that we can and not beat ourselves up for the things we did wrong today.

Tomorrow's a new day. Let's try to be better at life tomorrow.

Posted by Deana Driver at 9:59 PM No comments:

It's Potty Time in Europe

It's potty time in Europe! Yes, it's time to check out some of the places in which one can dispose of their ... er... waste while in France, Germany, and Switzerland.

On a recent vacation in Europe, my friend and fellow author Janice Howden and I saw amazing scenery, churches, canals, castles and more. But I was also intrigued by the variety of toilets we saw on our journey - because my weird mind works that way.


Posted by Deana Driver at 4:42 PM No comments: