A Family Connection or Just a Good Story

I meet the neatest people in the course of my work as a writer and book publisher.

A gentleman in British Columbia contacted me about a fascinating pilot I should interview for Volume 3 of the Flight book series about people involved in Canadian aviation. 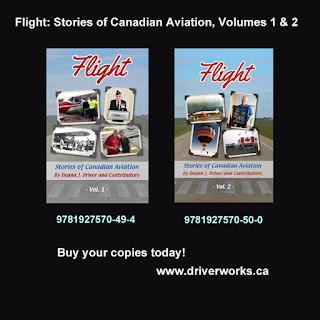 I agree that this man's stories are fascinating and worthy of recording and publishing in my book series. But that's not the cool thing that happened today...

The gentleman I spoke with is Harry Driver. Yes. Driver. Same last name as mine. No relation to my family as far as I know.
Or is there?
Although we've never met and never spoken before, Harry joked that he says this about me: "At least we have one talented person in our family!"
I laughed and replied that I only joined the Driver family by marriage (45 years ago), but I will gladly accept his compliment.
Then Harry and I talked a little about our respective Driver family histories.
Harry's family story is one of three Driver brothers - Charlie, Art and Fred - who came to Canada from England. A fourth brother died in the war.
My late husband Al's grandfather also came to Canada from England. I joked that we might be related. I told Harry a story about how Al and I watched an episode of the TV show "Who Do You Think You Are" many years ago in which actress Minnie Driver was searching for her family's roots.
Near the end of that show, a photo popped up on the TV screen showing a man who was related to Minnie. My husband Al quickly stopped the TV recording we were watching and ran from the room. He came back in carrying a photo of what I swear was the same man - or perhaps a twin of the man on the TV screen! This man in the photo Al was holding was a relative of his grandfather, I think, but we were never able to corroborate that because Al's father had passed away and his mother was unable to verify the details.
Al and I mused about possibly being related to a celebrity and then carried on with our lives. We never got around to searching his family's genealogy.
After speaking with Harry Driver of B.C. about the gentleman he thinks I should interview - Doc Payne - I typed up a few notes about our conversation plus what we agreed were the next steps in the process of getting this story for Volume 3 or 4 of the Flight book.
As I was typing, it hit me - Art!
One of Harry's relatives was Art Driver! Al's grandfather was Arthur Driver!
I grabbed our children's baby books to find our family tree details. Arthur Driver of our family came from a different community in England - three hours north of where Harry's family originated. Is there a connection? Could they be from the same family? Or is it fluke? Or a coincidence? Or just a happy conversation about possibilities?
As a follow-up to our conversation, Harry kindly sent me a family history that one of his cousins compiled. His family's Arthur is not from my family's direct line, but their Arthur and his two brothers served in the First World War at Vimy Ridge and Passchendaele (Al's grandfather also served) and they all returned to homestead in Saskatchewan. A small world indeed.
After our conversation, Harry invited his family historian cousin to share some of her research with me.
I then received a detailed email from Harry's cousin Mary, who included some letters she received from Driver families in Saskatchewan whom she contacted in 1978 when researching her family's history.
Among them was a nice surprise - a letter in my late father-in-law's handwriting as he stated "I DO NOT KNOW IF WE ARE RELATED. THE ONLY INFORMATION I HAVE REGARDING MY ANCESTRY GOES BACK TO MY GRANDPARENTS." (Dad always wrote in beautifully sculpted capital letters.) He then relayed information about his family's background - which at first glance appears to not be from the same family tree, but Mary explained that "Driver" is a common name in England and if I can trace my husband's family back to a certain town in England, there is a possibility that we are relatives.
Mary then went on to tell me another connection to me or, more specifically, my work as an author and book publisher. Mary lived in southern Saskatchewan before moving to British Columbia. Her father's cousin is related to Graham Warner. "I am familiar with your book Never Leave Your Wingman and the story of Dionne's brave struggle with cancer. I was sorry to hear of her passing recently. What a legacy she left!" 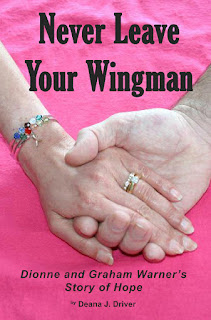 It's been a wonderful series of communications that began with a possible story for the next volume of the Flight book and our conversations are only beginning. I've invited myself to visit these Drivers in B.C. the next time I am in that region visiting my sister.
It seems fitting that the last word should go to my new friend and possible relative many times removed, Mary Driver, formerly of Saskatchewan: "It is a small world, isn't it?"
Posted by DriverWorks Ink at 5:16 PM