Remembrance - Bob and Sue Elliott and their Little Coat

They were unsung Canadian and Dutch heroes of a sort. Until Alan’s book, of course, which helped thousands of readers worldwide learn their names and something about the sacrifices made by them and people like them who served in and/or lived through the combat zones of the Second World War. 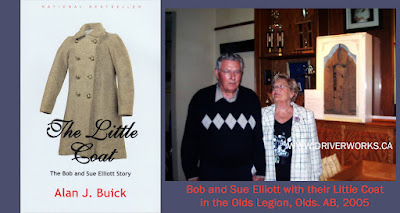 Bob enlisted in the Canadian Army in Calgary when he was only 15 years old. My oldest grandson is close to that age now and I can’t imagine the fear and worry of being unable to do anything but watch that young man go off to war as Bob did, having told recruiters that he was 20 years old and wanted to follow in the footsteps of his older brothers.

By age 19, Bob Elliott was a tank commander in the Canadian Army and was fighting the German army in the Netherlands. There, he met a feisty, 10-year-old Dutch girl named Everdina “Sussie” Cretier. Sussie had earlier saved her father from a German firing squad and their whole family had just escaped to the safety of the Canadian army after running across a field dotted with landmines.

Sussie - soon known as Sue - became a good-luck charm for the Canadian soldiers, especially those in Bob’s troop, who wanted to give her a Christmas gift. On Christmas Day 1944, Bob presented Sue with a child’s coat that the soldiers had asked a local seamstress to sew out of a wool Canadian Army blanket. The buttons on the coat came from the soldiers’ tunics.

Sue cherished that gift and kept it for decades, long after she and Bob reconnected and she moved to Canada to be with him. Alan Buick saw the coat on display at the Royal Canadian Legion in Olds, Alberta, and began asking questions about it - which led him to write his award-winning book, The Little Coat.

Bob Elliott passed away in February 2013.

We learned today that Sue Elliott passed away in May of this year. We express our heartfelt condolences to their families and all who loved them.

I was privileged to meet and talk with Sue and Bob during our launch of The Little Coat book from the Royal Canadian Legion hall in Olds, Alberta in November 2009. They connected with us by video, long before that became an everyday occurrence. Alan Buick and I were thrilled that the subjects of Alan's book could participate in our launch and visit with their family members and friends in the audience via video chat.

In 2013, I was thrilled to meet Sue in person in the Netherlands, when I travelled there on a vacation with my late husband, Al. I wrote a blog about that adventure, from the perspective of the book talking to us. It was great fun and Sue was, as always, energetic and full of laughter.

Bob and Sue’s story and sacrifices will never be forgotten. Nor will those of thousands of others who served and placed themselves in danger in the name of freedom.

We will remember them. Rest in peace, dear friends. 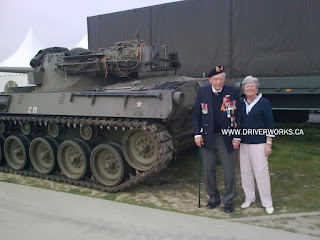 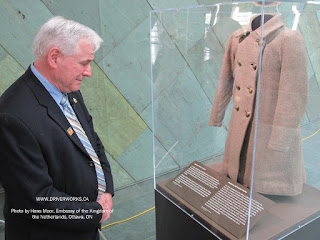 More of my blog posts about Bob and Sue Elliott:

From Blanket to Coat to Book to Painting, June 2013