Who likes a good book? 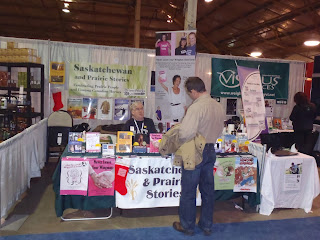 We met many fascinating, avid readers this past week at our Canadian Western Agribition trade show booth.

Here's a small sample of the comments we received:
- "There's nothing better than books."
- "I got a good recommendation of your work from the used bookstore in the Value Village Mall. She said they can't keep them in there." (It's great that people are enjoying our books - new or used.)
- "I've read Never Leave Your Wingman, Never Give Up, Just a Bunch of Farmers, My Zayde, The Little Coat and Prairie Pilot. I only read true stories. I see there are a couple of books here on your leaflet that I haven't read. I'm going to go sit down and read this and see what they are about."
- "I'm writing a book right now. Can I contact you to get some advice and talk about publishing it?" (Yes, of course!)
- "I bought Running of the Buffalo and my 13-year-old read it cover to cover. He laughed his pants off!" 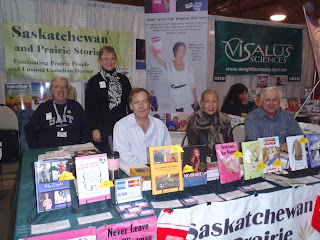 Winter! Time for a good book!

With the first major snowfall of this winter, many Prairie people wonder about driving conditions and getting safely from Point A to Point B. Having been born and raised on the Prairies - I on a farm north of Edmonton AB and Al in the city of Regina SK - we know it's been done before and will continue to get done, so we aren't that worried about it. The thoughts we are interested in are the happy ones that revolve around beautiful snow-covered trees, frost-tinted windows, sparkling colourful Christmas lights and what to buy for friends and family this Christmas. May we suggest some books?
Our most popular titles this fall (available from www.driverworks.ca) are:

Never Leave Your Wingman: Dionne and Graham Warner's Story of Hope by Deana J. Driver - The true story of Dionne Warner, a fun-loving seven-time cancer survivor, and her devoted humour-filled husband Graham, who dance their way into Dionne's weekly chemo treatments in Regina, Saskatchewan – in costume – bringing laughter and hope to everyone they meet. This is an inspiring unforgettable story and a lesson in love. ($24.95 )

The Little Coat: The Bob and Sue Elliott Story by Alan J. Buick - The true story of 19-year-old Bob Elliott, an Alberta soldier who fought the Nazis during the Second World War, and Sussie Elliott, a feisty 10-year-old Dutch girl who became a good-luck charm to the Canadian soldiers fighting at the Maas River. An army-style coat the soldiers gave to little Sussie for Christmas 1944 was the start of a lifelong love between Bob and Sue. This story will melt your heart this Christmas. ($19.95)

Letters to Jennifer: From Maudie & Oliver by Sharon Gray - The daily antics of two precocious but worldly Siamese cats are captured in 56 amusing and clever letters written by Winnipeg author Sharon Gray as a way to keep in touch with Jennifer, a friend undergoing chemotherapy for breast cancer. Whether basking in the sunlight on the kitchen windowsill, falling off the TV set during a nap, or having a 'family meeting' to set their LIP (Live-In Person) straight on the rules of the house, Maudie and Oliver's unique cat's-eye view of the world with entertain and delight readers. ($16.95)

Running of the Buffalo by Ron Petrie - As a humour columnist for the Regina Leader-Post, Ron Petrie has pondered many topics including: Can one actually lose weight on the mini Oh Henry chocolate bar diet? Is it gotch or gitch? Can a man actually change the diapers of three squirming babies on the same night? And why is it that some farm boys never learn French? A 'bathroom' reader that will add some giggles and guffaws to your Christmas season. ($19.95) 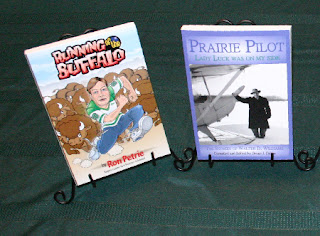 Prairie Pilot: Lady Luck was on My Side; The Stories of Walter D. Williams; Compiled and Edited by Deana J. Driver - Walter Williams was an unofficial air ambulance pilot and a flying taxi service to dozens of families and individuals in west central Saskatchewan and east central Alberta in the 1950s. A welder by trade, Walter began answering calls of distress as soon as he got his little two-seater Aeronca plane. Taking chances and ignoring common sense, Walter flew in snowstorms and landed in farmers' fields to transport pregnant women, injured children, RCMP, teachers, doctors, criminals and thrill-seekers. ($21.95) 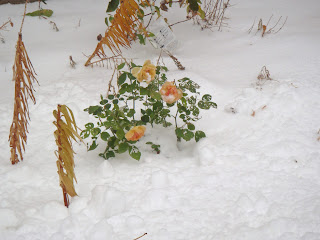 Posted by Deana Driver at 11:42 AM No comments:

Mourning the death of a Prairie pioneer

Art Mainil, a feisty, determined southeast Saskatchewan farmer, has passed away after a battle with cancer . Mainil was the main man behind the creation of the Weyburn Inland Terminal, the first independent farmer-owned-and-operated inland grain terminal in Canada in 1976.

I had the pleasure of interviewing him in 2001 when WIT commissioned me to write a book about their first 25 years as an organization. Just A Bunch of Farmers: The Story of Weyburn Inland Terminal 1976-2001 was my first book and it was a wonderful process interviewing and working with these men who changed the way that all Canadian farmers are paid for their grain.

WIT started in 1974 as an idea to improve the country's grain-handling system. By 2001, "just a bunch of farmers" (as they called themselves when they got in trouble with the bank or needed an out - "What do we know? We're just a bunch of farmers?") had worked through tough and prosperous times and become very successful. WIT had racked up an impressive list of 14 'firsts' including being the first grain elevator to do protein testing on grain and pay farmers for the protein content of their grain, the first to offer custom drying, and the first to pay farmers for the foreign material and refuse in grain.

By 2001, Art Mainil had long been away from WIT operations, but he was still committed to the terminal and graciously agreed to talk with me about the start of WIT. I arrived at his farm and was greeted by a man of my height who appeared tough and a little gruff but hard-working, principled and certain of what should be happening in Canadian agriculture and how he could make that happen. Art reminded me very much of my father, a tough little Ukrainian farmer, and we shared a laugh when I told him that.

Art was quick to not accept credit for being the instigator of the creation of WIT. He and other farmers had long been talking about how to improve the system and Art had wondered, after doing some custom-combining in the U.S. and seeing inland terminals there, why there couldn't be such a thing in Saskatchewan. Clarence (Clare) Taylor and Glen McEwen, other farmers who became WIT directors, were two of many men I interviewed who gave Mainil credit where credit was due.

"We would have never had the terminal if it hadn't been for Art," said Taylor.

"You couldn't help but catch his fever," said McEwen. "It was something that needed to be done because nobody else was doing it."

WIT is in its 35th year of operation and will be inducted into the Saskatchewan Business Hall of Fame later this month.

Rest in peace, Art Mainil. You were a man ahead of your time. You will be missed. 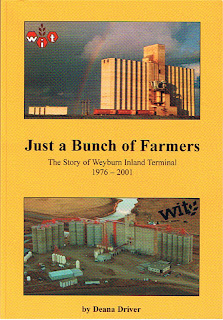 Posted by Deana Driver at 6:27 PM No comments:

We've been asked from time to time (probably one out of every 60 or so people that we meet), whether our books are available as e-books. Our response is, "Not yet, but we're looking into it."

The world of book publishing is changing daily, especially that of e-book publishing - as evidenced by today's big announcement that (Chapters) Indigo Books & Music Inc. has sold its Kobo e-reader business to Rakuten Inc, one of the world's largest e-commerce companies, for $315 million.

For the past year, we've been considering taking a few of our book titles and creating digital files for e-readers. We were waiting for the industry standards to settle down a bit. This spring, we thought that epub was chosen as the standard format to use, then we found out it isn't necessarily so. The costs of translating a manuscript into one that is available via an electronic reader device is not as costly as it once was, but it takes time and skill and money that could be used for other things - like producing more physical books. The problems relate more to informing readers of your e-book, marketing and selling online, making sure the information is accurately translated to the new format, and keeping up with the latest technology. Whew! It sounds exhausting and a little overwhelming for a small publishing house like ours - but we aren't dismissing it altogether.

At a recent meeting of the Saskatchewan Publishers Group, we were given advice by a fellow publisher who told us not to worry about the swarm of new e-technology - which can feel like an army of soldiers on horseback coming at us. He suggested, "Just pick a horse and get on it."

So we're carefully wandering around the horse barns now, looking for the most sturdy, reliable animal. Once we've found the right one, we'll carefully jump onto its back and see where it leads us. 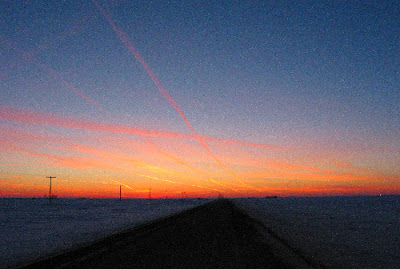 We're on our way to Assiniboia, Saskatchewan, for the Mistletoe craft and trade show tonight and tomorrow! These shows provide us with great opportunities to meet the people who buy our books and to chat with folks who don't yet know about our Saskatchewan and Prairie stories. We always come back wtih some fun comments and compliments, and we add more stories to our collection of memories about the people of this province. Have a fun weekend, everyone! It might be the last one before it snows!
Posted by Deana Driver at 11:24 AM No comments:

I will never tire of sitting beside Dionne Warner as she carefully listens and talks to people about their cancer stories. On Tuesday, at the Pasqua Hospital's gift shop in Regina, we were privileged to chat with some of the nicest people, who shared their struggles and successes, laughs, tears and hugs with us.


It was a very special day and I have no doubt that Dionne has given a whole new group of people - the Tuesday chemo patients and their families - another spark of hope to take with them on their journey. 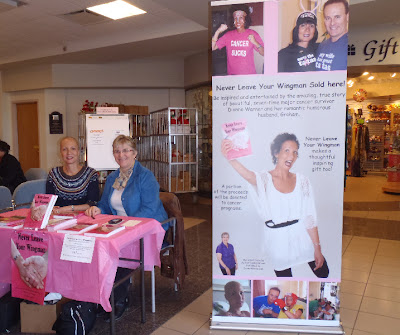 Posted by Deana Driver at 3:19 PM No comments: