Seven-time cancer survivor is in remission!!!

In December 2009, Saskatchewan resident Dionne Warner was diagnosed with Stage IV cancer in her liver, lungs and bones. These were her fifth, sixth and seventh cancer diagnoses since 1995. She'd already overcome breast, brain and two bouts of liver cancer. But strong, beautiful, fun-loving Dionne did not let this news destroy her sense of humour or her incredible will to live.

Dionne went into her first chemotherapy treatment in December 2009 with attitude! After volunteering for the Allan Blair Cancer Centre in Regina for the previous seven years, sharing her story of survival and hope with patients and their families, Dionne decided she had to continue to share that message even though she was now a patient again. She put on a 'Cancer Sucks' T-shirt, some white war paint and became the Pink Warrior, morphing into Warner Warrior 'D' as time when on. 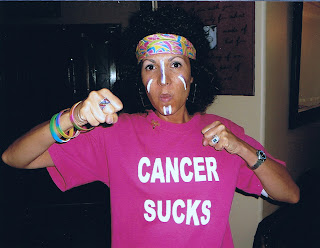 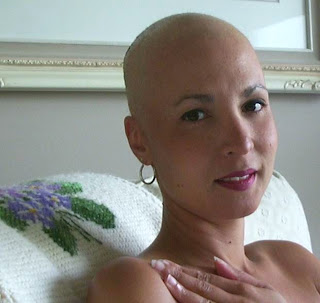 Within a few treatments, she added costumes for Graham as well to her weekly chemo treatment 'themes' and the two of them began dancing into chemo to bring hope and laughter to everyone they met.
By December 2011, Dionne and Graham had presented 77 different themes and brought hope to hundreds of patients and supporters - through their volunteering in the community and with the help of our book Never Leave Your Wingman: Dionne and Graham Warner's Story of Hope by Deana J. Driver. Buy the Never Leave Your Wingman book! 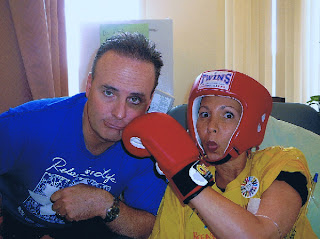 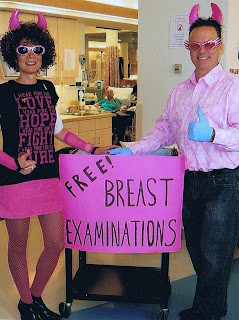 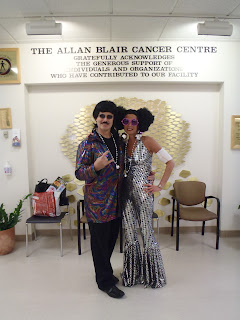 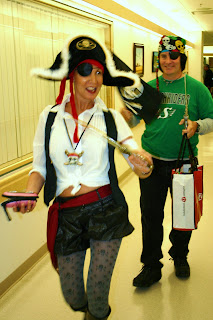 Shortly after Graham wooed Dionne to Regina from Toronto in 2001, she was diagnosed with liver cancer. They were engaged to be married, but Dionne told Graham he did not have to marry her now that she was sick again - she would return to her family and oncologists in Ontario and he could carry on with his life. An experienced pilot, Graham quickly replied: "You never leave your wingman."

He has been by her side ever since and they have fought these cancer battles together, with all the courage and gusto befitting world-class champions!

Immediately after Dionne's Stage IV diagnosis in 2009, Graham began researching options for treatment besides the chemotherapy that Dionne would need. They visited a doctor of natural medicine in Regina and were given information about a clinic in Tijuana, Mexico where Dionne could receive complementary treatment that involved a special diet and heating her blood to kill cancer cells. They travelled to Mexico twice and kept Dionne on a special diet along with natural supplements and chemotherapy treatments throughout the past two years.

In December 2010, Dionne was taken off chemotherapy for eight weeks - to give her body a break and to be able to take a PET scan (positron emission tomography) which is more detailed than a CT scan in finding cancer cells.

On January 24, 2011, her oncologist told her the PET scan results. There are NO CANCER CELLS anywhere! She is in remission!!! Read the Regina Leader-Post.article on this walking miracle!

So, in the spirit of never-ending hope, we celebrate this wonderful news about this amazing, incredible woman and her never-failing wingman ....

Cancer can be beaten! Together, we can win this battle!  Woo Hoo!!!

Along with Dionne, Graham and their friend Crystal - It's Time To Dance!!!

P.S. Dec. 2014 update - In April 2012, Dionne went back to her volunteering at the Allan Blair Cancer Centre in Regina, Saskatchewan, Canada. Unfortunately, in August 2012, cancer was detected in her liver. This was the fourth liver cancer diagnosis for her. Dionne was signing Never Leave Your Wingman books with me at the hospital gift shop the very next day. She had not even given herself a full 24 hours this time to let the diagnosis sink in. Her immediate reaction this time was: “It’s only one cancer this time, not four. They did not say ‘Stage 4’, and it’s not in my brain – so bring it on!” She has been in treatment since then. By August 2014, her tumours had shrunk by 35% and then a further 40%.` Way to go, Dionne!
You might also enjoy this November 2014 blog post about a recent cancer awareness campaign at which Dionne was centre stage.
Posted by Deana Driver at 9:28 AM