A little more than three years ago, I met an astonishing woman. A seven-time cancer survivor who was in the battle of her life, fighting Stage IV liver, lung and bone cancer. Her name is Dionne Warner. 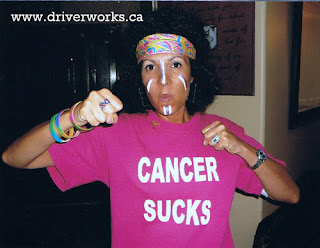 Yes, this is the Dionne I met in June 2010 and this is who she continues to be today - a fighter.

Dionne had already overcome breast cancer, brain cancer and two bouts of liver cancer before I met her. To help her get through her liver cancers, she had an amazing wingman - her fiance-turned husband Graham - at her side. Graham had just wooed Dionne from Toronto, Ontario to Saskatchewan when she was diagnosed with her first liver cancer in 2001. She and Graham were engaged and Dionne told him he did not have to marry her - she would return to Ontario to her family and her doctors. Graham is a Regina businessman and an avid pilot. He quickly replied: "You never leave your wingman." Dionne happily stayed in Saskatchewan with Graham and they have since battled her cancers together. And the rest, as they say, is wonderful, happy history.

Dionne went on to volunteer at the Allan Blair Cancer Centre in Regina for seven years, sharing with patients and staff her own personal story of hope, courage and joy. She raised more than $50,000 for cancer research by selling bracelets, rings, and other cancer awareness items. She also raised thousands of spirits in the process. Dionne will tell you that talking with other cancer patients helps keep her strong and how, when she meets a 25-year cancer survivor, it gives her a goal in her own journey with this disease.

The photo above was taken just after Dionne was diagnosed in December 2009 with Stage IV liver, lung and bone cancer. Because she had spent so many years spreading her infectious laughter and hope with other patients of the Allan Blair Cancer Centre, Dionne decided she could not go into her own chemotherapy treatments as a 'normal' patient. She put on a pink 'CANCER SUCKS' T-shirt and a bit of war paint and went in as the Warner Warrior, ready to do battle with this evil disease.

That costume led to more than 75 different themes over the next two years, with Dionne and Graham both dressing in costume and often dancing into the chemo unit, bringing hope and laughter to patients and staff alike. These are a few of my favourite themes: 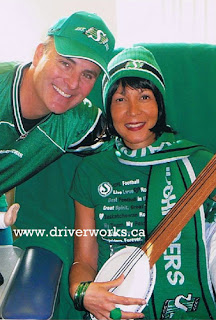 The Banjo Bowl theme - where they made their own banjo. 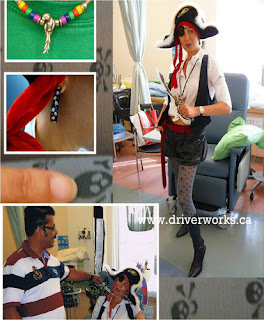 The Saskatchewan Pirate theme - complete with necklace, earrings, and an oncologist willing to cut that nasty cancer out of the patient. 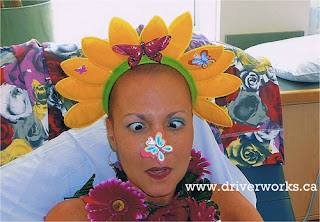 The Spring theme - with Dionne's typical silly sense of humour. 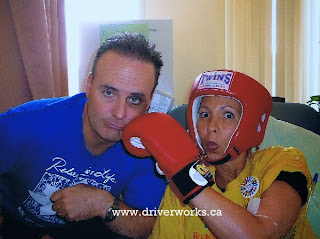 And Relay For Life, for which the theme that year was 'Fight Back'.

Oh - I should mention that Dionne's husband Graham also has a healthy sense of humour. He is quick to tell jokes, tease and make fun of himself and others - all in the course of a normal day. Dionne has a contagious laugh and Graham loves to spark and share in that laughter. They're a match made in heaven.

In June 2010, I met Dionne after my daughter Lisa introduced me to Dionne's story. 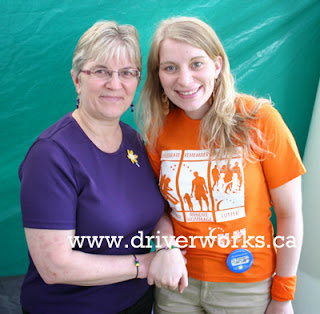 Lisa was a volunteer with the Relay For Life committee in Regina and was excited that Dionne was to be the guest speaker at that year's Relay. (Lisa is above in the orange Relay Committee T-shirt.) Lisa told me about how Dionne was fighting cancer by dressing in costume and dancing her way into chemo and how Graham was writing My Beautiful Dionne Update emails after each treatment to inform friends and family about Dionne's cancer treatments, her ongoing health and other events in their lives.

So, to make a long story short, Lisa told Dionne I'd like to talk to her about writing a book on her incredible story, so Dionne phoned me a few days later. I met her and Graham, we became instant friends and that was that. I began following them to different places... like chemo... 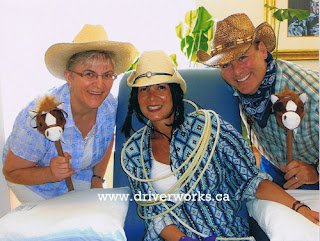 ...where they dressed up and danced in to the song Save A Horse - Ride A Cowboy. I borrowed some of Dionne's extra props - a hat and a horse - to take part in this fun theme. 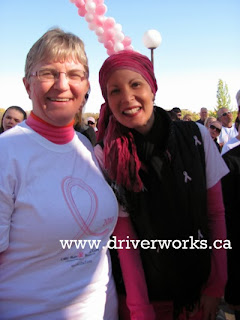 I visited with Dionne at the CIBC Run for the Cure in October 2010, where my family walked the course after we listened to Dionne address the crowd and share her story of hope. 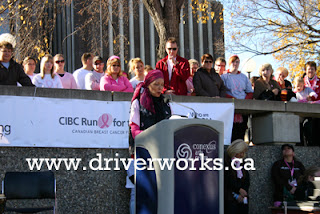 I'll never forget the sad faces in the audience and how they cheered for her a little too early - after she said she'd been in remission for seven years, but just before she told them of her Stage IV diagnosis. I felt bad for her listeners, but happy that Dionne could share her message and give all the Run participants a sense of her courageous spirit and endless zest for life.

I was invited to Dionne’s birthday supper - her birthday is October 7th - a couple months after I met the Warners, so I could meet some of their friends and take this photo of these two awesome people. (Do you like the Foxy Roxy wig? It’s one of Dionne's favourites.)

And this is one of the funniest themes I attended. So much so that I devoted an entire page of the 32 pages of colour photographs in the book to it. 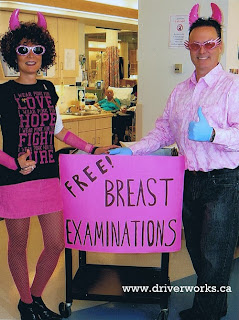 While Dionne was getting her own chemo treatment that day, Graham (with his wife's permission) wheeled this cart up and down the chemo unit, offering this ‘free service’ to everyone. Happily for all (except maybe Graham), there were no takers for his offer, but there were lots of laughs!

In June 2010, I promised Dionne and Graham that I would have a book completed and ready a year later, for launch at the 2011 Relay For Life in Regina. I accomplished that self-imposed deadline and could hardly wait to see their response to the book. 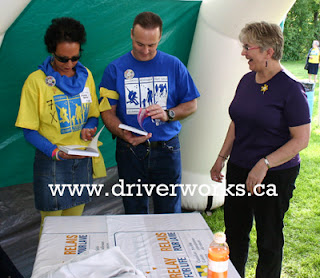 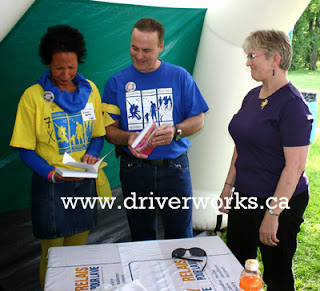 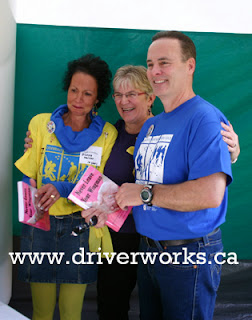 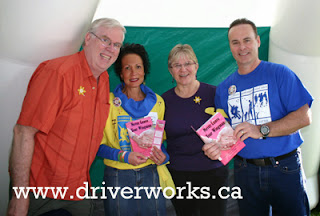 My husband Al and I (partners in DriverWorks Ink publishing) were and are happy to have published this inspiring love story about this strong, beautiful, fun-loving warrior and her strong, handsome, fun-loving wingman.

Since the book was released in 2011 and reprinted in 2012, Dionne and I have been together numerous times (with or without our wingmen)... 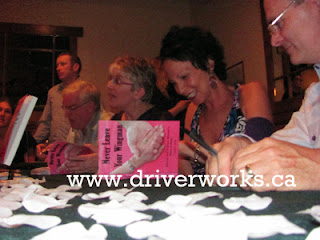 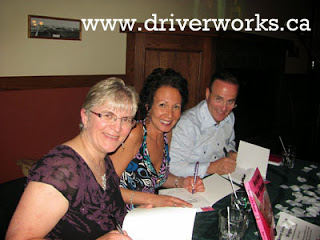 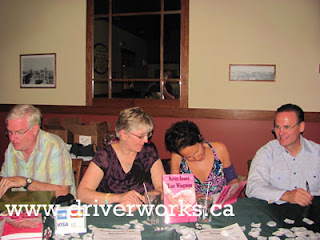 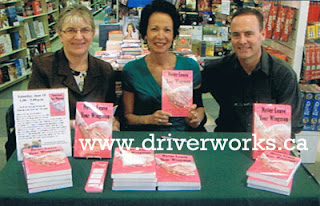 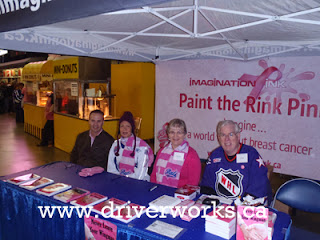 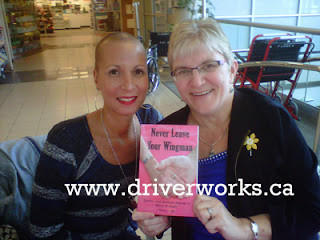 ...at numerous speaking events and fundraisers... 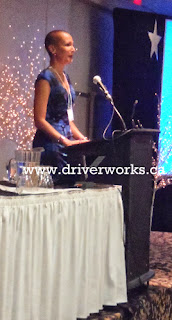 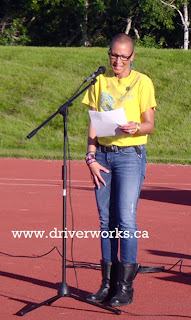 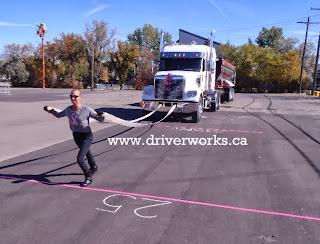 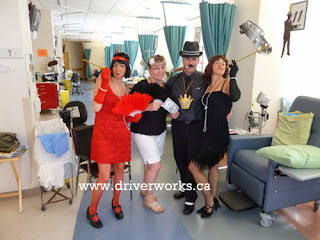 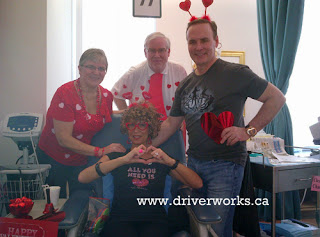 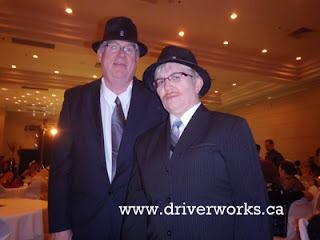 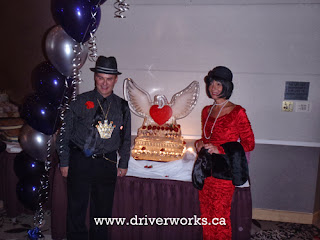 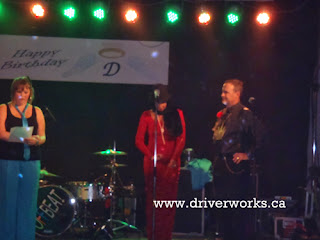 This was Dionne’s birthday party in 2012 - a huge surprise that her wingman pulled off successfully. And we all had a blast dressing to the Roaring 20's theme.

At that party, Dionne said she didn't know if she would be around for her next birthday, on October 7, 2013 ... But who does know their future, really?

We are beyond pleased that she is still here, alive and dancing, and still showing cancer who's boss! She's still inspiring everyone she meets - and everyone who reads our book - and she's still making me laugh every single time we get together or talk.

So here’s to you - vibrant, charismatic, caring, beautiful Dionne Warner.

Here’s to many more years of happy, inspiring, fun-filled life for you with your wingman by your side.

Have the happiest birthday ever!

And, as only you can say with real feeling... 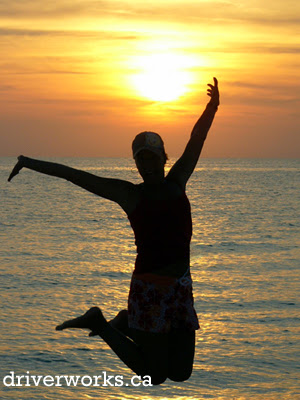