Hello there. It's been almost four months since I came home from my wonderful European vacation and I still can't believe I WAS IN EUROPE THIS SUMMER! Oh my gosh, it was incredible! But then again, you may be having a little trouble believing that I am writing a blog about my adventures there, too. I am a book, after all - the Never Leave Your Wingman book - about a seven-time cancer survivor who dresses in costume and dances into her chemo treatments, to be exact. What can I say about my going to Europe and writing about it - my author and her husband (Publisher Al) have fun imaginations and thought it would be fun to take me along on their first-ever European vacation. (Read my first blog.)

So here we are in Holland, near the end of our vacation in which we have already seen parts of seven countries. We are leaving the beautiful town of Groesbeek, Netherlands, heading for the big city - Amsterdam, to be exact. But first, we visited a friend in another Dutch town and enjoyed a popular Dutch meal which they call pancakes. In Canada, we would call them crepes. No matter what they're called, these were pretty darn tasty. 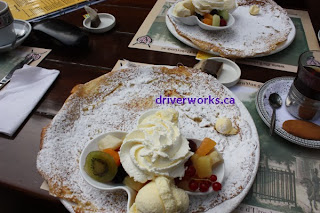 You can get Dutch pancakes with bacon and egg toppings, pizza-like toppings, omelette-style... pretty much any kind you can imagine... but my publishers had fruit with their pancakes. Whipped cream, too - 'cause there wasn't enough sugar on the pancakes. Good thing they spent most of our vacation walking to work off all those calories. Sheesh!

And as we were walking back to our car, we saw this wonderful sight... 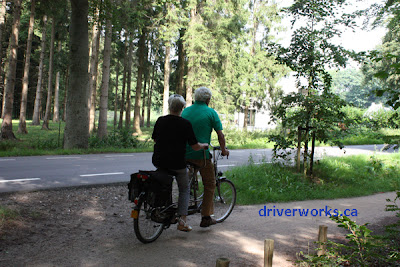 ...a bicycle built for two, riding along this bike path through a splendid forest.
I could live in Holland. For sure. So beautiful. And the green of the trees would nicely complement the beauty of my pink cover, don't you think?

Ahem.... Sorry about that. I don't usually get so full of myself. Must be the sugar buzz from the pancakes.

So let's get back to our trip. It's on to Amsterdam. 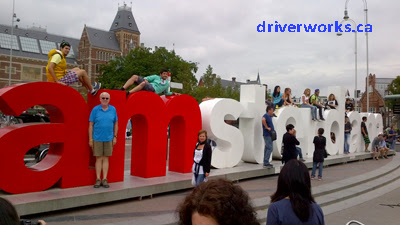 Amsterdam is a beautiful, unique, fascinating city. We saw many interesting sights, so hold on to your hat or whatever else is close by as we take you on a photo journey with us. 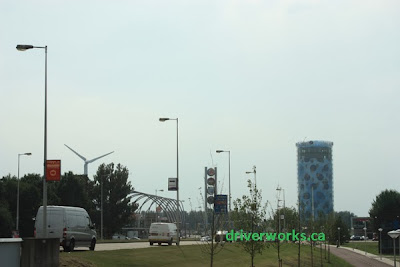 This is the strangest, most unique hotel we've ever seen. Yes, that's it - the thing on the right that looks like a giant pop can. It's called the Fletcher Hotel, and it is designed in a circular pattern. 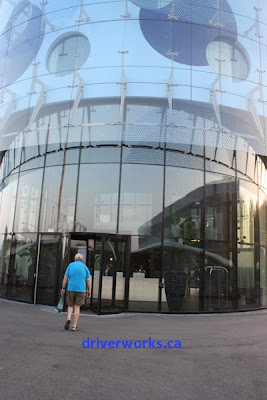 The building and windows are circular, 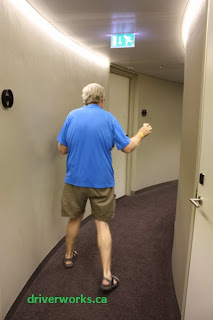 ...the hallways are circular - which is a little disorienting for we who are used to Canada's flat prairies - but the most unusual feature of this hotel is the circular shower... 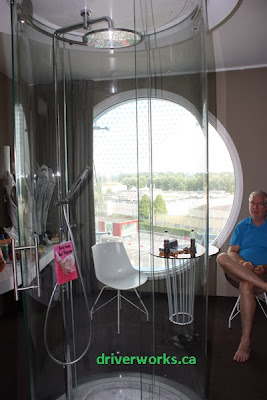 ...in the MIDDLE of the hotel room!
Yes, there I am, balancing on the shower door handle while Publisher Al sits at a chair by the window, just watching and wondering what on earth we will see next in Amsterdam.

Well, he didn't have to wait long before we saw... 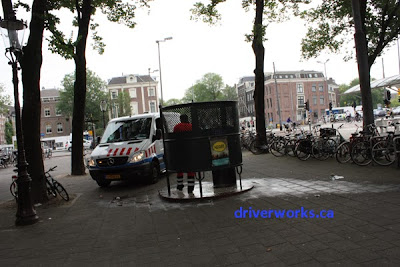 ...our first outdoor urinal. On the street. In front of God and everyone!
The man inside this urinal is actually a maintenance employee who was cleaning the urinal. Good thing, too. Some of the outdoor urinals we passed were downright nasty. Later on, we did see another man entering another street urinal in the Red Light District. We just kept walking. Enough said about that.

So on to Amsterdam's beauty. 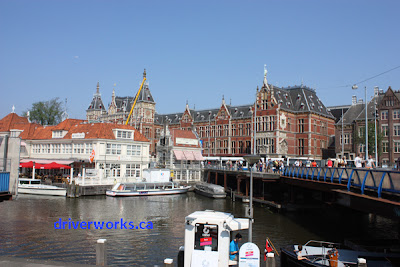 The main train station downtown (on the right) is a gorgeous old building. As we wandered toward it, we heard a commotion behind us.

We turned around and saw... 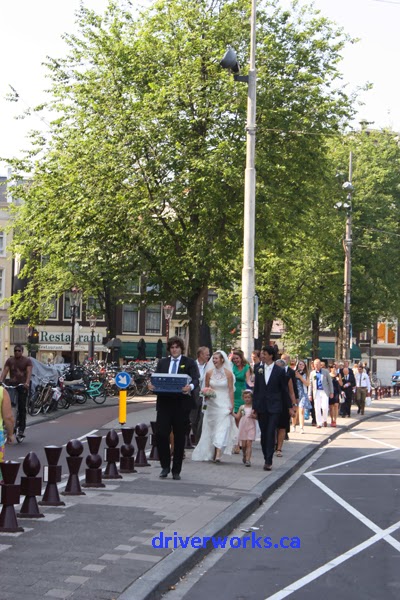 - a bridal party making its way to the train station!
Just another neat experience for us in Europe.


We enjoyed a canal tour and learned that Amsterdam was built like an onion - one layer at a time - and has become a model for all other cities, including New York - which used to be called New Amsterdam.  I did not know that, so there you go - you can learn something new every day. But then again, I am a book and someone has to read me and read to me.

Anyway, we saw some beautiful canals, amazing old buildings, interesting architecture and fascinating sights as we floated down the river and walked through the streets of this wonderful city. 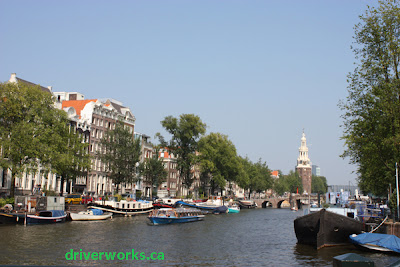 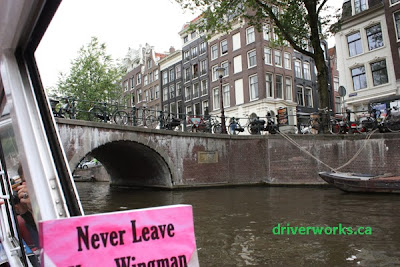 Bicycles are everywhere, including on the sidewalks... 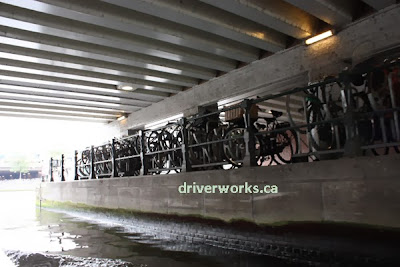 ..and parked under the canal bridges. "It's important to remember where you parked yours," said our tour guide. There are 600,000 bikes in Amsterdam at any one time - in a city with about 725,000 people and another two million in the area. 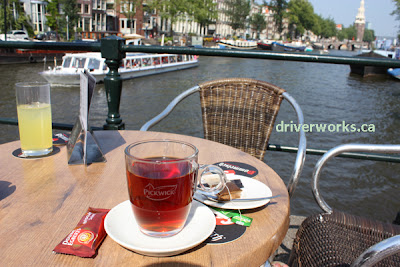 We watched the water traffic as we sipped our tea and juice at a small café. We found that drinks are often served only partially filled in the Netherlands. Our Dutch friend told us that when that happens, the locals often ask for a ladder - so they can use it to get the drink to the top of the cup! We didn't want to be rude, so we didn't ask for a ladder, but we sure thought about it when this cup of tea was delivered! 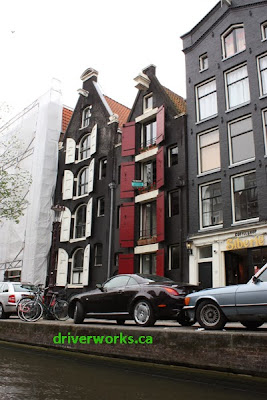 We loved seeing the variety of shapes and sizes of buildings here. 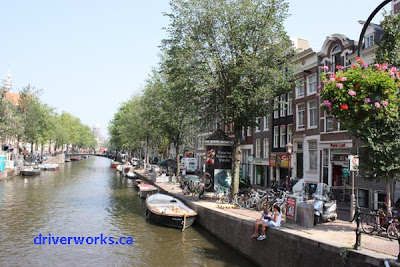 This is how you get around in Amsterdam - 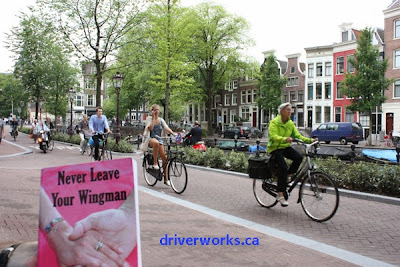 - by bike, on foot, by boat, motorcycle and car - all within a few metres of each other. 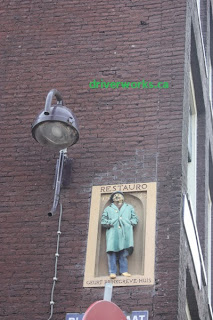 'Gable stones' like this one tell people something about those who lived in these buildings at one time. 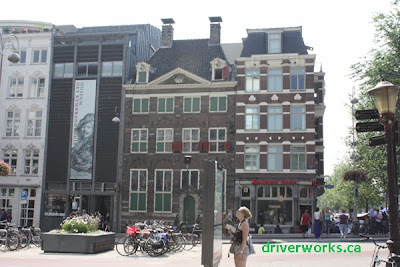 Rembrandt Corner includes a café and the museum in the house where the famous Dutch painter Rembrandt lived. 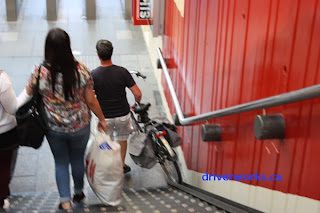 On the Canadian Prairies, we don't have subways and train stations, and we certainly don't have rails like this to help us get our bicycles down the stairs and onto the street to ride the rest of the way home. Cool. 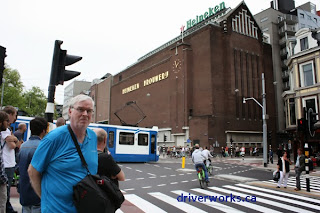 We have beer, but not a Heineken brewery in our hometown. 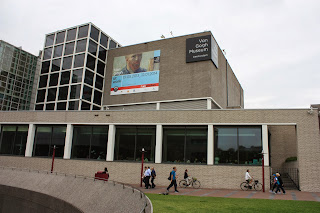 Nor do we have the incredible Van Gogh Museum, where we saw so many of his amazing paintings ... 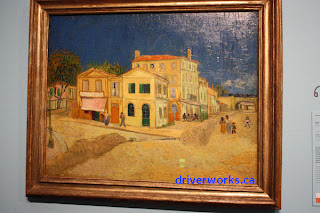 ...including the yellow house where he lived and worked on his art in 1888.

So with these final images of Amsterdam... 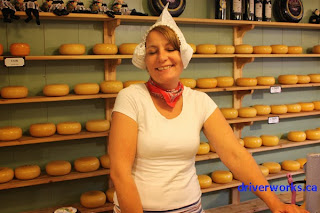 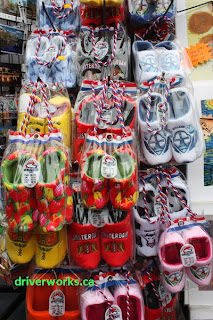 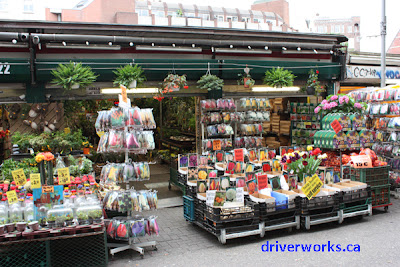 and the flower markets, 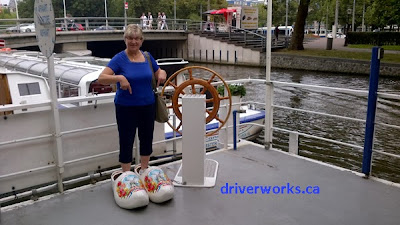 my author found that Amsterdam left some very large shoes for other European cities to fill.
Silly author.
As for me, I'm tired from all that walking, so I'm going to sleep. 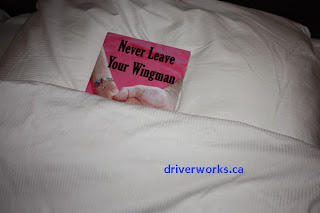