In celebrating the 10-year anniversary of the 2010 Paralympic Games, I have been thinking about the events I witnessed and the emotions I felt as a spectator at cross-country skiing races and as a book publisher launching an inspiring new book there.

I realized that I learned five lessons which relate to this present time of self-isolating and reducing the spread of COVID-19.


At the Paralympic Games, the spirit of caring for all humanity was obvious during every moment of my time there. It’s what we need to practice now too.

The first lesson is to Look After The Most Vulnerable.

Saskatchewan Paralympian Colette Bourgonje was 48 years old, more than double the age of some of her competitors at the 2010 Paralympic Games. Her age was often brought up in conversations and interviews but, at the end of the day, it did not stop Colette from competing in her cross-country sit-ski races.

If we see our race as our attempt to “Flatten The Curve” of the spread of COVID-19, we must all stand on that starting line – two metres away from each other, if you’re imagining it as a physical race. No matter our age or any other factor about our physical selves or lives, we must all work hard toward our goal of reducing the spread of this disease. Do not let anyone stop you from working toward this.

While we can be grateful that most children who have been infected have had only mild symptoms akin to a cold or flu, humans of all ages can spread the virus. This virus is such that we may not even know we are infected, so let's please all do our part and run this race from the comfort of your own homes until our governments and health authorities tell us it’s safe to return to our previous lives.

In 1980, Colette Bourgonje was about to graduate from Grade 12 in Porcupine Plain, Saskatchewan. She’d won many athletic awards and was hoping to become a physical education teacher and an Olympic runner. Instead, she became a paraplegic after she was injured in a car crash near the end of the school year.

She did not let this sudden turn of events stop her. She went on to become the first student with a physical disability to enroll in the College of Physical Education at the University of Saskatchewan and the first such student to graduate from the College. She was the first female student in a wheelchair to graduate from a physical education program at any university in Canada and the first Canadian to win a Winter Paralympic medal on home snow – at the 2010 Games in Whistler.

I arrived at the 2010 Games the day after Colette won that first medal for Canada – a silver in the women’s 10-kilometre sit-ski race. I was thrilled to watch the presentation of that medal in the evening. 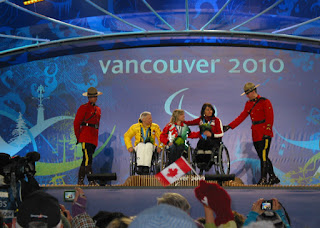 I was also privileged to watch Colette compete in the women’s 5-kilometre cross-country race. As the competitors made their way over the track into the woods, a large screen showed the parts of the trail that were hidden from spectators.

I held my breath when it was announced that Colette had fallen over on her sit-skis. I remember the vision of her laying on her side in the snow while the race continued. That may have been on the screen or perhaps in my imagination. Either way, it was upsetting.

Was Colette done racing? Would someone have to help her get up and off the track? I should have known better. This was Colette Bourgonje – a strong, independent, fierce woman with a determination she exhibits in everything she attempts.

After what felt like forever but was probably less than a minute, it was reported that Colette had righted herself and was continuing the race. The crowd – especially our Saskatchewan contingent – erupted in cheers. I was amazed, awed and thrilled when we saw Colette racing out of the forest and onto the home track. She finished the race in third place, earning a bronze Paralympic medal. At age 48. After falling.

So don’t give up during this troubling time, people. We may all feel like we have fallen – or been pushed – by this global pandemic. By taking the careful steps prescribed for the safety of ourselves and our communities, we will right ourselves again. And we’ll finish this race too, maybe even gaining new insights into our own lives and actions so we can make our new world better.

Note:  Mary Harelkin Bishop also wrote the children's picture book Gina's Wheels, about a child who met Colette Bourgonje and wondered what it would be like to be in a wheelchair. Order both books from DriverWorks Ink.

Posted by DriverWorks Ink at 10:56 AM