Not just a walk in the park - Protests, suicide awareness, grief, and hope

Over the last couple of weeks, I have taken several walks or bicycle rides in or near Wascana Park, the largest park in my city of Regina, Saskatchewan. The park usually provides me with comfort and a sense of awe over its beauty and tranquility, but the scenes on one day produced many other emotions including frustration, sadness, surprise, confusion, grief, and peacefulness.

I saw a teepee set up to protest the high rates of suicide in Saskatchewan, a group of anti-maskers holding placards, a garden of flowers, a memorial to a man who drowned in the lake, and the colourful signs of autumn. 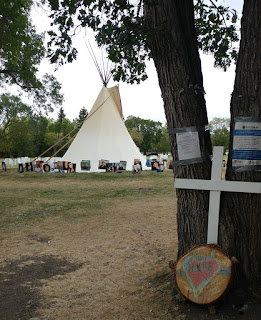 I visited the site where a teepee had been set up across from the provincial legislative building to protest government inaction on high suicide rates among Indigenous persons. I was in awe of the actions of 24-year-old Métis fiddler Tristen Durocher and a supporter, Chris Merasty, who walked 635 kilometres from Air Ronge to Regina to protest the Saskatchewan Party government's decision to vote down a suicide prevention bill put forward by an NDP MLA representing northern Saskatchewan. They began their Walking With Our Angels journey on July 2 and arrived in Regina July 31, where Durocher began a hunger strike and vowed to continue it until meaningful legislation was passed.

More than 40 photos were placed around the teepee when Durocher started his ceremonial fasting - closeups of individuals who had died by suicide. He had invited others to bring photos of their loved ones lost to suicide. There were almost 90 photos surrounding the teepee on September 12th. It was impossible to not be moved by the spectacle of the faces. So much unnecessary loss and pain. I looked at the faces from a distance and paid my respects silently, with a sad and frustrated heart, hoping for change soon. 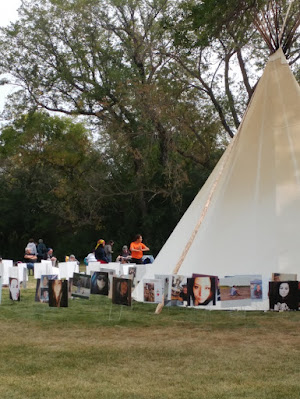 On September 11, a judge had dismissed the provincial government's bid to remove Durocher from the park and allowed him to complete his ceremonial fast and vigil. That judge later visited Durocher at the site, as did numerous individuals from many walks of life, including some politicians and religious leaders. Many discussions were held.

The teepee is gone now, but Tristen's presence on the legislature grounds and his message reached many in this city, this province, and beyond. An online search of his name shows many, many stories of his protest and message. A recent tripartite letter of commitment is a hopeful sign.

As I made my way from the teepee area onto the sidewalk leading to the garden in front of the legislative building, I was taken aback to see a group of people holding signs against mandatory face masking. I was further surprised when one of the woman shouted at me, "We love you!" as I rode by with my face mask on.

I usually wear a mask when I leave my home now - because of my asthma and my desire to keep others safer from any virus or other germs I might unknowingly carry. For a split second, I thought about going back to the protesters to find out what they were thinking, but I decided against it. I was still overwhelmed in thinking about suicide and unnecessary loss of life. I doubted if anything I had to say would change the minds of these anti-maskers. I kept moving - to the garden to enjoy the flowers. 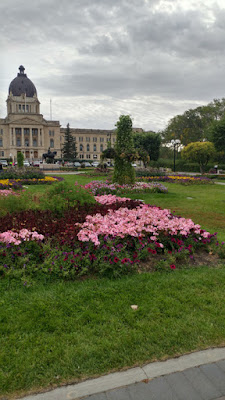 I began my bike ride around the lake and saw, on an area of grass across from the legislative building, a makeshift memorial to another young man who had died by suicide. Twenty-year-old Samwel Uko had drowned in the lake in May. Uko had sought care for mental health issues at a local hospital and had been turned away twice during this pandemic. 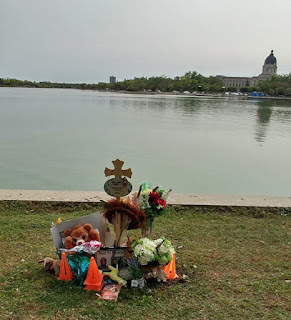 The health authority later apologized for its actions. No one had been allowed to go into the hospital to support him or explain the need for his admission. This part of the sad story had hit me especially hard. As one who has made many trips to hospital either with loved ones or to seek treatment myself, I know the crucial role of loved ones as advocates and supports for the patient in health care settings. We have to do better than this.

The rest of my bike ride around and near the lake was thankfully uneventful, punctuated with stops to admire the lake and the changing colours of fall. 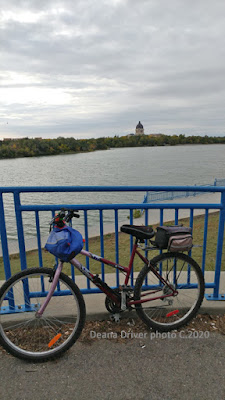 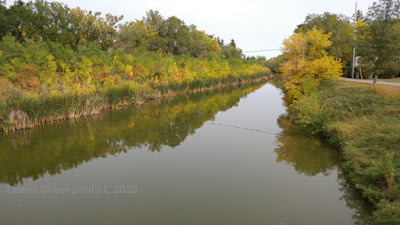 Autumn is a time for change on the Prairies. As we prepare for another winter, I hope and pray that we will be kinder, more compassionate and caring of our fellow humans.

Posted by DriverWorks Ink at 1:26 PM