Ah, Halloween. A time for ghosts and goblins... and ingestion of considerable calories in tiny, bite-sized chocolate bars ... the secret location of which only you and the other adult(s) in your home know for sure. 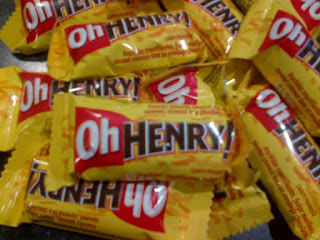 It is always on this day of the year that we think of the Halloween Diet humour column written by the late Ron Petrie, published first in the Regina Leader-Post on October 30, 2004 and then again on page 210 of our Running of the Buffalo book of Ron Petrie's wonderful, witty columns.

Here, for your enjoyment, is Halloween Diet by Ron Petrie:

Today I come to you with the most fantastic news in the entire history of miracle weight-loss diets, as follows:

Q: Yes. I have a question. What was that, Norwegian?

A: What? “Umnph ew, Appums”? No, not Norwegian. “Umnph ew, Appums” is an approximation, a phonetic attempt to transcribe human speech as the human mouth savours the great taste of a whole fudge particle rolled in a roasted peanut speck and smothered in two jots of creamy milk chocolate, while, at the same time, the human brain attempts to speak, in so many words (three words, two of which – “Umnph ew” -- are an extremely impolite phrase) its thought that the human body no longer requires the services of Dr. Atkins (“Appums”), founder of the absurdly popular low-carb diet. A much more effective weight-loss program, the last diet North Americans will ever need, has been discovered.

A: Yes. Of course. The most fantastic news, the lasting cure for the obesity epidemic of the western world:

You know those Halloween-size Oh Henry bars? What you do is, you gobble down those little babies like nobody’s business. Help yourself. Pig out. Mmmm-mmm. You go, boy! You go, girl! Woo-woo!

Then watch the pounds melt away.

Q: But aren't peanuts, fudge and chocolate all fattening?

A: Doesn’t matter. All that matters is size. Perhaps you have not noticed, but this year’s trick-or-treat version of all the popular chocolate bars looks even smaller than it was in 2003, just like it was the year previous, and the year before that, down through every known Halloween, ever diminishing at the same exponential shrinkage rate as both the type size in newspapers and that dangblasted wee screw that's always working loose in the hinges of the bifocals. Probably if you go back in time to the very first Halloween, when the Pilgrims, as a gesture of appreciation to the Indians for their kindness in helping the colony survive its first season in a harsh new land, put on disguises and went from teepee to wigwam with open pillow cases demanding sweets or else -- back then, your so-called “candy bar” was probably nothing more than a simple chocolate-covered wafer twice the size of the Mayflower and emblazoned with the words “Kit Kat”. And next year, goodness knows, in 2005, if the trend continues, the kids will still dump out their bags to see exactly what treats they managed to score, expect to do so, instead of running back home, they'll be running back to Saskatoon, for the help of the synchrotron microscope.

Or the planet will have blown up, on account of Hershey having successfully split the chocolate atom.

Q: So? Rather than tear into one pre-1974, standard-size tasty Oh Henry bar, nowadays you scarf back the equivalent weight in the teensy-weensy edition, or roughly 17 dozen. You are still ingesting in the same number of calories. Like, duh. What are you, wrong in the head, stupid on arithmetic, a complete scientific moron, more confused than a daylight saving time advocate?

Q: You're right. Sorry. Let me rephrase. So, what are you, wrong in the head, stupid on arithmetic, a complete scientific moron?

A: Actually, none of the above. Your calorie comparison is quite correct. What you have forgotten, however, is that each Halloween Oh Henry is individually wrapped. It is a fact of biophysics that every human activity, be it jogging, breathing, weight-lifting, winking -- no matter how great, no matter how small -- requires an expenditure of energy, except for column-writing. The very action of fetching and unwrapping a minuscule Oh Henry from the pile resting on your belly as you sprawl out on the sofa burns off more calories -- nano-calories, actually -- than contained in the entire sub-atomic chocolate bar itself. You actually eat your way to a slimmer you.

Why, this actually makes sense, at least mathematically. What practical test results have you?

A: Me. I have been subsisting for more than a week now on the ultra-peewee Oh Henry bars that my wife keeps purchasing and failing to hide properly. And look at me, here I go again, reaching for yet another one. I cannot get enough of the delicious little beggars. Clearly I am working up a power appetite, running a calorie-deficit, wasting away, and believe me, it's not from aerobic workout.

Q: Or it could be that you're in a guilt spiral, rationalizing your gluttony.

A: Probably. But, hey, what the umnph?

Originally published in the Regina Leader-Post on October 30, 2004 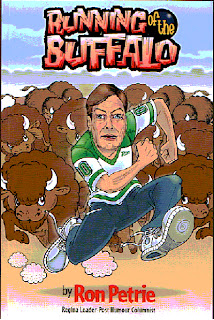